I am not endorsing anyone for the Third District House of Representatives seat in North Carolina. However, I heard Allen Thomas speak tonight, and I was impressed by a lot of what he had to say.

Mr. Thomas described himself as a fiscal conservative – he stated that the current national debt is unacceptable. We need to reexamine the role we have played as the world’s policemen and work toward a shared mandate to deal with terrorism and rogue nations.

On immigration Mr. Thomas stated that as a sovereign nation we need to secure our borders. He also noted that illegal immigration has created a shadow economy in certain areas of our economy and that needs to be considered in dealing with the immigrants who have been here for a long time who are not legal citizens. We need to bring that economy into the mainstream of the American economy.

On the issue of life, Mr. Thomas stated that his personal view is to protect life, but he did not want to see America go back to a time when abortions were illegal and performed in back alleys.

Mr. Thomas also pointed out the need for politicians of both parties to work together across the aisle.

Mr. Thomas is a very well-spoken, charismatic candidate. I disagreed with him on some basic issues, but he had some very good ideas.

Chinese holdings of U.S. Treasury securities are 11.5 percent below their peak level which was attained in November 2013, according to data published by the U.S. Treasury.

We are still carrying way too much national debt, and that will be a more serious problem as the federal reserve raises interest rates. However, although China is holding less of our debt, it is still the the top foreign holder of U.S. Treasury securities.

While China remains the top foreign owner of U.S. government debt—despite its declining holdings—the Federal Reserve still owns far more. As of the end of November, according to the Federal Reserve, it owned $2,324,589,000,000 in U.S. Treasury securities.

It’s time to cut government spending and get out of debt!

The 2016 Republican Platform includes the following on Page 8:

Our national debt is a burden on our economy and families. The huge increase in the national debt demanded by and incurred during the current Administration has placed a significant burden on future generations. We must impose firm caps on future debt, accelerate the repayment of the trillions we now owe in order to reaffirm our principles of responsible and limited government, and remove the burdens we are placing on future generations. A strong economy is one key to debt reduction, but spending restraint is a necessary component that must be vigorously pursued.

It’s the spending–not the revenue–that is the problem. So what are Republicans doing about it?

On May 8, 2018, The Washington Times posted the following:

House GOP leaders vowed Tuesday to speed President Trump’s new $15.4 billion spending cuts proposal through their chamber, brushing aside complaints from Democrats and some Republicans over the trims the White House wants to see.

So what happened when the bill reached the Senate?

Senators voted Wednesday to block President Trump’s $15.4 billion spending cuts package, with lawmakers saying it trimmed the budget too much.

Brushing aside administration promises that the cuts were chiefly to money that was never going to be spent, the Senate voted 50-48 to keep the bill bottled up. Two Republicans — Susan Collins of Maine and Richard Burr of North Carolina — joined Democrats to defeat the package.[…]

So if the Republicans won’t even cut spending on money that wasn’t even spent, why in the world should I vote for them? Didn’t they read their own platform? How long could you run up your credit card before creditors would start clamoring for their money? Is the government any different? 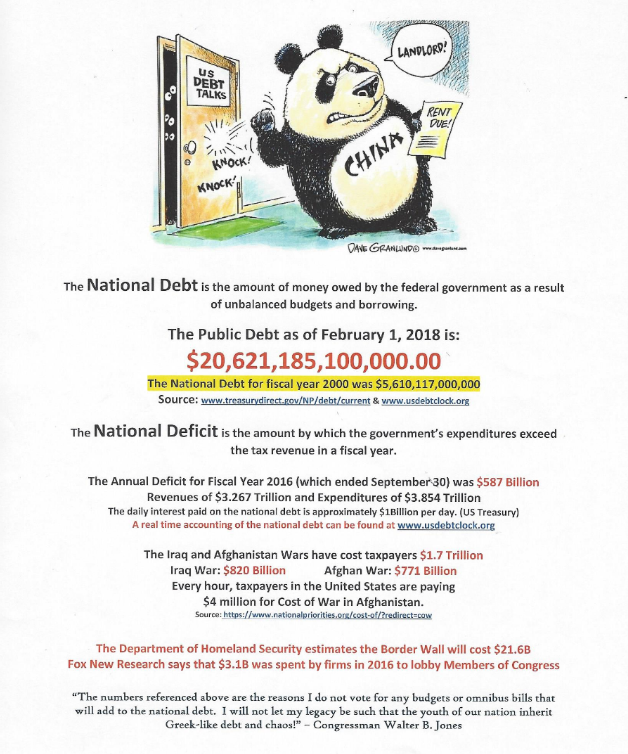 The Democrats are screaming that the tax bill will add to the national debt. It might. Or it might not–depending on the growth of the American economy unleashed by lower taxes. However, there are some numbers that those Democrats might want to consider before they scream too loud.

A website called The Balance posted the following and updated it earlier this month: 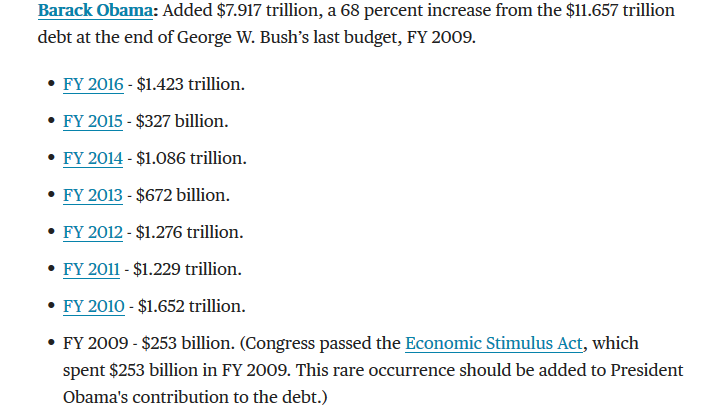 The major complaint that the Democrats have with the tax bill is that it is projected to increase the U S debt by $1.5 trillion. However, when compared to Obama President Trump already nearly has it covered.

The article at the Gateway Pundit includes the following: 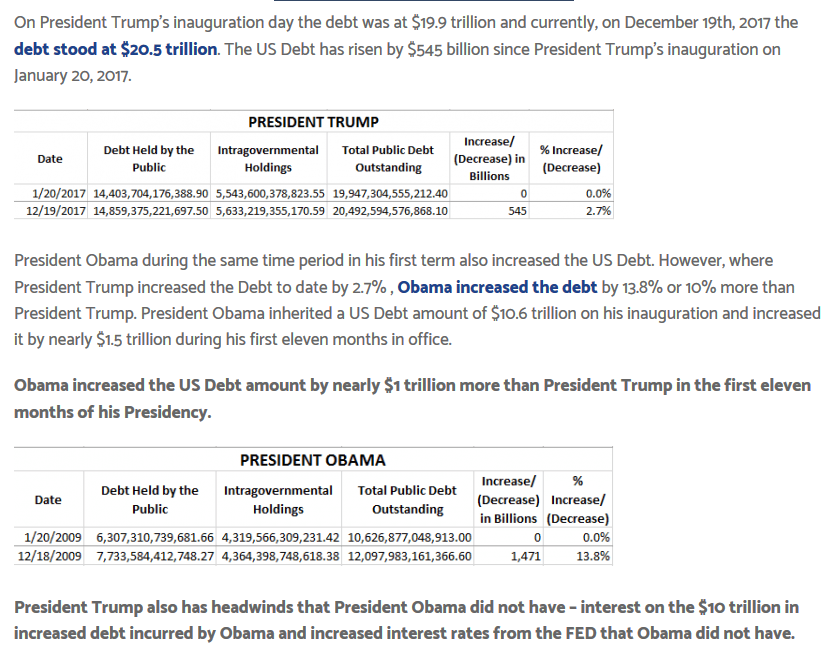 The Gateway Pundit also points out:

The FED kept interest rates at near zero percent for most of Obama’s eight year term. Since President Trump was elected the FED have increased rates four times by a total of 1%. Increases in the Fed Funds Rate increase the cost of borrowing and the largest borrower in the world is the US government. With $20 trillion in debt, a 1% increase in interest payments equals $200 billion in annual interest payment increases.

President Trump has already paid for nearly all of the tax cuts. Aside from that fact, whose money is it anyway? The tax cuts will allow Americans to keep more of what they have earned. That is a good thing.

Somehow this news has escaped the mainstream media.

The article also includes the following: 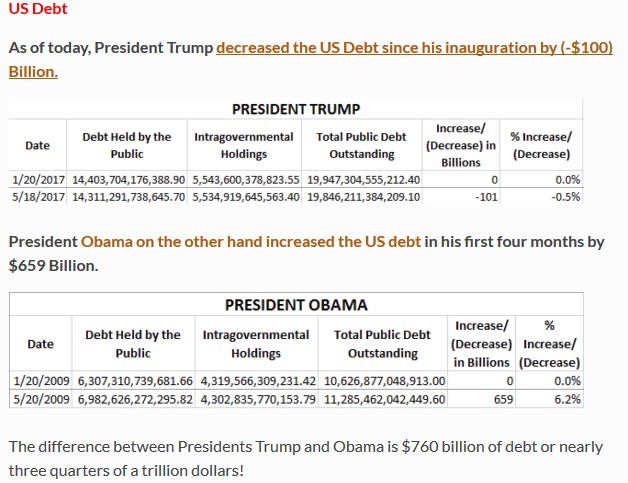 The article goes on to list job statistics and home sales statistics. I strongly suggest that you follow the link to read the entire article.

President Obama left President Trump with a weak economy and all sorts of domestic and foreign policy nightmares.  To date President Trump has had little time to address all of these messes but if he handles these as well as he has the economy Americans will soon be in a much better and safer place.

Overall based on the above data it is clear that President Trump is doing a solid, if not excellent job.

The mainstream liberal media won’t report this, but when looking at the economy, President Trump the businessman thumps the former community organizer Barack Obama.