Yesterday The Washington Free Beacon posted an article about the impact of corporate tax rates on entrepreneurship. The article notes that as the corporate tax rate increases, the number of start-up companies decreases.

Entrepreneurship is negatively impacted by higher corporate tax rates, according to a study from the Federal Reserve.

“While there are many actions governments may take to affect entrepreneurship, few are as important or contentiously debated as the setting of tax policy,” the paper explains. “Taxes are viewed by many as the primary lever elected officials have at their disposal to change the business environment, promote growth, and encourage innovation.”

The study also points to previous research that finds self-employment is affected by how complex the tax code is. Corporate tax rates reduce research and development and new product development.

If this study is accurate, we are going to have substantial economic growth in America as the corporate tax cut begins to take effect. Like him or not, President Trump is a businessman, and a rather successful one. I suspect he was already aware of the relationship between corporate taxes and start-up companies.

Just for the record, I was talking to someone last night who has been a Trump supporter since he announced his candidacy. She said something to me that I think is very astute–“Trump had to be the candidate–we needed a mud wrestler to fight the Democrats. The other Republican candidates wouldn’t do it.” That is an amazing (and true) statement.

Breitbart is reporting today that the Federal Reserve Bank of New York is reporting that businesses in New York have reduced their number of employees due to ObamaCare.

Asked whether they were changing their health plans in response to Obamacare, three in five respondents — in both the manufacturing and service sector surveys — said they were. The most widely reported adjustments involved higher deductibles, increased co-pays, and higher out-of-pocket maximums for employees.

About 83 percent of firms indicated that they would be paying higher total healthcare premiums in 2017. As a result:

When asked if they were making specific changes to certain fundamental business measures, owing to effects of the Obamacare, “roughly 17 percent of service sector firms and 21 percent of manufacturers said they were reducing the number of workers in response to” Obamacare. The vast majority of respondents in both surveys said they were not changing the proportion of part-time workers that are ineligible for Obamacare.

This is another example of the impact federal policies and regulations have on the economy. The American economy functions best when the free market is allowed to work–ObamaCare short circuits that process. We need a new administration in Washington that will lessen the burden the government places on Americans and American businesses. It is obvious that Hillary Clinton will be four more years of government burdens on Americans. At some point the economy will collapse under that burden. A vote for Hillary is a vote for the collapse of the American economy.

The Empire State general business conditions index nose-dived to a reading of negative 14.9, from positive 3.9 in July, marking the worst level since April 2009, the New York Fed said. The index, on a scale where any positive number indicates improving conditions, was far worse than the positive 4.5 forecast in a MarketWatch-compiled economist poll. 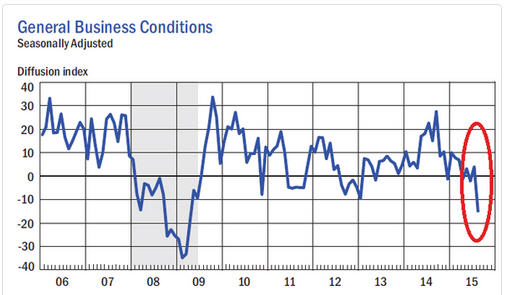 The only good news in this is that the decline may cause the Federal Reserve to delay interest increases for a while.