On Friday, The Federalist posted an article about The Born-Alive Survivors Protection Act.

The Born-Alive Survivors Protection Act is not about restricting abortions but about giving newborns a chance to survive no matter where they are born, said Sen. Ben Sasse, the bill’s lead co-sponsor, at a Senate Judiciary Committee hearing Tuesday.

During the hearing, called “The Infant Patient: Ensuring Appropriate Medical Care for Children Born Alive,” Republican senators questioned why a baby born in a hospital should be treated differently than a baby born in an abortion facility. Democrats, lacking an answer, changed the subject.

The article includes the testimony of some of witnesses. Three of the witnesses who were involved in the medical profession related some of the incidents where babies were tossed aside after being born alive during an abortion.

The article also includes the testimony of those who opposed the bill.

Fatima Goss Graves, president and CEO of National Women’s Law Center, argued instead that, “Access to reproductive health care, including abortion, is a key part to an individual’s liberty, equality, and economic security.” Since 2010, state lawmakers have passed more than 450 abortion restrictions designed to block access to abortion, she said.

Sasse tried to clarify numerous times that this legislation was not about abortion but about what happens after an abortion. Neither Graves nor the Democratic senators in the room agreed. Graves said she believes the bill is on a continuum of restrictive abortion measures. Sen. Mazie Hirono, D-Hawaii, agreed, saying that women’s health is under attack every day, especially under Trump, and that this bill is the latest in a decades-long threat against abortion.

Instead of arguing for or against protecting infants born alive, Sen. Kamala Harris, D-Calif., argued U.S. health care is biased against African-American women. Instead of fighting for legislation that protects infants born alive, Harris argued we should make taxpayers provide better housing and food for pregnant women.

While Harris might be right that pregnant women need more support, this is not the question at hand. Right now, if a doctor neglected to provide a pregnant woman needed care, he would be prosecuted. This is not true for the child in her womb. Instead of addressing this disparity, Harris simply changed the subject.

Abortion is a million-dollar business. It is also an industry that makes large donations through Political Action Committees (PAC’s) to Democrat campaigns. We are not likely to see Democrats vote against abortion and risk those campaign donations.

I am strongly pro-life. I believe that the only time an abortion should be performed is when the pregnancy presents a physical threat to the mother. Those instances are rare and could easily be dealt with in a hospital. Those instances would also not result in a multi-million-dollar abortion industry.

Yesterday The Washington Examiner reported that the Democrats had blocked a vote on a bill called the Born-Alive Abortion Survivors Protection Act (S.311). Because of Senate rules, a bill needs 60 votes in order to be brought to the floor to be voted on (that is based on the idea of a filibuster except people no longer stand up and talk for hours). Republican Ben Sasse wanted a vote on S.311, but there were only 53 Senators in favor of voting for the measure (translated loosely that means that there were only 53 Senators willing to go on the record on treating infants who survive abortions). The bill was not perfect. There were some things I would have been very uncomfortable with–I don’t like the idea of doctors being sued or arrested for actions taken in the operating room. However, it seems strange to me that people would be more likely to help a puppy found on the side of the road than a baby who survived and abortion attempt. Most Republicans voted for a vote on the bill. A few Democrats voted for a vote.

In view of recent statements by the Governor of Virginia and the Governor of New York on abortion, some form of this bill is probably necessary. I hope we will see some form of the bill pass in the future. However, it is a sad commentary on our society that a stranded puppy would be more likely to receive care than an aborted baby.

The Daily Caller today is reporting that protesters at the Supreme Court were prepared to protest whoever President Trump nominated for the Supreme Court. One of the interesting traits of all of these ‘spontaneous’ protests the left engages in is that the majority of the signs are professionally printed. Well, what do you do when you don’t have enough information to preprint the signs? You improvise! 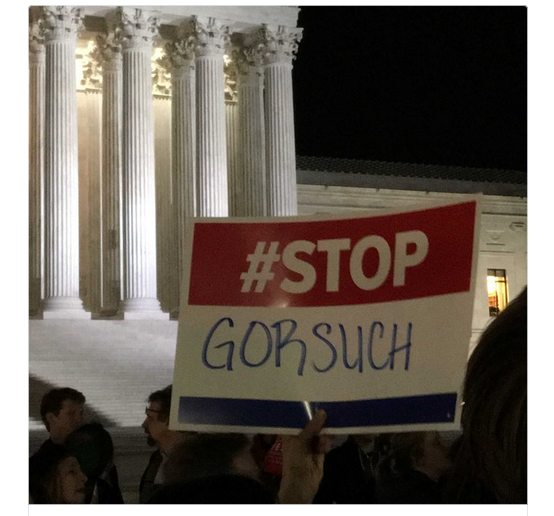 “Went to the Supreme Court to talk to the protesters. But it turns out to be a Mad-Lib protest. #Fill-In-The-Blank,” the senator  ((Nebraska Sen. Ben Sasse)) tweeted with a picture reading, “Stop Gorsuch.” The sign, however, only had the word “Stop” printed on it, with “Gorsuch” added after his name was announced in marker.

Sasse then tweeted, “By the way, protestors- Among those who were in the Senate when Gorsuch was last unanimously confirmed: *Obama *Biden *Clinton & *Schumer.”