On Saturday, Breitbart posted an article about the Biden administration’s explanation for the drop in the Workforce Participate Rate in July. The explanation was about on a par with ‘the dog ate my homework.’

Claim: The decline in the labor force participation rate fell in July because fewer teenagers were working.

On Friday, after the Department of Labor’s jobs numbers showed that the labor force participation rate declined from 62.2 percent to 62.1 percent despite employers taking on 528,000 new workers, White House spokesperson Karine Jean-Pierre claimed that the decline as “about teenagers.”

The article includes a Fact Check of the claim that teenagers were at fault:

If the Inflation Reduction Act becomes law, you can expect the Workforce Participation Rate to decline further.

Now that Arizona Senator Kyrsten Sinema has agreed to vote for it, the Inflation Reduction Act will probably pass the Senate and become law. That is not good news for Americans.

The Conservative Treehouse points out some of the changes that were made to the law to get Senator Sinema to agree to vote for it:

Arizona Senator Kyrsten Sinema has announced her support for the senate climate change spending and tax proposal after some modifications to the new taxation.

To support the hedge fund donors, Senator Sinema insisted the carried interest loophole tax provision be removed and instead replaced with a corporate tax on stock buybacks.  Any time a corporation wants to buy back their own shares of stock, they will now pay the U.S. government a tax for doing so; at least that’s the ¹intent.

[¹Note: taxing shares of company stock will never work, because that’s exactly what shell companies were designed to avoid. Set up a child shell company to purchase the stock and the parent company doesn’t pay taxes on the child’s purchase. It’s a shell game]

Additionally, according to reports, there is some kind of agreement to modify the 15% corporate minimum tax. Details unknown. Bottom line, Senator Sinema now supports the $700 billion climate change spending and tax proposal.

The Tax Foundation has an analysis of exactly what the financial impact of the bill will be:

Last-week’s Democrat-sponsored Inflation Reduction Act (IRA), successor to the House-passed Build Back Better Act of late 2021, has been touted by President Biden to, among other things, help reduce the country’s crippling inflation. Using the Tax Foundation’s General Equilibrium Model, we estimate that the Inflation Reduction Act would reduce long-run economic output by about 0.1 percent and eliminate about 30,000 full-time equivalent jobs in the United States. It would also reduce average after-tax incomes for taxpayers across every income quintile over the long run.

By reducing long-run economic growth, this bill may actually worsen inflation by constraining the productive capacity of the economy.

Our analysis contains estimates of the budgetary, economic, and distributional impacts of the Inflation Reduction Act as specified in bill text provided on July 27.

Using the General Equilibrium Model, we estimate that the tax provisions, IRS enforcement, and drug pricing provisions in the bill would increase federal revenues by about $656 billion over the budget window, before accounting for $352 billion in expanded tax credits for individuals and businesses, resulting in a net revenue increase of about $304 billion from 2022 to 2031.

Excluding the anticipated revenue from increased tax compliance and the drug pricing provisions, the bill would lose about $126 billion in revenue over the budget window. 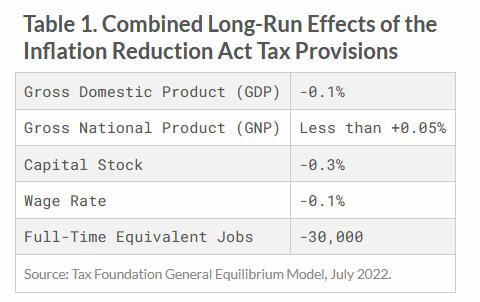 The bill also includes almost $80 billion in appropriations for the Internal Revenue Service to put toward taxpayer services and enforcement. I suspect those of us in the middle class will feel that change. Even if your taxes are done correctly to the penny, the IRS can make you very uncomfortable. My husband and I experienced that after we donated to the tea party. The next year we were audited. We sent them all the applicable information, and they delayed the case for a year. They couldn’t find anything wrong, but they took a long time admitting that. The IRS does not need more money–it needs to go away and have our tax code replaced by something that people can understand and can fit on one sheet of paper.

A website focused on English grammar lessons posted the following in May 2022:

The expression “if it ain’t broke, don’t fix it” originates from the writings of Thomas Bertram Lance. Lance was the Director of the Office of Management and Budget in the Jimmy Carter administration in 1977. The newsletter of the US Chamber of Commerce, Nation’s Business, quoted Lance as saying the following in May 1977.

Bert Lance believes he can save Uncle Sam billions if he can get the government to adopt a simple motto: “If it ain’t broke, don’t fix it.”

However, while Lance gets the credit for popularizing the expression, its origin goes back to a colloquial saying from the southern states. The Texas newspaper, “The Big Spring Herald,” published the following in an article in December 1976.

“We would agree with the old Georgia farmer who said his basic principle was ‘If it ain’t broke, don’t fix it.’”

The expression comes to mind when reading an op-ed in The Wall Street Journal written by Jason Riley and posted on Tuesday.

“During Trump’s first three years in office, median household incomes grew, inequality diminished, and the poverty rate among Black people fell below 20% for the first time in post-World War II records,” the Journal reported in October 2020. “The unemployment rate among Black people went under 6% for the first time in records going back to 1972.” Minorities weren’t the only beneficiaries of this boomlet. Between 2017 and 2019, wages for the bottom 10% of earners grew at more than double the rate they did during President Obama’s second term.

This record is all the more impressive because it defied expectations. The growth of gross domestic product during Mr. Obama’s final year in office was only about half of what it had been a year earlier, which prompted no shortage of doom-and-gloom economic forecasts for the Trump presidency. Nevertheless, in 2017, 2018 and 2019, the unemployment rate came in below what the Federal Reserve had predicted, while GDP was higher than anticipated.

…Lower corporate tax rates were intended to reverse the downward trend in business investment, and following their implementation major companies announced wage hikes, bonuses and 401(k) match increases. In the two-year period after the 2017 tax reform passed, household incomes rose by more than they had in the previous eight years combined.

The article explains that the Inflation Reduction Act is the exact opposite of the policies that resulted in the growth of the economy and will have a negative impact on growth:

The reason this history is important is because Democrats, via the Inflation Reduction Act unveiled last week, want to raise the taxes that Mr. Trump cut. No matter what it’s called, the legislation is another tax and spending bonanza that will do little if anything to reduce inflation. But passage could discourage the kind of business investment we saw before Covid. And because corporate levies are borne mainly by employees, higher taxes on businesses can also lead to lower wages and less hiring.

Congress needs to take an economics course and a history course.

The Biden administration is claiming that the Inflation Reduction Act will reduce inflation, help bring down the deficit, and not raise taxes on any American who makes less than $400,000 a year. That’s a really great idea. Unfortunately it’s not true.

The Daily Caller posted an article on Monday that explains what the bill will actually do. The article cites the Congressional Joint Committee on Taxation (JCT) as the source of its information:

That may not be a significant amount, but it is a tax rate on every American who pays taxes.

Senate Finance Committee Chair Ron Wyden’s spokeswoman Ashley Schapitl pushed back against the estimates, arguing that the JCT analysis is incomplete since “it doesn’t include the benefits to middle-class families of making health insurance premiums and prescription drugs more affordable,” Politico reported.

White House press secretary Karine Jean-Pierre made a similar argument Monday when pressed on the incongruities between the JCT estimates and Biden’s claims.

“The JCT’s report that we’re seeing is incomplete because it omits the actual benefits that Americans would receive when it comes to prescription drugs, when it comes to lowering energy costs like utility bills,” Jean-Pierre said.

The promise made was that the bill would not raise taxes. It raises taxes. The other savings may or may not happen. Green energy has been shown to increase utility bills–not decrease them, and a lot of money in this bill goes toward increasing America’s dependence on green energy.

But it remains unclear how President Biden’s initial claim that taxes are not going to go up on those making under $400,000 dollars squares with JCT’s data, even if there are certain “indirect benefits” like “drug-price savings,” “mitigating the climate crisis” and “deficit reduction.” Tax rates on at least some individuals making under $400,000 will still increase, according to the JCT, a bipartisan committee, contrary to Biden’s claim.