Actually, the Obama Administration targets the elderly, and women and children first. Today’s American Spectator posted an article about a recent announcement from the Centers for Medicare and Medicaid Services (CMS) that it plans to cut an extra 2.2 percent from the Medicare Advantage (MA) program. This new cut, which came as a surprise to everyone except Obama’s health care commissars, will be added to the $200 billion in cuts Obamacare has already mandated for MA. What does this have to with low-income and minority seniors? The administration’s new Medicare cuts will come directly out of their pockets.

Medicare Advantage is one of the most popular health care plans among senior citizens. It is successful because it involves competition in the private sector.

… The MA plans are already taking a huge hit pursuant to Obamacare’s $200 billion cut, and they will be unable to absorb these newest slashes in the program without passing at least some of the costs to the patients in the form of increased co-pays and deductibles.

And it is by no means an exaggeration to say that these extra out-of-pocket costs will hit the seniors who can least afford them. America’s Health Insurance Plans (AHIP), a trade group to which many MA carriers belong, recently issued a report confirming that reality: “Sixty-one (61) percent of all minority (nonwhite) beneficiaries enrolled in Medicare Advantage in 2011 had incomes of $20,000 or less; 59 percent of African-American and 75 percent of Hispanic Medicare Advantage beneficiaries had incomes of $20,000 or less.”

…”This reduction in funding will leave many vulnerable seniors with fewer benefits, higher out-of-pocket costs, and in some cases the loss of their current MA coverage.”

It will indeed. As AHIP reminds us, “The Congressional Budget Office projects that the reform law’s payment cuts alone will result in three million fewer people enrolled in Medicare Advantage.” The group goes on to point out that Obamacare is already expected to increase the out-of-pocket expenses endured by MA enrollees: “Actuaries at Oliver Wyman estimate that the health insurance tax will result in seniors facing $220 in higher out-of-pocket costs and reduced benefits next year and $3,500 in additional costs over the next ten years.”

It is time to repeal and replace Obamacare. Otherwise the American health care system will never be able to recover from the damage being done to it.

In an announcement on Friday, however, the Obama administration revealed that it would be significantly reducing funding for Medicare, a move that one health insurance analyst said “would turn almost every plan in the industry unprofitable.”

…According to Richard Foster, former chief actuary to the Medicare program, ObamaCare’s cuts to Medicare Advantage will likely force half of its current participants back into the old Medicare program, originated in 1965. It is estimated that this change will cost Medicare enrollees an average of $3,714 in 2017 alone.

On July 14, 2012, I posted an article (rightwinggranny.com) explaining that the Obama Administration had launched an $8.35 billion “demonstration project” to delay Obamacare cuts to the Medicare Advantage program until after the 2012 election. This was to prevent seniors who were not paying attention from seeing what was actually happening.

To those of us that have followed Obamacare from the start, the cutting of Medicare is not a surprise. The people who were behind Obamacare were known to hold the belief that the group of people the government should spend the majority of their healthcare dollars on are those between twenty and forty–the most productive years. There was a philosophy that the younger and older members of society were not contributing as much as the group between the ages of twenty and forty, and therefore were not entitled to the same quality of healthcare. That is one of many reasons why Medicare is being cut and Medicaid is being increased. One of the other reasons is to redistribute wealth in America. Obamacare has never been about healthcare–it’s about power and wealth redistribution.

On Friday, Forbes Magazine posted an article about the Affordable Care Act’s (ACA) health insurance tax. I hate to admit it, but this is news to me. I didn’t realize that there was an entire new group of taxes in Obamacare that will impact the middle class and the elderly.

…the tax increases that remain on the books will cost taxpayers more than $675 billion over the next ten years. Chief among these will be the sales tax on the purchase of health insurance, totaling $101.7 billion, and making it larger than all the other industry-specific taxes combined.

In fact, Medicare Advantage beneficiaries will see costs rise from $16 to $20 per member per month in 2014 – increasing to between $32 and $42 by 2023. The costs for Medicare Advantage coverage over the next ten years is expected to reach $3,590. Individuals on Medicaid managed care will see increase costs on an average of $1,530 per enrollee between 2014 and 2023.

The Congressional Budget Office (CBO) supports Ignagni and Goodman’s warnings, stating that the health insurance sales tax will be “largely passed through to consumers in the form of higher premiums.” Unfortunately, as Goodman predicts, “this is only one example of many middle income taxes buried in ObamaCare.” The time to repeal and replace is narrowing, with just months now separating us from another massive tax hike that Americans cannot afford.

The following charts are from Forbes.com: 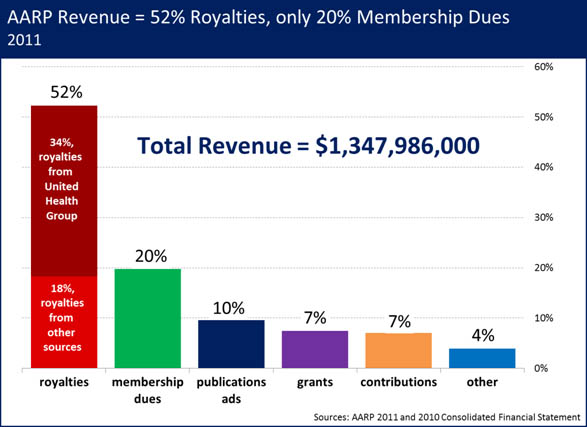 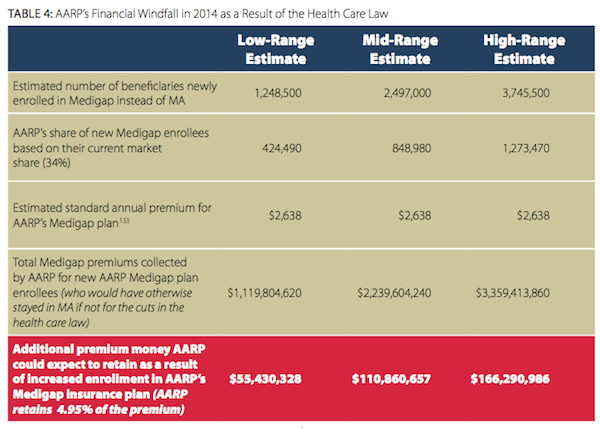 What the chart shows is the profits the American Association of Retired Persons (AARP) will make as the result of the passage of ObamaCare. One of the aspects of ObamaCare is the end of the Medicare Advantage program–the favorite program of senior citizens.

The article at Forbes reports:

Not only did AARP succeed in getting Democrats to balk at Medigap reform. Obamacare’s cuts to Medicare Advantage will drive many seniors out of that program, and into traditional government-run Medicare, which will increase the number of people who need Medigap insurance.

One of the most corrupt administrations in American history has ruined American healthcare. Unless we vote President Obama out of office and repeal ObamaCare, the crony capitalism engaged in by this administration will haunt us for years.

Ed Morrissey at Hot Air posted a story yesterday about one of the quickest position reversals in the history of American politics. Ever since Paul Ryan was chosen as the Republican Vice-Presidential candidate, we have been hearing about the plight of poor granny–destined to a future of inadequate vouchers to pay for care that she will not be able to afford. Oh, the horror of it all. Those evil vouchers. Well, not so fast.

President Obama promised, “And I will — I will never turn Medicare into a voucher.”

But back in Washington, his Health and Human Services Department is launching a pilot program that would shift up to 2 million of the poorest and most-vulnerable seniors out of the federal Medicare program and into private health insurance plans overseen by the states.

The administration has accepted applications from 18 states to participate in the program, which would give states money to purchase managed-care plans for people who are either disabled or poor enough to qualify for both Medicare and Medicaid. HHS approved the first state plan, one for Massachusetts, last month.

Ed Morrissey points out that the plan may actually be a good plan–similar to the Medicare Advantage plan that Obamacare eliminated. The problem is, however, that the choice is taken out of the hands of the American citizen–not something we should encourage our government to do.

The article ends with an update:

Update: A couple of commenters object to my description of this as a “voucher” program — but that’s how Democrats describe Ryan’s plan, and that doesn’t have “vouchers,” either.  It’s a premium-support plan in a federal exchange of insurance plans approved by Medicare for coverage.  That’s what Medicare Advantage did too, and Obama raided it to pay for the Medicaid expansion in ObamaCare.  This plan doesn’t even have the federal exchange that Ryan envisioned, but fifty different exchanges doling out federal dollars.  Like I wrote, the plan and the experiment is worth trying, but it’s precisely the kind of push into private insurance that Obama swore the day earlier he’d never do … and he’s doing it with the poorest seniors with only an opt-out in some states rather than the opt-in that Ryan’s plan provided.  I’ll put quote marks on “voucher” in the headline, but this mechanism only differs from Ryan’s in that the exchanges get managed by the states rather than Medicare.

Yesterday the Washington Free Beacon posted an article about the changes to the Medicare Advantage program that will occur under Obamacare.

Recently, the Obama Administration launched an $8.35 billion “demonstration project” to delay Obamacare cuts to the Medicare Advantage program until after the 2012 election. Because of this “demonstration project,” many senior citizens will not realize that their medicare has been cut until after the election. The money cut from Medicare is not to make Medicare more solvent–it is to fund the new entitlement programs included in Obamacare. The Government Accountability Office (GAO) has asked that the “demonstration project” be cancelled because it does not conform to the principles of budget neutrality–meaning the money to fund the program is not offset by spending cuts and will have to be borrowed.

“This is a grossly underreported story—one aimed right at what is perhaps Obama’s most vulnerable point: his amazing decision to pay for Obamacare largely by looting from Medicare,” Anderson told the Washington Free Beacon in an email. “What’s more, it ties in the corruption and lawlessness of his administration and hearkens back to the Cornhusker Kickback, the Louisiana Purchase, and Gator Aid.”

It really is a shame that the Supreme Court did not declare all of Obamacare unconstitutional–they could have saved all of us a lot of aggravation! Meanwhile, we need to elect a Congress and a President who will repeal this awful bill and replace it with something consumer friendly and market friendly.

No, this isn’t about the Secret Service scandal or the GSA scandal–it’s about using taxpayer money intended for other things to prevent voters from feeling the impact of Obamacare and voting against President Obama because of it.

Yesterday’s New York Post posted a story about how some of the money intended to implement Obamacare is being spent.

It’s hard to imagine a bigger electoral disaster for a president than seniors in crucial states like Florida, Pennsylvania and Ohio discovering that he’s taken away their beloved Medicare Advantage just weeks before an election.

This political ticking time bomb could become the biggest “October Surprise” in US political history.

But the administration’s devised a way to postpone the pain one more year, getting Obama past his last election; it plans to spend $8 billion to temporarily restore Medicare Advantage funds so that seniors in key markets don’t lose their trusted insurance program in the middle of Obama’s re-election bid.

The money is to come from funds that Health and Human Services is allowed to use for “demonstration projects.” But to make it legal, HHS has to pretend that it’s doing an “experiment” to study the effect of this money on the insurance market.

That is, to “study” what happens when the government doesn’t change anything but merely continues a program that’s been going on for years.

Obama can temporarily prop up Medicare Advantage long enough to get re-elected by exploiting an obscure bit of federal law. Under a 1967 statute, the HHS secretary can spend money without specific approval by Congress on “experiments” directly aimed at “increasing the efficiency and economy of health services.”

I think this should be included on the list of reasons why the federal budget needs to be cut drastically. The taxpayers’ money is being spent irresponsibly, and we need to make sure Washington has less money to spend.