Breitbart posted an article last night which detailed the biggest lie told in the Democratic debate in Iowa.

Blue-collar and white-collar Americans “are being clobbered, they’re being killed,” former Vice President Joe Biden claimed at the January 14 Democrat debate in Iowa.

However, unemployment is at record lows, many sidelined Americans are getting jobs, and blue-collar wages are rising at rates not seen for many years amid President Donald Trump’s new curbs on legal and illegal immigration.

Working-class people — where I come from in Pennsylvania, the places I come from in Delaware — I have great support. I have support across the board, and I’m not worried about taking on Donald Trump at all. And with regard to the economy I can hardly wait to have a debate with him.

Where I come from — the neighborhoods I come from — they’re in real trouble: working-class people and middle-class people. When the middle class does well, [the] working class has a way up and the wealthy do well. But what’s happening now: they’re being clobbered, they’re being killed. They now have a situation where they [believe] — the vast majority believe — their children will never reach the stage that they reached in economic security.

I love that [economic] debate because the American public is getting clobbered. The wealthy are the only ones doing well. Period. I’m looking forward to the economic debate.

The article reports the facts:

Wages for blue-collar Americans rose by 4.3 percent in 2019 — or 2.7 percent after inflation — in President Donald Trump’s tightening labor market, according to a December report by Goldman Sachs.

The wage gains come amid very low inflation of just 2.1 percent in December.

…Blue-collar wages are rising faster than white-collar salaries because of different demands from employers, said Tom Donohue, the CEO of the U.S. Chamber of Commerce. “White-collar wages have been moving up over time, a bit, and the demand there, because of technology and other things, is not as high as the demand [for blue-collar skills]. … It’s a reality of the market,” he said January 9.

But Biden wants to increase the flow of foreign workers who will reduce wages for Americans.

“Biden will work with Congress to first reform temporary visas to establish a wage-based allocation process and establish enforcement mechanisms to ensure they are aligned with the labor market and not used to undermine wages,” said Biden’s plan for legal immigration. “Then, Biden will support expanding the number of high-skilled visas and eliminating the limits on employment-based visas by country, which create unacceptably long backlogs,” the plan says.

Hopefully enough Americans are familiar with the actual facts to believe this garbage.

Ed Morrissey posted an article at Hot Air today about the latest economic numbers. As usual when a Republican is President, the ‘experts’ were surprised that the numbers were better than expected.

It’s not great news for the White House, but it could have been a lot worse. The US economy’s growth slowed to 2.1% in the second quarter, down a full point from Q1. However, with economists predicting a recession right around the corner, the growth is still substantial enough to look positive:

Real gross domestic product (GDP) increased at an annual rate of 2.1 percent in the second quarter of 2019 (table 1), according to the “advance” estimate released by the Bureau of Economic Analysis. In the first quarter, real GDP increased 3.1 percent.

The Bureau’s second-quarter advance estimate released today is based on source data that are incomplete or subject to further revision by the source agency (see “Source Data for the Advance Estimate” on page 2). The “second” estimate for the second quarter, based on more complete data, will be released on August 29, 2019.

The increase in real GDP in the second quarter reflected positive contributions from personal consumption expenditures (PCE), federal government spending, and state and local government spending that were partly offset by negative contributions from private inventory investment, exports, nonresidential fixed investment and residential fixed investment. Imports, which are a subtraction in the calculation of GDP, increased (table 2).

The deceleration in real GDP in the second quarter reflected downturns in inventory investment, exports, and nonresidential fixed investment. These downturns were partly offset by accelerations in PCE and federal government spending.

“Not bad” is a little bit of an understatement, actually. It’s pretty good, especially in the context of the global economy. That’s the bigger anchor, especially the trade disputes that at least for one quarter hit our exports hard.

The steady growth with low inflation should result in the Federal Reserve lowering interest rates in the near future.

The Washington Times posted an article today about the Farm Bill that was recently passed. The House of Representatives added a more stringent work requirement to the Food Stamps Program, but the Senate eliminated the requirement. Thus the Farm Bill as it currently stands puts a 20-hour-per-week work requirement only on people between the ages of 18 and 49 who receive food stamps.

President Trump moved Thursday to tighten work requirements for people who receive food stamps, after Congress failed to include the proposal in a $400 billion farm bill that’s headed to the president’s desk.

The Agriculture Department said it is proposing a rule on Mr. Trump’s orders that would move “more able-bodied recipients” of food stamps back into working at least 20 hours per week.

“Long-term reliance on government assistance has never been part of the American dream,” said Agriculture Secretary Sonny Perdue. “As we make benefits available to those who truly need them, we must also encourage participants to take proactive steps toward self-sufficiency. Moving people to work is common-sense policy, particularly at a time when the unemployment rate is at a generational low.”

…Currently, able-bodied adults ages 18-49 without children are required to work 20 hours a week to keep their food-stamp benefits. The House measure would have raised the age of recipients subject to work requirements from 49 to 59 and required parents with children older than 6 to work or participate in job training.

The Labor Force Participation Rate currently stands at 52.9 percent. The Unemployment Rate currently stands at 3.7 percent. Wages at all levels have risen under President Trump. Inflation for 2018 is slightly over 2 percent. There is no reason anyone collecting food stamps cannot find a place to work for 20 hours a week or enter a job-training program that will help them find a job that pays enough for them to get off of food stamps. The Agriculture Department is doing the right thing in looking into strengthening the work requirements to collect food stamps.

Here is the chart: 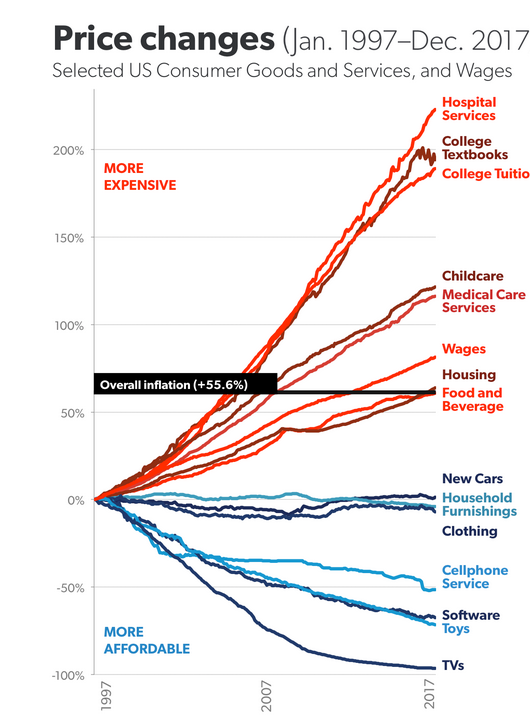 The chart was put together by economist Mark Perry, who tracked the changes in prices over the past 20 years for various goods and services. (Perry’s blog, Carpe Diem, is a must read for anyone looking for clarity on economic matters.)

Note the impact free market capitalism has on inflation–it keeps it under control.

The ones below the inflation line — many of which actually saw prices decline over the past two decades — are all in highly competitive industries: autos, cellphones, clothing, software, TVs, toys. Two that track inflation, not surprisingly since they account for much of the nation’s spending, are food and housing.

But look at the areas where inflation has been surging: they fall into two broad categories: health care and college education. What do these have in common? Both are subject to massive amounts of government subsidies.

In the case of health care, the federal government now accounts for more than 40% of all health spending. It subsidizes care for the elderly, the poor, and now thanks to ObamaCare, the middle class. Given that health care spending makes up almost one-fifth of GDP, this is a big deal.

As to colleges, federal aid has exploded over the past 20 years, climbing 51% since 1997 — after adjusting for inflation — according to the College Board, which tracks these numbers. Last year, loan subsidies, grants and special tax brakes added up to $113.8 billion.

All that subsidy money was premised on the goal of making these things more affordable. The result is, for many, the exact opposite. By paying most of the tab, the government has insulated consumers from the true cost of these things — a recipe for runaway prices.

Yet instead of dealing with the cause, policymakers keep talking about either adding still more subsidy fuel to the fire, or imposing price controls.

If policymakers want to tackle inflation, the first step would be to review those federal policies that are driving it.

Removing the overabundance of government regulations on businesses is good for everyone. We need to elect leaders who will do that.

Yesterday the Washington Examiner posted an article with the headline, “Fun with the Fed: Inflation is low, but the cost of living is up.” Meanwhile, CNS News posted the following graph yesterday: 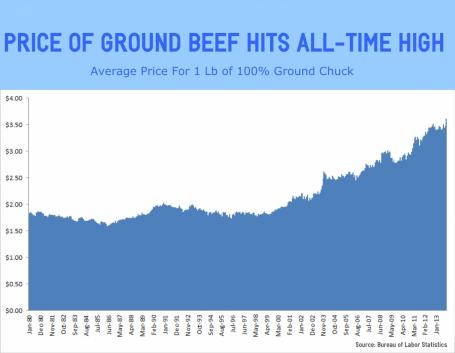 It is hard for anyone who has been in a grocery store in the past year to believe that inflation is low.

From July to August, the “Core Consumer Price Index” did not move. That means zero inflation, if you use the measure of inflation the Federal Reserve uses when setting monetary policy. But core CPI omits volatile prices like food and energy. If you have a family, you’re probably pretty aware that food and utility bills are a big factor.

This is another example of the government manipulating numbers to get the desired result. Any resemblance to what is actually taking place and what the government is reporting is purely coincidental.

The Washington Examiner lists some of the price increases in the last year that impact families trying to live within their budget:

Electricity is up 4.1 percent and gas bills are up 5.8 percent.

Coffee is up more than 50 percent from last year.

The net result is that life has gotten considerably more expensive for me since this time last year. I’m not saying this ought to guide our monetary policy. I’m just saying that core CPI doesn’t track the cost of living.