Bias in news reporting comes in a variety of ways. One way is to leave out critical parts of a story in order to give a totally misleading impression. Unfortunately the news media did that recently in a situation where someone died.

Townhall posted an article that illustrates how harmful and misleading media bias can be.

Media outlets and journalists on social media heavily pushed a story about a woman and her husband drinking fish tank cleaner because it contained chloroquine phosphate after President Trump had mentioned the medicinal version of chloroquine could be used to help treat COVID-19.

After drinking the cleaner, the couple began to feel sick and were rushed to the hospital, where her husband later died and she was put in intensive care. She told NBC News they drank it out of fear of contracting the coronavirus and had heard Trump talking about chloroquine to treat patients.

However, some of the reports and social media left out the fact the couple did not ingest the medicinal form of chloroquine that Trump had said could be used to help cure those infected with the Wuhan coronavirus.

Axios’ story about the incident completely left out the part about them ingesting fish tank cleaner. Their tweet for the original story has been deleted and an editor’s note was added to the story hours after it was first published.

…Journalists on Twitter often left out the part explaining the couple did not use the tablet form of chloroquine, racking up thousands of retweets and likes off of the false premise.

NBC News Correspondent Heidi Przybyla’s tweet about the story went viral, but she did not add the key detail until two hours later and at the very bottom of her thread, which has received far less attention.

The most blatant example of journalistic malpractice was found in a tweet by Axios and the response by Jennifer Rubin: 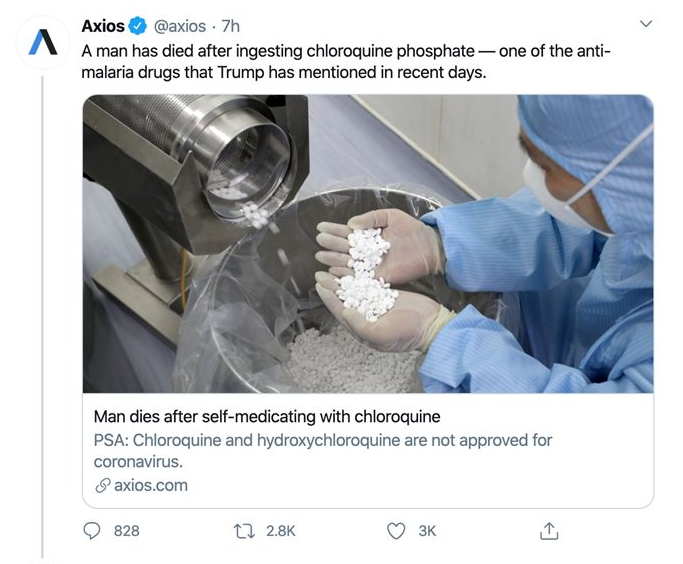 Understand as you read this that the political left would love to see President Trump’s daily coronavirus updates go away. Why? Because when the President talks to the people directly, Americans see a man handling the situation as well as could be expected. The media spin rooms try to spin what was said, but if people see it for themselves, the spin has less impact.

Please follow the link to the article at Townhall. It shows a number of tweets attempting to blame President Trump for the death of the man who drank fish tank cleaner. While the man’s death is a tragedy, no one told him to drink fish tank cleaner. It was a really dumb thing to do. However, the reporting of this tragedy is only one example of how irresponsible our mainstream media has become.

The deep state wants its power back. They see the road to that power in the election of Joe Biden as President. As the campaign continues, there are some valid questions as to whether or not Joe Biden is mentally up to the task of being President, but that hasn’t slowed the momentum of the deep state in trying to put him there.

Breitbart posted an article today based on an article in Axios, a liberal-leaning source, about possible cabinet picks by a President Biden.

…Many of the names would return from the Obama administration, constituting an effective “third term.”

Axios says that former Secretary of State John Kerry could return in that role, or be appointed to a new Cabinet-level climate change position.

Former National Security Advisor Susan Rice — who was never nominated for Secretary of State because of fears she would not survive confirmation after misleading the nation about the Benghazi attacks — could find her way to that position in a potential Biden administration, Axios claims.

There would also be room in the Biden Cabinet for some of his former 2020 rivals, including former South Bend, Indiana, Mayor Pete Buttigieg, who could be UN ambassador, or U.S. trade representative.

Several are also currently under consideration, Axios reports, to be Biden’s running mate, including Sens. Amy Klobuchar (D-MN) and Kamala Harris (D-CA). The final choice may be up to Rep. James Clyburn (D-SC), who delivered the key endorsement that helped Biden win South Carolina and change the direction of the entire Democratic primary.

Susan Rice lied about Benghazi; John Kerry lied about the Iran deal. President Obama did serious damage to the American economy in eight years because of over-regulation and increased taxes. Do we really want to bring the deep state back into power?

It is not yet clear what the hackers found, or precisely what they were searching for. But the experts say the timing and scale of the attacks suggest that the Russians could be searching for potentially embarrassing material on the Bidens — the same kind of information that Mr. Trump wanted from Ukraine when he pressed for an investigation of the Bidens and Burisma, setting off a chain of events that led to his impeachment.

The Russian tactics are strikingly similar to what American intelligence agencies say was Russia’s hacking of emails from Hillary Clinton’s campaign chairman and the Democratic National Committee during the 2016 presidential campaign. In that case, once they had the emails, the Russians used trolls to spread and spin the material, and built an echo chamber to widen its effect.

Note that the emphasis is on the election–the corruption that has already been proven is not mentioned–it’s all about embarrassment.

GRU is responsible for other high-profile hacks of the DNC and John Podesta. Seven GRU officers were indicted in 2018 for conspiring to interfere with the 2016 election.

The hacking attempts against Burisma began in early November, as the Democrats’ impeachment efforts increased the profile of the company and Biden’s conflict of interests.

It is not yet known what the hackers found or what they were looking for. The New York Times says that “experts say the timing and scale of the attacks suggest that the Russians could be searching for potentially embarrassing material on the Bidens.”

So what does this mean? Scott Rosenburg of Axios believes that awareness of the hacks “cuts both ways politically.” There are huge negative implications for Joe Biden and his presidential campaign, since “it means document dumps could happen at any time, with accompanying media frenzy and potentially damaging revelations.” Many on the left still believe—despite all evidence to the contrary—that Trump colluded with Russia in 2016, so Russian involvement with the hacks “means that any such revelations will come pre-tainted with a Russian label,” according to Rosenburg.

Despite the Russian connection, should damaging information be revealed, Biden’s campaign has the most to lose, as his repeated denials of knowledge of his son’s business dealings could be undercut by documentary evidence. New details about how Hunter Biden’s position on the board gave Burisma access to the White House during the Obama years may also be brought to light.

The New York Times is still beating the dead horse of collusion with the Russians (no evidence found in Mueller Report or since).  Unfortunately Americans are being misinformed by what was formerly ‘the paper of record.’

Don Surber posted an article today that included some rather surprising information.

Parscale knows that because people needed to give the campaign their cellphone numbers to get tickets. The campaign then used the information to check their voting record.

…Parscale called the Green New Deal a big juicy steak for the campaign.

Axios limited its report on the interview to Parscale saying, “[Trump] has been very easy to work with this week. He’s been very smiley.

“I was in the White House this week; he served me hors d’oeuvres. That was a first. … [A] little pigs in a blanket, some meatballs. …He gave me a Diet Coke; he was very happy. It was my first [time] in nine years serving, of hors d’oeuvres from the president. Which is safe to say, very good mood.”

Axios was the only outlet (besides Fox News) that I could find with a report on the interview.

Gee, I wonder how the experts missed that last election?

It’s difficult to ignore the economic success of the Trump administration. I suspect those in the deep state will attempt to undermine that success during the next year or so, but there are some fundamental changes in regulations that will make that difficult. The unemployment rate and the workforce participation rate speak for themselves. Salaries at the lower end of the wage scale are going up. People are keeping more of what they earn. The mainstream media is not telling us all of the good news, but people are experiencing better economic times and discounting the media. This President has dealt with an unprecedented assault on our southern border and is beginning to deal with the problem in spite of Congress–not with the help of Congress. The President has also dealt with an unprecedented attack on him personally and on his family. It is time to stop harassing the President and let him lead. The attendance at his rallies are an indication that the public is not listening to the mainstream media–they are doing their own research and drawing their own conclusions.

If we think back to recent (a year) history, Robert Mueller was appointed as a special prosecutor to investigate whether or not there was Russian interference in the 2016 election. He has been searching for a year, and so far has charged two people formerly associated with the Trump Administration with crimes unrelated to the purpose of his investigation. It seems as if he is using his unlimited budget to follow rabbit trails. Now there is a new controversy about some of those rabbit trails.

Yesterday Townhall posted an article about some recent problems with the Mueller investigation.

According to Axios, special counsel Robert Mueller has confiscated thousands of e-mails and communications from President Donald J. Trump’s transition team, including from notable figures such as Jared Kushner and other high profile aides.

“Trump officials discovered Mueller had the emails when his prosecutors used them as the basis for questions to witnesses, the sources said.

The emails include 12 accounts, one of which contains about 7,000 emails, the sources said.

The accounts include the team’s political leadership and the foreign-policy team, the sources said.”

These e-mails supposedly all occurred after  the 2016 presidential election. Mueller’s investigation is explicitly to determine if there was any Russian interference before the election that could have rigged the results for Donald Trump. But, according to Axios’ source “Mueller is using the emails to confirm things, and get new leads.”

If these are the emails of the transition team, they have nothing to do with events before the election–they are the records of the new administration organizing its policies. They are subject to executive privilege and to the Fourth Amendment. It sounds as if neither was honored.

As Fox News notes, Langhofer says that Mueller’s team gained access to the e-mails via the General Services Administration. The Transition team was using the GSA’s office space and e-mails severs. Trump’s attorneys say that in doing so, Mueller may have violated the 4th amendment by asking the GSA for e-mails which were supposed to be private and secure.

According to Reuters, the letter says “career staff members at the agency unlawfully produced TFA’s private materials, including privileged communications, to the Special Counsel’s Office.”