On Wednesday, The Western Journal posted an article about voter turnout in the recent primary elections.

McDaniel (Republican National Committee chairwoman Ronna McDaniel) told Fox News on Wednesday that she believes it bodes well for the general election in November, but she cautioned GOP supporters not to become complacent.

She pointed first to Tuesday’s elections in Pennsylvania.

“The thing that we’re taking away from last night is, first of all, Republicans outpaced Democrat turnout by 100,000 votes. That’s the first time we’ve ever beaten the Democrats in 10 years in this type of primary situation,” McDaniel said.

That would be very good news for the Republicans in the mid-term elections assuming that the mid-terms would be an honest election.

“We know that inflation is hurting average Americans. We know that gas prices are hurting people. We know that there is a baby formula shortage that this administration is not addressing,” McDaniel added.

“It seems that every time a crisis comes up, they’re ill-prepared, and that’s why we’re seeing voters look at Republicans and say, ‘Maybe we need to switch leadership in Washington and put Republicans in charge of the Senate and the House in the midterm elections,’” she said.

The GOP leader is cautious about predicting a red wave in the fall, pointing out that Republicans only need a net gain of five seats in the House to take back that chamber and just one to retake the Senate.

“I don’t want anyone to get complacent,” McDaniel said. “We all need to work hard for every single victory.”

We need a conservative takeover of Congress (whichever party those conservatives belong to) to put an end to the destructive policies of the Biden administration. It’s time to become energy independent again. It’s time to control spending, and it’s time to remove (again) the regulations that make it nearly impossible for businesses to operate easily in America.

On Wednesday, The New York Post posted a list of the top 10 ways President Biden deluded himself during his State of the Union address.

1. FEIGNING to stand up for Ukraine when he publicly told Vladimir Putin last month that a “minor incursion” was tolerable, and when his son Hunter treated Ukraine like a private piggybank during Biden’s vice-presidency.

2. CALLING for unity to a room full of Republicans while falsely claiming that the Trump administration’s 2017 tax cut only helped “the top 1%.”

3. POSING amusingly as an America First nationalist — complete with Trumpian “USA! USA!” chants from his colleagues on the floor. All power to Biden if he follows through on his promised “revitalization of American manufacturing,” but he will be going against his own record.

4. Securing our border: This takes some chutzpah when Biden deliberately dismantled Trump’s hard-won border protections and is still in court fighting the remain-in-Mexico policy.

5. BEATING the opioid epidemic: The “opioid crisis” he anointed as a bipartisan cause was turbocharged when he flung open the southern border to record quantities of fentanyl, a drug which is now the leading cause of death for Americans aged 18 to 45.

6. GASLIGHTING us on the pandemic: “Let’s stop looking at COVID as a partisan dividing line,” said the president who has done nothing but manipulate COVID fear for political purposes, and changed tune only after opinion polls on his handling of the pandemic headed south.

7. BLUNTING gas prices: He’s pulling our leg. Biden boasted about tapping into 30 million barrels of our emergency oil reserves — less than two days’ supply — while not mentioning a word about unleashing our plentiful untapped oil and gas supplies.

9. VALORIZING the military Biden paid tribute to soldiers said to have contracted cancer from “burn pits” — an as-yet unproven claim on which he dwells in hope of a combat-related cause of his own son’s death from brain cancer.

10. MYSTIFYING the world Biden went off script after saying “God bless our troops” at the end of his speech. “Go get him!” he ad-libbed.

It would be wonderful if President Biden actually closed the southern border and acted to lower fuel prices for Americans by using our own resources. However, I think the chances of that are slim to none.

Sent to me in my email: 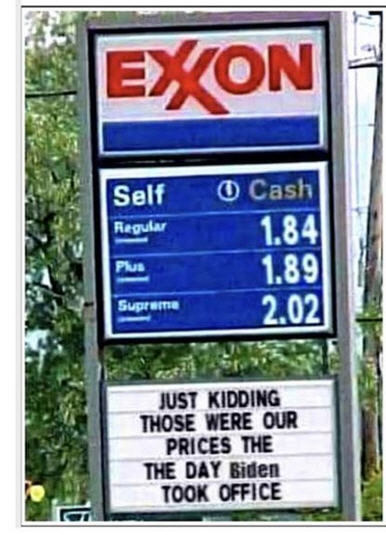 The Gateway Pundit posted an article today about a recent tweet by Elizabeth Warren.

The article includes the following quote from an article posted at The Heartland Institute website on September 19, 2018:

A 2016 Chamber of Commerce study projects that if the fracking revolution of the previous decade had not occurred, 4.3 million jobs would not have been created, the U.S. economy would be $500 billion smaller and residential natural gas prices would be 28 percent higher.

There is also the matter of national security. America now has the freedom to choose its friends without worrying whether or not our oil supply will be cut off. Some of us remember the 1970’s gas lines and high price of gasoline.

The world economy (that includes America) is currently based on fossil fuels. Countries who can supply reasonable priced energy attract manufacturing and businesses which create jobs. The end the production of fossil fuel and fracking in America is to reduce America to the status of a third-world (or lower) country.

Remember when the talking heads on television told us that because of the tariffs President Trump had placed on China, the cost of imports would go up. Well, they misread the tea leaves again.

The Gateway Pundit posted the following from the Bureau of Labor Statistics:

U.S. Import prices fell 0.3 percent in May, the first monthly decline since a 1.4-percent drop in December. Import prices advanced 1.8 percent from December to April before the downturn in May. The price index for overall imports decreased 1.5 percent over the past 12 months, matching the drop in January. These were the largest over-the-year declines since the index fell 2.2 percent in August 2016.

Fuel Imports: Import fuel prices declined 1.0 percent in May, after rising 25.4 percent over the previous 4 months. Lower prices for both petroleum and natural gas contributed to the May decline. Petroleum prices fell 0.9 percent in May, after a 4.7-percent advance in April. The May decrease was the first monthly decline since a 15.3-percent drop in December. Natural gas prices fell 6.8 percent in May following a 51.1-percent decline the previous month. Overall fuel prices decreased 1.1 percent over the past year. The decline was driven by a 1.9-percent drop in petroleum prices which more than offset a 2.5-percent rise in natural gas prices.

The lower costs on fuel allowed the overall import costs to go down for the month.  This is in the face of tariffs the Trump Administration put on China as a result of inaction from the Chinese in coming together on a trade agreement with the US.

Despite what all the liberal naysayers said about increasing tariffs costing Americans millions, the costs of imports are actually down.

Overall the US economy is in very solid shape –

The experts seem to be having a very difficult time getting things right under the Trump administration.

Why you need to vote for a Republican President in November.