The American Thinker posted an article today about one network’s recent attempts to smear Florida Governor Ron DeSantis. Governor DeSantis is a current target because of his state’s relatively successful handing of the coronavirus. He is also viewed as a future candidate for higher office and thus must be destroyed before that happens. The article explains the smear attempt and then explains what actually happened.

…In addition to repeatedly and falsely implying that Florida handled COVID badly and is a hotbed of disease, the media are now attacking DeSantis directly.

Most recently, CBS’s 60 Minutes, openly accused DeSantis of a pay-to-play scheme with Publix, giving the latter the right to distribute vaccinations in exchange for a $100,000 campaign donation. You can see the set-up in the string of three tweets, below, which culminate in ostensible footage of an angry DeSantis baselessly swatting aside Sharyn Alfonsi’s challenging questions:

This is one of the tweets: 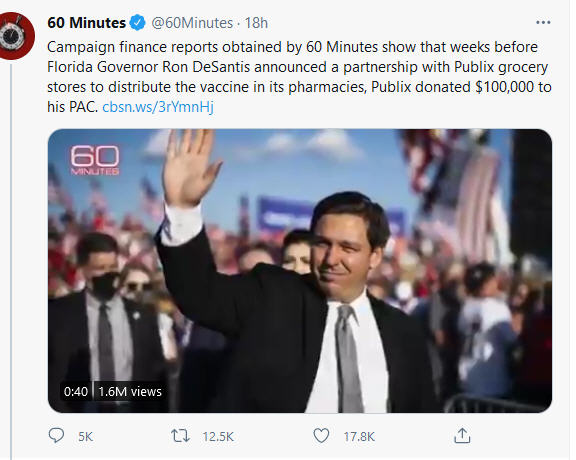 If that were the entire story, it would not be a good look. However, there is more to the story.

Well, it turns out that CBS forgot to include a few things when it put together that footage of a contentious exchange between the “brave” Alfonsi and the “evil” Republican governor. In fact, DeSantis carefully explained to the assembled media the decision-making behind choosing Publix to disburse vaccinations:

So, first of all, when we did, the first pharmacies that had it were CVS and Walgreens. And they had a long-term care mission. So they were going to the long term care facilities. They got vaccine in the middle of December, they started going to the long-term care facilities the third week of December to do LTCs. So that was their mission. That was very important. And we trusted them to do that. As we got into January, we wanted to expand the distribution points. So yes, you had the counties, you had some drive through sites, you had hospitals that were doing a lot, but we wanted to get it into communities more. So, we reached out to other retail pharmacies — Publix, Walmart — obviously CVS and Walgreens had to finish that mission. And we said, we’re going to use you as soon as you’re done with that. For the Publix, they were the first one to raise their hand, say they were ready to go. And you know what, we did it on a trial basis. I had three counties. I actually showed up that weekend and talked to seniors across four different Publix. How was the experience? Is this good? Should you think this is a way to go? And it was 100% positive. So, we expanded it, and then folks liked it. And I can tell you, if you look at a place like Palm Beach County, they were kind of struggling at first in terms of the senior numbers.

DeSantis explained too, that at a meeting with the Palm Beach County mayor, administration, and other “folks,” one of the things they calculated was “that 90% of their seniors live within a mile and a half a Publix.” The ultimate calculation, therefore, was what would be easiest for residents:

Please follow the link above to the article to read the rest of the story. As the mid-term elections approach, we can expect to see more character assassination directed at conservative candidates. Many Republican candidates will avoid this because they are part of the uni-party, but look for attacks (mostly baseless) on conservatives during the next year–particularly those who might run for President.

The coronavirus has turned the American economy and the lives of Americans upside down. The disease has become a political weapon to be used to pick winners and losers in the economy and to limit the freedoms of all Americans. Statistics that show that the death rate from the virus is about the same as a bad flu season have been suppressed. I am not saying that the virus is not serious–I have had it and I have lost friends to it–but I am saying that we have overreacted and not necessarily followed the most prudent course. Remember in February when we were only going to lock down for two weeks? Some governors have used the virus as an excuse to punish political enemies or to exercise authority never granted to them by the state or federal Constitution. Others have injected common sense into the equation.

Yesterday The Conservative Treehouse posted an article about how Florida Governor Ron DeSantis is handling the virus.

As many state and regional leaders crush their small business owners under the weight of insufferable and unscientific COVID-19 restrictions, Florida Governor Ron DeSantis goes in the exact opposition direction. Governor DeSantis highlights his concern about the economic and financial impact to businesses and workers in the state.

The Florida Governor holds a press conference at a local restaurant today promising that all small business owners, restaurants and bars in the state will remain open and free to conduct business. COVID-19 will be managed, but we will not destroy families with arbitrary rules and dictates holding no foundation in science. God Bless DeSantis !

Those at risk can self-quarantine. The rest of us don’t have to. We need to take the basic precautions that we would take during the flu season. We know more about the virus than we did last winter–we have some idea of how to treat it. We also have a vaccine that we can give to the vulnerable. It is time to get on with our lives.