On Saturday, The U.K. Daily Mail posted an article about some recent statistics about people crossing into America via the open southern border.

More illegal immigrants on a terror watch lift have been caught crossing the southern border so-far this year than during the last five years combined, figures reveal.

Since the fiscal year began in October, 50 migrants who appeared in the federal Terrorist Screening Dataset have been intercepted while trying to cross into the US between official checkpoints at the southern border, according to Customs and Border Patrol statistics. 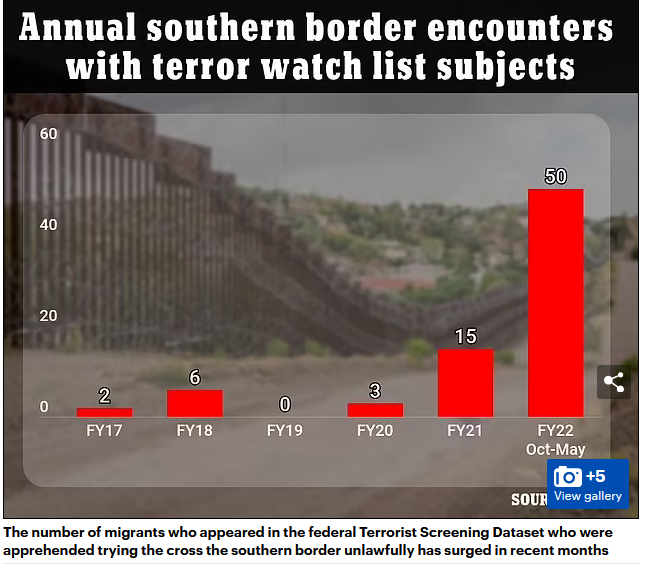 The subject of potential terror suspects using the southern land border to enter the US unlawfully has gained increasing attention in recent months.

CBP only resumed publishing its data on the subject last month, following pressure from Republican lawmakers.

These numbers not only need to be published, they need to be shouted from the rooftops by all Americans until Congress does something about our border security. If either party in Congress wanted to correct this situation, it would have been corrected by now. The Democrats want future voters and the Republican establishment wants cheap labor. Until we drain the swamp, we will not fix the border.

I don’t know anything about Florida Governor Rick Scott, but I love the way he handled this reporter. Watch the video (posted at YouTube). I don’t know that I could have been so patient::

There are a few facts here that are either unintentionally or intentionally misrepresented. First of all, the gunman did not use an AR-15. (Just for the record, even if he had an AR-15, an AR-15 fires one shot every time you pull the trigger–it is NOT an automatic weapon–it is just a scary-looking rifle.) He used a Sig Sauer MCX rifle. Similar, but again, not an automatic weapon. About the idea of taking guns away from people on the terrorist watch list or the no-fly list. Oddly enough, this is a really dangerous idea in relation to the U.S. Constitution. Both these lists (aside from their record of inaccuracy) are done without the person on them being aware of being on the list. The person placed on the list has to go through a lengthy process to get off of the list. This is an assumption of guilt and having to prove innocence. That is against the U.S. Constitution. In America we have the right to face our accusers, and we are considered innocent until proven guilty. Taking guns (or forbidding the purchase of guns) to a group of people who are not charged with any crime and have not been proven guilty is a really bad idea.

Just a note on the no-fly list–at one point Senator Ted Kennedy was delayed when flying home to Massachusetts from Washington, D.C. because somehow he (or someone with the same name) had been placed on the no-fly list. The no-fly list is not a list I have a lot of confidence in.

The Washington Examiner posted an article today about an investigation into why Boko Haram was not placed on the terrorist watch list during the time that Hillary Clinton was Secretary of State.

A conservative group is suing the State Department in an effort to find out whether the agency’s refusal to place Boko Haram on the terrorist watch list while Hillary Clinton was secretary of state had anything to do with the fact that a high-level Nigerian official was a major Clinton Foundation donor and close friend of the former president.

Citizens United, a conservative nonprofit, brought the case to court after the State Department ignored its request for records about the Chagoury Group, a sprawling Nigerian company headed by a Clinton friend and financial supporter of Clinton causes, Gilbert Chagoury.

Chagoury donated between $1 million and 5 million to the Clinton Foundation, donor records show.

More than 30 days have passed since Citizens United first filed the lawsuit without a response of any kind from the State Department.

Somehow, I think that when the truth about some of the donors to the Clinton Foundation during Hillary Clinton’s tenure as Secretary of State is known, the email server is going to be the least of Mrs. Clinton’s worries. There are so many ‘coincidences’ between donations to the Foundation and large speaking fees for President and Mrs. Clinton and actions taken by the State Department that it is obvious that they are not all coincidences.