The strategy of Greg Abbott and others to send illegal aliens to sanctuary cities around the country was a stroke of genius. Not that it was original: for at least the last five or six years, a friend has been emailing me to the effect that illegals should be sent to Marin County, Nancy Pelosi’s San Francisco mansion, and, above all, Martha’s Vineyard. That, he said, would bring the open border problem to a screeching halt.

And it may. Ron DeSantis’s master stroke of sending two planeloads of aliens to Martha’s Vineyard has made liberal heads explode. The irony is evident to everyone. These places are “sanctuaries” for illegal aliens, but if they actually see a few of them they panic. Their yards boast “All Are Welcome Here” signs, but it turns out that some are more welcome than others.

Rasmussen finds that most people approve of Governor Abbott’s shipping illegals to sanctuary cities like Chicago and Washington, D.C., by 52% to 36%. Those 36% are diehard Democrats who think it is fine for Texas to try to deal with one million aliens, but an outrage if a liberal city has to take on a few hundred.

Unlike most Americans, liberals don’t appreciate the irony. Their reaction has been priceless.

The meme below is posted at the bottom of the article: 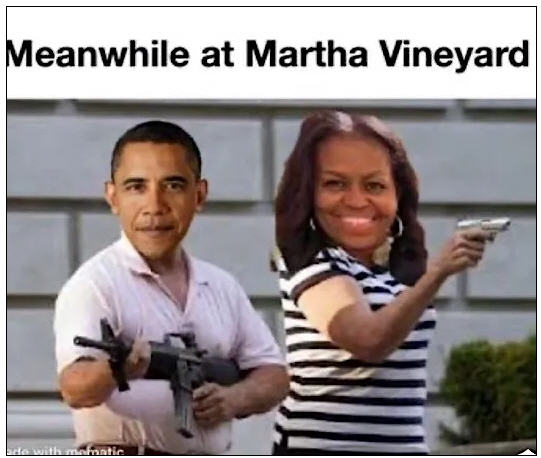 Members of the West Tisbury Select Board were told about the unexpected development during a Wednesday night meeting at which Town Administrator Jennifer Rand said she’d been receiving “furious texts” from residents, the MV Times reported.

I’ll bet they were furious! Not just anyone can live on Martha’s Vineyard. Maybe the Vineyard folks can ship the unwanted illegal aliens to a more downscale location, like the Hamptons. Or else the illegal immigrants, of whom there are only around 50, could all stay at Barack Obama’s $12 million estate. There is plenty of room there, and I understand his mansion has 10 bathrooms. That would be more than enough. But don’t hold your breath.

In all seriousness, if there is anything that could motivate Democrats to accept United States sovereignty, this is probably it.

UPDATE: I forgot to add that Governor Abbott also bused around 100 illegals to Kamala Harris’s Washington, D.C., residence, the Naval Observatory. This was in response to Harris’s absurd claim that the southern border is “secure.” No way, say the illegals themselves: the border is “open!” Let’s have more of this, until the Democrats say “Uncle.”

UPDATE: Will the Obamas come through for their illegal friends? Some are doubtful: