Breitbart is reporting today that the number of jobs added to the American economy in April was far below expectations.

The U.S. economy added just 266,000  jobs in April and the unemployment rate ticked up to 6.1 percent, the Labor Department said in its monthly labor assessment Friday, smashing expectations.

This was far below expectations. Analysts surveyed by Econoday had predicted Friday’s report would show between 755,000 and 1.25 million workers added to payrolls in April. The median forecast was for 938,000 and an unemployment rate of 5.8 percent.

The news is not all bad–it’s just not what the economists wanted. They were hoping that the Biden administration would continue the good news of the Trump administration. Based on the policies espoused by the Biden administration, that is a false hope. The unemployment rate in March was 6 percent, so unemployment only went up slightly (not down as predicted). There is, however, another figure that needs to be looked at–the workforce participation rate. The workforce participation rate is the section of working population in the age group of 16-64 in the economy currently employed or seeking employment. That number was 61.5 in March and 61.7 in April. Changes in that number occur gradually, and an upward trend is a good thing.

In April, 18.3 percent of workers performed their jobs remotely because of the coronavirus pandemic, down from 21.0 percent in the prior month.

The number of people saying they had been unable to work because their employer closed or lost business due to the pandemic declined to 9.2 million, from 11.4 million in the previous month. Among those who reported in April that they were unable to work because of pandemic-related closures or lost business, 9.3 percent received at least some pay from their employer for the hours not worked, little changed
from the previous month.

Among those not in the labor force in April, 2.8 million persons were prevented from looking for work due to the pandemic. This measure is down from 3.7 million the month before.

We are actually moving slowly in a good direction. The question is whether or not that positive economic momentum will continue under President Biden’s economic policies.

Yesterday The Washington Times posted an article about the Biden administration’s revised estimate of how many jobs the infrastructure bill would create. The numbers have changed dramatically.

The White House clarified Tuesday that one study projects that President Biden’s $2.25 trillion infrastructure package will create roughly 2.7 million jobs — not the 19 million jobs administration officials had touted over the weekend.

White House press secretary Jen Psaki cited a study from Moody’s that projects the U.S. economy will add 19 million jobs over the next decade if Congress passes Mr. Biden’s plan and about 16.3 million jobs if Congress doesn’t pass it.

“So that is what the impact would be of the American Jobs Plan — 2.7 million, to be totally clear,” Ms. Psaki said. “It is important to be clear and to be specific about jobs numbers — to provide clarity to the American people.”

Brian Deese, director of the National Economic Council, and Transportation Secretary Pete Buttigieg had both cited the study over the weekend to say the plan would create 19 million jobs.

Mr. Buttigieg clarified on CNN Monday that the Moody’s study projects an additional 2.7 million jobs in its forecast if the plan is passed.

I wonder how many Americans missed the ‘clarification’ and are still believing the original number given.

CNS News is reporting today that the economy is doing better than predicted.

A record 157,005,000 people were employed in June, the most since February and the 19th record of Trump’s presidency, the Bureau of Labor Statistics reported on Friday.

The unemployment rate, the lowest in 50 years, ticked up a tenth of a point to 3.7 percent.

In June, the nation’s civilian noninstitutionalized population, consisting of all people age 16 or older who were not in the military or an institution, reached 259,037,000. Of those, 162,981,000 participated in the labor force by either holding a job or actively seeking one.

The participation rate reached a record high of 67.3 percent in early 2000; the highest it’s been under Trump is 63.2 percent.

I love the fact that during a Republican administration, the estimates of jobs created is always low and economists are always surprised when the real numbers come out.

But Powell also mentioned “some ongoing cross-currents,” including trade uncertainty and incoming data about the strength of the global economy.

He said the Fed “will closely monitor the implications of incoming information for the economic outlook and will act as appropriate to sustain the expansion…” That could mean lower interest rates — or not, if the employment and job numbers remain strong.

Economic policies impact the economy. It matters who is occupying the White House. President Trump has proved that. 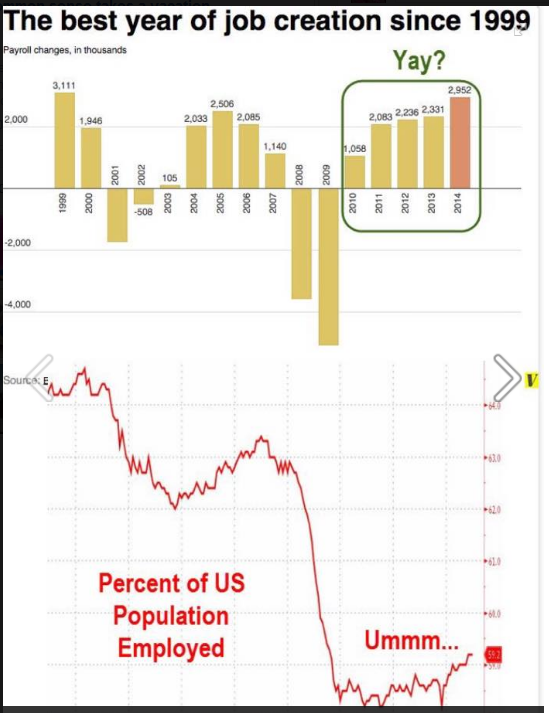