The biggest advantage the Republicans will have in 2020 is a strong economy. Because the Democrats know this, they are trying very hard to downplay the economic recovery that is currently taking place. They have invented some interesting facts in their attempt to do this. However, the alternative media has learned to fact check these attempts to downplay President Trump’s economic success.

The article reports on some recent statement by Kamala Harris:

First, I’m not sure many economists or Republicans cite the stock market as the top indicator of economic health, despite her initial straw man claim. There are many other metrics that are more indicative and more helpful to building that argument, which we’ll mention in a moment.  But it’s also worth pointing out that a robust stock market is not merely good news for people who own stocks, as Harris sarcastically says.  Plenty of workers’ benefit and retirement funds, including those of many public sector employees, are tied into the performance of the stock market — so it’s not just investors who benefit when markets are humming along, and it’s not just investors who feel pain when markets sustain hits.

Second, in her attempt to downplay the impressive, stable and low US unemployment rate, Harris recycles a claim for which AOC was slapped down by fact-checkers a few months ago.  Even left-leaning Politifact assigned her a “pants on fire” rating.  Harris’ spin is less explicitly clumsy and wrong than AOC’s, as she didn’t specifically state that the low rate is directly attributable to people working more than one job, which makes absolutely no sense — but she does use this argument to undercut the (compelling) argument that the economy is in good shape because so many Americans are employed.  While it’s certainly true that a substantial number of people are working multiple jobs in order to make ends meet, it’s not accurate to pretend that this phenomenon is sufficiently widespread as to justify Harris’ talking point.

The February jobs report found that just five percent of the employed population is working more than one job, down from 5.2 percent one year ago.  The experiences of the people who constitute that five percent matter, of course, but they are not evidence of a larger trend — and certainly not a trend that represents a real basis to shrug off the historically-low unemployment rate.  The jobs report that came out on Friday was a major ‘miss’ on a key number, with the US economy adding only 20,000 jobs last month; economists were expecting 180,000.  That’s a potentially concerning data point, underscoring the folly of simply assuming that the current prosperity streak will continue unabated.  But there were positive statistics, too.  The previous two months’ job creation data was revised upward by 12,000, and the overall unemployment rate fell to 3.8 percent.  That marks 12 consecutive months, a full year, with the U3 figure at or below four percent, which is unambiguously good.

Sustainability is a fair worry for the White House, but as of this moment, the most useful measuring sticks of the US economy are unemployment (3.8 percent), GDP growth (3.1 percent Q4 to Q4), and wage growth (3.4 percent).  All three are impressive.  Harris’ snarky point, therefore, is weak.

As wages and jobs increase, voters will have to decide whether to believe what they are experiencing or what they are being told.

The article lists several recent scandals. Here are a few:

A Chicago union leader takes a leave of absence in 1989 from the city’s sanitation department, where he earned $40,000, to work for a union. He is then allowed to “retire” from the city at age 56 with $108,000 pension. (The rules say that the individual should waive a union pension to do this. In this case, the official reportedly does not waive the union pension. The city knows this, but grants the city pension anyway.)

More than half the lifeguards working for Newport Beach, CA earn more than $150,000 in 2010. One earns $203,481. A lifeguard labor union spokesman comments: “We have negotiated very fair and very reasonable salaries. . . . Lifeguard salaries here are well within the norm of other city employees.”

There are many more examples listed in the article. This might be the reason many of our towns, cities and states are on the verge of bankruptcy.

The article reminds us of the relationship between union dues and political contributions:

The American Federation of Teachers (AFT) collects $211 million in dues in 2010; the National Education Association (NEA) $397 million. With state affiliates included, the total approaches $1 billion. The AFT president makes nearly half a million, and almost 600 officials at the two unions earn over $100,000. $297 million is donated to political campaigns over a decade—with total political spending much higher. It is hard to say how high the spending really is because members do not receive complete information.

…For the fifty states as a whole, unfunded public employee benefit liabilities are at least $1.26 trillion, according to the PEW Center on the states.

This information comes from a book entitled, Crony Capitalism in America 2008-2012, Chapter 19, Public Sector Union Scandals Begin to Leak by Hunter Lewis. The book is available at Amazon.com.

There might be a few clues in the above examples of union abuse of taxpayer money as to how America might begin to trim its state, local and federal budgets. 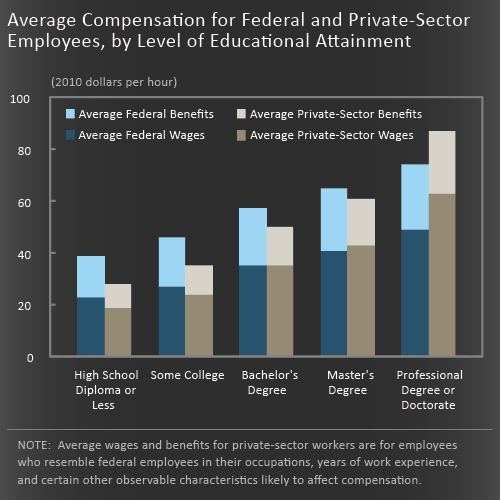 Although somewhat better than expected, the 175,000 net jobs created in May continues the historically tepid jobs growth trend that has come to characterize the now four-year-old economic recovery.

The result has been continued high unemployment, a vast pool of long-term jobless, and an unprecedented number of people who’ve dropped out of the labor force.

The article reminds us that there are 2.4 million fewer people working than there were in January 2008. The Democrats have attempted to blame the slow job growth on sequestration, but that doesn’t make sense. Sequestration did not go into effect until March, and sequestration cut the rate of growth–it did not cut the budget.

…the total number of government jobs climbed more than 7,000 since January (not including U.S. Postal Service jobs, which get included in government statistics even though the USPS is independently run).

It really is time to shrink the government. It is ridiculous that as the number of people leaving the workforce increase, the government continues to grow.

Breitbart.com posted an article today about the latest jobs report. The article points out that the dip in the unemployment rate was the result of over a half-million people dropping out of the workforce.

Over the last five months, 73% of all jobs created were government jobs. Moreover, the unemployment rate for government workers plunged to 3.8% in November — which is considered full employment.

Logically, when the civilian workforce is smaller, fewer people are paying taxes, and the money to fund the government shrinks.

Even though deficits rule the day at every level of government, according to the Bureau of Labor Statistics, of the 847,000 new jobs created since June, a full 621,000 were government jobs. In November alone, 35,000 new government jobs were created.

In other words, as the labor participation rate plummets to a thirty year low — which means we have fewer taxpayers — we’re not only increasing the number of taxpayer-funded jobs, but the government is using the creation of these jobs to juice the employment numbers in a way that makes it look as though the job situation is actually improving.

I would be very surprised to see any of these numbers reported in the mainstream media.

Yesterday The Blaze posted an example of how a story can be changed after it is posted on the Internet so it does not hurt the Obama Administration. The story in question was posted at CNN Money.

Later, after the revisions, the story stated:

The information has not changed–the slant has.

“The Bureau of Labor Statistics just released its first tally of jobs associated with producing green goods and services,” the story says (take these numbers with a grain of salt; the administration uses an extraordinarily loose definition for the term “green job“).

“The utilities industry — which includes nuclear and hydroelectric power generation — has the highest share of green jobs, at nearly 12 percent, while the construction industry comes in second at 6.8 percent. Some 5.3 percent of federal government jobs are green,” it adds.

In fact, as reported yesterday on The Blaze, the federal government has invested billions of taxpayer dollars in agency-related “green” energy initiatives.

Which brings us back to the original point: for the amount of money that has been poured into “green” energy, 2.4 percent of the nation’s workforce hardly seems like a fair return on investment.

The whole thing makes me want to see a real definition of a ‘green job.’