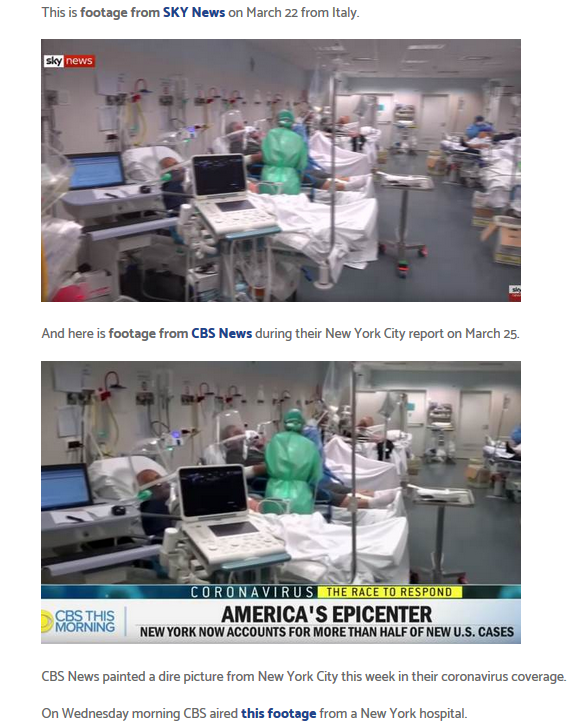 Showing this picture while discussing the coronavirus in New York City was both irresponsible and misleading.

Unfortunately there is a lot of fake news being reported in the mainstream media right now. Be careful who you believe.

Israel’s leading drug producer announced Thursday it will donate 6 million doses of anti-malaria drugs to the United States in hopes that it could be helpful treating coronavirus symptoms.

Teva Pharmaceutical Industries says the drug could potentially treat people with the coronavirus and will ship the hydroxychloroquine tablets through wholesalers nationwide by the end of the month and will provide 10 million doses in total, according to Breitbart News.

“We are committed to helping to supply as many tablets as possible as demand for this treatment accelerates at no cost,” Teva Executive Vice President Brendan O’Grady said about the move.

President Trump has expressed support and optimism for potential treatments, including malaria drugs chloroquine and hydroxychloroquine.

Yesterday The Gateway Pundit reported on the testing of the drugs:

Dr. Oz harped on the wonderful news on the chloroquine treatment for coronavirus.

Dr. Oz: There was actually pretty big news today. There was a paper that came out yesterday that was being discussed but didn’t get the attention that I thought it would that a paper from France that the use of an old drug, the malaria drug together with the Z-Pac seemed to dramatically impact on this virus. And that could be the biggest game changer of all that can alter if we can ever become Italy… But I’ll give you the biggest fact of all. In this study they shortened the amount of time the patients excreted the virus down to six days. The norm is approaching 20 days. That completely changes the behavior of the virus. Which means it may be actually more like a flu virus in its impact on us. It’s still dangerous but now as contagious… If drug that has already been on the market for 65 years could be effective in treating a new virus, yes there are potential side effects, there are eye problems that potentially arise, we know that we use these drugs commonly. But I think it’s worth the chance. And we should be doing the study starting today! And we’ll know in six days. In the meantime the task force is going to liberalize use of these medications.

Stay tuned. If this treatment is successful and we manage to keep everyone home for a week or two, we may come through this in relatively good shape.

Yesterday The Epoch Times posted an editorial giving their opinion on what to name the coronavirus. Their suggestion is a common-sense approach to placing responsibility where it belongs.

The Epoch Times suggests a more accurate name is the “CCP (Chinese Communist Party) virus,” and calls upon others to join us in adopting this name.

The name holds the CCP accountable for its wanton disregard of human life and consequent spawning of a pandemic that has put untold numbers in countries around the world at risk, while creating widespread fear and devastating the economies of nations trying to cope with this disease.

After all, CCP officials knew in early December that the virus had appeared in Wuhan, but they sat on the information for six weeks. They arrested those who tried to warn of the danger, accusing them of spreading “rumors,” and employed the regime’s rigorous censorship to prevent media coverage and to delete any mentions of it from social media.

What might have been contained was allowed silently to spread, showing up in all of China. Individuals who might have protected themselves became victims, in numbers far greater than the CCP has admitted. By late January, there were reports that all of the crematoria in Wuhan were operating 24 hours a day, seven days a week to deal with the crush of dead bodies.

The editorial notes the price of getting too cozy with dictatorships:

In any case, as questions about the origin of the virus have gone unanswered, the CCP has begun throwing out wild charges that the United States is responsible. This will be met around the world with perplexity, if not ridicule. President Donald Trump has pushed back by referring to the “Chinese virus.”

And this points out why the name “CCP virus” is needed, to distinguish the victims from the victimizer. The people of Wuhan and of China are the victims of the CCP’s arrogance and incompetence, expressed in this viral pandemic.

The name CCP virus also sounds a warning: Those nations and individuals close to the CCP are the ones suffering the worst effects from this virus, as is seen in the raging infections in the CCP’s close ally Iran and in Italy, the only G-7 nation to sign onto the Belt and Road Initiative. Taiwan and Hong Kong, which are highly skeptical of the CCP, have had relatively few infections.

Finally, the CCP virus reminds the people of the world that the source of the virus is itself evil. This is a communist virus, and with the name CCP virus, The Epoch Times reminds the world of the cure: ending the CCP.

Breitbart is reporting today that thanks to the immigration policies enacted by former Interior Minister Matteo Salvini, illegal migrant landings have been cut in half in 2019.

According to the ministry, the country saw 23,210 arrivals in 2018 which then reduced to 11,439 in 2019, although the number of arrivals has dramatically increased since Salvini and his League party left the government in August and were replaced by the leftist Democratic Party, Il Giornale reports.

Salvini, who closed Italian ports to migrant transport NGOs, is largely credited with dramatically reducing the number of drowning deaths in the Mediterranean sea.

The populist League leader slammed the leftist government coalition for the rise of new arrivals in recent months saying: “Even in December the landings increased compared to the same period a year ago.”

Since the new government took over, the number of migrants has increased.

According to Il Giornale, the number of new migrants has increased since the new coalition took power in September, compared to the same period last year and claimed that the current government was taking credit for policies enacted by Salvini, rather than their own record.

The policies of Salvini remain popular in Italy, with the League topping opinion polls for months and Salvini himself consistently being voted the most trusted politician in the country, ahead of current Prime Minister Giuseppe Conte.

The coalition of the Five Star Movement and the Democratic Party, however, remains unpopular with the vast majority of the Italian public with some polls showing Salvini’s League with nearly as much support as both parties combined.

Cracks in the government coalition have also begun to emerge in recent weeks, with three Five Star Movement senators defecting to the League earlier this month.

Stay tuned. Around the world, average citizens of any country do not want to see their country inundated by illegal immigrants who have no intention of assimilation or contributing to the culture of the country they are entering. It is disheartening to see pictures of young men pouring into foreign countries rather than working to improve conditions in their own countries.

CBN News is reporting today that Meriam Ibrahim has left Sudan and is currently in Italy. Mrs. Ibrahim was in prison in Sudan because she had married a Christian and was a Christian. Her father, who was not involved in her childhood, claimed that she was a Muslim and had converted to Christianity. In Sudan, that is a crime punishable by death. She was pregnant when she went to prison and was forced to give birth while in chains. She was freed because of international pressure on Sudan. Her husband is an American citizen.

Her release comes just one day after a congressional hearing about her plight, where religious rights advocates warned that her case is just one of many.

“She is the tip of the iceberg,” Zuhdi Jasser, vice-chairman of the US Commission on International Religious Freedom, testified before the House Foreign Affairs Subcommittee.

“For every one case of Meriam Ibrahim, there are hundreds, if not thousands of those Sudanese and others who are victims of a draconian implementation of Sharia law that creates an existence for the Sudanese under the leadership of President Bashir that is really an abomination of religious freedom,” he charged.

“The United States needs to show more concern about religious hostility and persecution abroad, in particular the case with Meriam Ibrahim, where I think the response of the United States has been woefully inadequate,” Perkins told lawmakers.

I have been doing an awful lot of posts about Syria lately, but that is the issue of the day. There will be more to come today, but here is something else to add to the mix.

Gates of Vienna posted a video (and transcript) of an interview of one of two former hostages of the Syrian rebel forces. The video below can also be found on YouTube:

The transcript below can be found at the Gates of Vienna website: