On Monday, Newsbusters posted an article about the media reporting after a tragedy involving a gun.

In the aftermath of the tragic shooting in Boulder, the Big Three (ABC, CBS, NBC) network evening and morning shows sinisterly depicted Republicans, conservatives and gun owners as a “wall of opposition” and “resistance” to “common sense” gun control measures that would save lives.

In just four days (March 23 through March 26) of coverage, the networks filled their morning show and evening programs with statements favoring gun control over gun rights by a ratio of roughly 14 to 1.

It’s become commonplace for the networks to quickly seize on a mass shooting to champion the Left’s longstanding anti-gun agenda. After the December 2012 killings in a Newtown, Connecticut, elementary school, NewsBusters found the networks slanted their coverage 8-to-1 in favor of the gun control agenda.

In the wake of the 2016 mass shooting in an Orlando nightclub, the spin was an equally-lopsided 8-to-1. TV coverage of the killings in Las Vegas in 2017 was slanted five-to-one against gun rights, while in the wake of the February 2018 shootings at Parkland High School the networks tilted 11-to-1 in favor of anti-gun activists.

And after the 2019 shootings in El Paso, Texas, the networks tilted an even more lopsided 17-to-1 to the Left.

The article summarizes the numbers:

MRC analysts reviewed all statements that took a position on overall gun policy by anchors, reporters, guests and soundbites, beginning with the morning of March 23 (the morning after the Boulder shooting) through the morning of March 26, and found time spent arguing in favor of more gun control (36 minutes, 11 seconds) overwhelmed time devoted to supporting gun rights (2 minutes and 31 seconds.)

How are Americans supposed to get a fair picture of any issue when our media is so lopsided? This is ridiculous.

None of the laws currently proposed by Democrats in Congress to ‘save lives’ would have been relevant in most of the shootings that have occurred in America in recent years. Limiting the rights of law-abiding gun owners does nothing to prevent criminals from obtaining guns and using them. Has it occurred to anyone in Congress that criminals do not follow laws?

Yesterday The Epoch Times posted an editorial giving their opinion on what to name the coronavirus. Their suggestion is a common-sense approach to placing responsibility where it belongs.

The Epoch Times suggests a more accurate name is the “CCP (Chinese Communist Party) virus,” and calls upon others to join us in adopting this name.

The name holds the CCP accountable for its wanton disregard of human life and consequent spawning of a pandemic that has put untold numbers in countries around the world at risk, while creating widespread fear and devastating the economies of nations trying to cope with this disease.

After all, CCP officials knew in early December that the virus had appeared in Wuhan, but they sat on the information for six weeks. They arrested those who tried to warn of the danger, accusing them of spreading “rumors,” and employed the regime’s rigorous censorship to prevent media coverage and to delete any mentions of it from social media.

What might have been contained was allowed silently to spread, showing up in all of China. Individuals who might have protected themselves became victims, in numbers far greater than the CCP has admitted. By late January, there were reports that all of the crematoria in Wuhan were operating 24 hours a day, seven days a week to deal with the crush of dead bodies.

The editorial notes the price of getting too cozy with dictatorships:

In any case, as questions about the origin of the virus have gone unanswered, the CCP has begun throwing out wild charges that the United States is responsible. This will be met around the world with perplexity, if not ridicule. President Donald Trump has pushed back by referring to the “Chinese virus.”

And this points out why the name “CCP virus” is needed, to distinguish the victims from the victimizer. The people of Wuhan and of China are the victims of the CCP’s arrogance and incompetence, expressed in this viral pandemic.

The name CCP virus also sounds a warning: Those nations and individuals close to the CCP are the ones suffering the worst effects from this virus, as is seen in the raging infections in the CCP’s close ally Iran and in Italy, the only G-7 nation to sign onto the Belt and Road Initiative. Taiwan and Hong Kong, which are highly skeptical of the CCP, have had relatively few infections.

Finally, the CCP virus reminds the people of the world that the source of the virus is itself evil. This is a communist virus, and with the name CCP virus, The Epoch Times reminds the world of the cure: ending the CCP.

On Monday, Hot Air posted an article about media coverage of President Trump. Those of us who thought that according to the media President Trump could do nothing right have been proven correct. 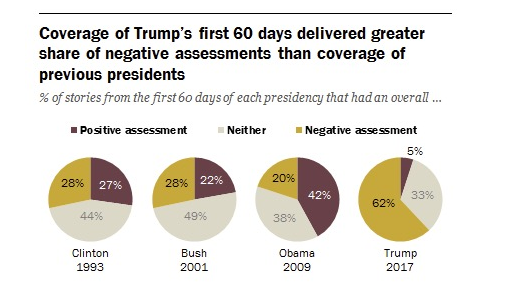 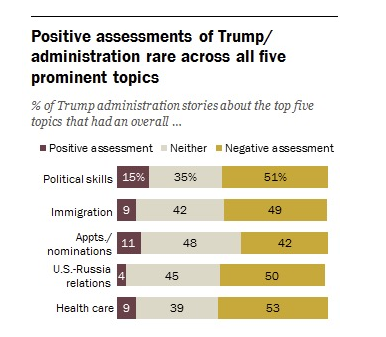 Aside from being unfair, this is not good for Americans. This is divisive and accomplishes nothing.

The obvious counterpoint is that Trump’s first 60 days had an unusual amount of bad news in them so of course the coverage would be negative to match. He rolled out the travel ban in late January without much of a heads up to John Kelly or James Mattis; he watched the House GOP introduce a fantastically unpopular health-care bill and fail to pass it; his national security advisor resigned over discussions he’d had with the Russian ambassador about sanctions; and Trump himself did what Trump tends to do, popping off on Twitter about Obama wiretapping his phones, assuring congressional leaders that he actually won the popular vote, and so on.

Still, the first 60 days were also when Trump delivered his well-received address to Congress, and it was a period in which various well-regarded cabinet members were nominated and/or confirmed. He nominated the eminently qualified and amiable Neil Gorsuch to the Supreme Court just 10 days into his term. Still: 5/62 on the coverage. Even allowing for the fact that there’s more overtly partisan media now than there was when Obama took office, let alone Bush or Clinton, some of the media outlets and programs tracked by Pew for this survey include *overwhelmingly* pro-Trump entities like Breitbart, Sean Hannity, Rush Limbaugh, and Tucker Carlson. Exclude them from the data and what’s the split on positive and negative coverage overall? 1/62? 0/62?

As the mainstream media becomes more irrelevant because of alternative news sources, they are jockeying for a place in the new news paradigm. Today’s reporters live in a politically left vacuum where facts are irrelevant. When today’s liberals are confronted with facts, they either change the subject or personally attack. It is my belief that the anti-Trump bias we are seeing in the mainstream media is the result of the fact that the 60’s hippies became college professors and chose to indoctrinate their students rather than teach them to think. That may be why the average liberal reacts the way he/she does when confronted with facts.