On Saturday, Sharyl Attkisson posted an article about the number of Covid-19 cases among military veterans who have been vaccinated.

In response to these accounts, Johnson submitted a letter to Department of Veterans Affairs (VA) Secretary Denis McDonough stating the following:

On May 27, 2022, I met with a group of Department of Veterans Affairs (VA) employees regarding their concerns with the quality of care received by veterans. These health care professionals described the significant workforce shortages at the VA facilities in Wisconsin and Michigan and that the vaccine mandate is only exacerbating these shortages. The VA owes the public and our veterans answers about the steps the Department is taking to address the workforce issues and to provide the highest quality care to the finest among us.”

The continuation of care for our veterans should be our top priority, not politically motivated policies like vaccine mandates.”

I think it’s time to reevaluate the effectiveness of the Covid-19 vaccine.

Yesterday Just the News posted an article detailing the history of Hunter Biden’s laptop and how it became public knowledge. It’s a rather lengthy article, so I suggest you follow the link to read the entire article. There were a few things that stood out to me as I read the article.

The family of the Delaware shop owner who says he came into possession of a laptop purportedly belonging to Hunter Biden first tried to turn over the computer to the FBI in summer 2019 but was rebuffed, only to have agents return months later during President Trump’s impeachment proceedings, his lawyer said Thursday night.

The article notes the timeline:

The article details some of the difficulties with getting law enforcement to pay attention to the laptop:

“Out of an abundance of caution, John Paul made a copy of the drive in case he was ever thrown under the bus as a result of what he knew. As John Paul watched the impeachment trial, he wondered why there was no reference to the information he had provided to the FBI. As a result, starting in February of 2020 and until July of 2020, John Paul reached out to several members of Congress to notify them of what he had in his possession. His requests fell on deaf ears.

On September 24, 2020, John Paul then submitted information about the drive to Senator Ron Johnson through the whistleblower link on Senator Johnson’s website. After that submission and while Giuliani’s office was still trying to verify the information, Senator Johnson released the Senate report on the Biden business dealings.”

“… The problem is not that John Paul turned over the information to those he believed he could trust, it is that politics today seems to revel in sensation and ignores the collateral damage left in its wake. Not only are our elected officials seemingly happy to obfuscate the facts in order to attack their opponents, they are also perfectly willing to throw everyday Americans under the bus for their own political gain.”

…”Instead of reporting on the matter, news outlets are making the decision themselves as to the veracity of the claims about Hunter Biden’s laptop. If you are an avid follower of CNN or Politico, you have already been led to believe that John Paul is a part of an overall Russian disinformation campaign.

“Twitter and Facebook have taken it upon themselves to relegate this story to a level equal to that of conspiracy theories. The actions by these social media platforms further hurt John Paul’s reputation by advancing the notion that he is a part of a Russian disinformation campaign.”

If you depend on the mainstream media for your news, a lot of this information is new to you. That is not good for the health of our representative republic.

The Epoch Times is reporting the following today:

Johnson, in a letter to Wray over the weekend, said a whistleblower contacted his committee on Sept. 24 about the laptop that was left at his business, saying he turned it over to the FBI. Johnson said that staff immediately asked if the agency can either confirm or deny details to validate the claim, but he said that the FBI wouldn’t confirm or deny the information that was found on the device.

“I have a responsibility to validate and verify the contents of any information produced to my committee,” Johnson said in his letter. “The committee must know if it receives information that could be fraudulent or not accurate.”

He mentioned that the information could be related to a foreign election interference campaign, saying that if that is the case, a defensive briefing is necessary. Johnson added that if the whistleblower provided false information, it could be a crime.

…“For these reasons, the committee must know whether the FBI has assessed the validity of materials the whistleblower has provided, and what, if any, actions the FBI has taken since obtaining this information,” Johnson said in the letter.

He also included a series of questions that the FBI should answer about the laptop, including whether the agency has material from the device, how they acquired it if they did indeed obtain the laptop, if the records on the hard drive have been altered or are genuine, whether the records were authored by Hunter Biden, or if the laptop was hacked in some way.

Unfortunately, Hunter Biden’s behavior is generally consistent with what was found on the laptop. He was discharged from the Navy for drug use, and he fathered a child with a stripper. However, we need to remember that the details of what is on the laptop matter. If Hunter was involved in selling access to his father, is his father also implicated? I don’t know. If the accusations about the money flowing to Hunter Biden from China and going to Joe Biden are true, it is an entirely different story. It will be interesting to see exactly what the FBI says about the information.

The Gateway Pundit posted an article yesterday about the number of leaks coming out of Washington during the first 126 days of the Trump Administration.

Senator Ron Johnson (R-WI), Chairman of the US Senate Committee on Homeland Security and Governmental Affairs, examined media leaks between January 20, 2017, and May 25, 2017 — the first 126 days of President Trump’s administration. 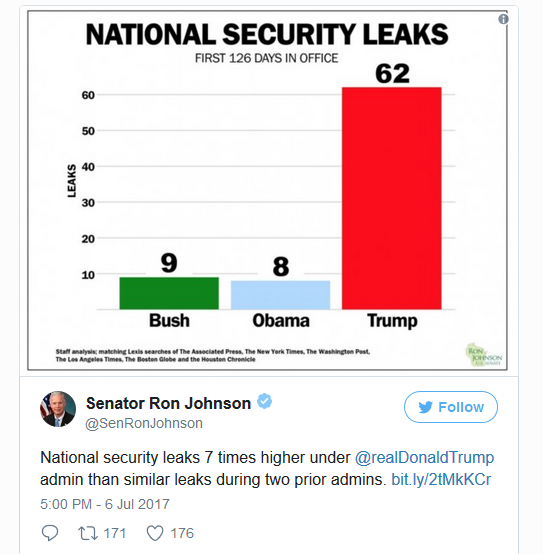 A couple observations not in Senator Johnson’s report are that many of the leaks are related to James Comey in one way or another and the former FBI Director has admitted leaking information to the press.  Another observation is that a significant amount of the so called leaks have been proven false at later dates.  This makes you wonder if they are just being made up by someone like John Podesta.

Regardless of who is creating them, leaking them or reporting them, the criminal leaks are damaging to the US Intelligence community and are clear attacks against President Trump.

Our government officials should not be working to undermine an elected President. There needs to be some action taken against the guilty parties.