The Washington Times posted an article today about the Farm Bill that was recently passed. The House of Representatives added a more stringent work requirement to the Food Stamps Program, but the Senate eliminated the requirement. Thus the Farm Bill as it currently stands puts a 20-hour-per-week work requirement only on people between the ages of 18 and 49 who receive food stamps.

President Trump moved Thursday to tighten work requirements for people who receive food stamps, after Congress failed to include the proposal in a $400 billion farm bill that’s headed to the president’s desk.

The Agriculture Department said it is proposing a rule on Mr. Trump’s orders that would move “more able-bodied recipients” of food stamps back into working at least 20 hours per week.

“Long-term reliance on government assistance has never been part of the American dream,” said Agriculture Secretary Sonny Perdue. “As we make benefits available to those who truly need them, we must also encourage participants to take proactive steps toward self-sufficiency. Moving people to work is common-sense policy, particularly at a time when the unemployment rate is at a generational low.”

…Currently, able-bodied adults ages 18-49 without children are required to work 20 hours a week to keep their food-stamp benefits. The House measure would have raised the age of recipients subject to work requirements from 49 to 59 and required parents with children older than 6 to work or participate in job training.

The Labor Force Participation Rate currently stands at 52.9 percent. The Unemployment Rate currently stands at 3.7 percent. Wages at all levels have risen under President Trump. Inflation for 2018 is slightly over 2 percent. There is no reason anyone collecting food stamps cannot find a place to work for 20 hours a week or enter a job-training program that will help them find a job that pays enough for them to get off of food stamps. The Agriculture Department is doing the right thing in looking into strengthening the work requirements to collect food stamps.

In 1996 The Personal Responsibility and Work Opportunity Reconciliation Act was passed, giving states control of welfare.

Building on policies that had been passed by Reagan, and a foundational principle of “personal responsibility,” TANF added work requirements for aid, shrinking the number of adults who could qualify for benefits. This legislation also created caps for how long and how much aid a person could receive, and well as instituting harsher punishments for recipients who did not comply with the requirements.

Investor’s Business Daily posted an editorial yesterday about the recently passed farm bill. The article notes that there was bi-partisan support for the farm bill.

How bad is the bill? Even Iowa Republican Sen. Charles E. Grassley, himself a farmer, was outraged because the package granted federal subsidies even to distant relatives of farmers that don’t farm.

…Scott Faber of the Environmental Working Group, a left-leaning environmentalist organization that has been critical of farm subsidies, notes that more than 1,000 “city slickers” who live in major American cities get farm subsidies. It’s absurd.

All in all, the nearly $1 trillion a year spent on farm subsidies and food aid is a massive waste, given that farmers on average have higher incomes than those who are taxed to subsidize them

As Chris Edwards of the Cato Institute points out, farm incomes in 2017 were 32% higher than average U.S. household incomes, while about 60% of subsidies for the three main farm programs went to the biggest 10% of farms. Welfare for the rich.

Meanwhile, the the new bill also provides “promotional funds” for farmers markets, research for organic farming, and money to train more farmers. It also grants more money to veteran and minority farmers. Everyone gets a handout, it seems, whether needed or not.

In our increasingly socialized farm economy, nearly everyone is too big to fail. Which means the rest of us pay for it. President Trump, focused on other things, will likely sign this awful Farm Bill. After all, it has that golden seal of congressional approval: It was “bipartisan.” All that means is both sides found ways to rip off taxpayers.

The bill did not include work requirements for food stamps recipients. The Republican Congress had one job regarding the farm bill…

On Sunday Hot Air posted an article about the Farm Bill currently under consideration in Congress. The article included the following graph: 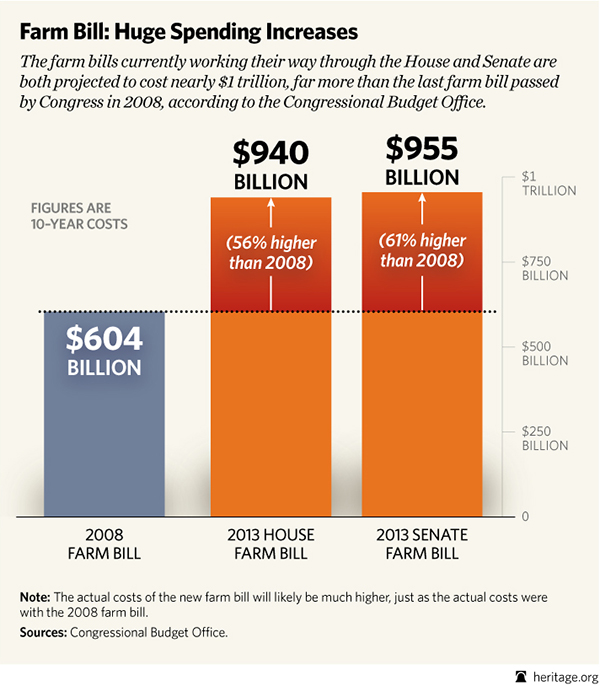 We need some people in Congress who can do math and are willing to cut spending–not just play games with the numbers.