On Sunday, Law Enforcement Today posted an article about the recent riots in Portland.

On Friday, the Department of Justice (DOJ) reported that 18 people were arrested and are facing federal charges for their roles in several weeknight protests at the Mark O. Hatfield U.S. Courthouse in Portland.

Police also said that protesters threw harmful items including incendiaries at the federal officers who came outside to protect the federal building and attempt to disperse the violent crowd. By 1 a.m., more protesters had returned back to the fence and continued to set fires, breached the fence, and threw commercial-grade fireworks towards the federal courthouse.

The article lists the charges:

According to a news release from the DOJ, the charges include assaulting federal police officers, arson, and damaging government property. Since May 26th, Portland has seen nightly protests that have been followed by violent and criminal activity. The Hatfield Federal Courthouse has been a nightly target of vandalism and from that has sustained extensive damage.

The article notes that all the defendants charged are believed to be local residents.

Attacking a federal building is a crime. Those charged deserve fair trials, but if they are found guilty, they need to spend some time in jail. Hopefully their arrest will remind those participating in the riots that they also might be arrested.

The Washington Post accused President Trump of lying when he stated that “the most dangerous cities are run by democrats.”  The Conservative Treehouse posted a graph yesterday the shows that the President’s statement was pretty accurate.

Here is the graph: 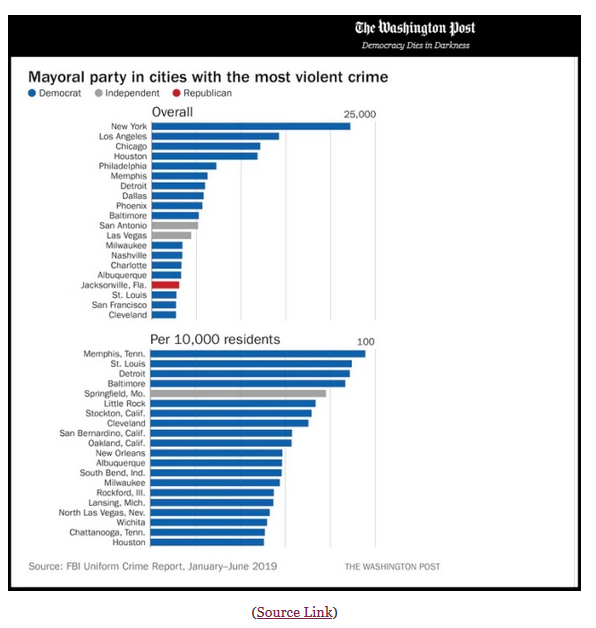 A republican mayor was elected to Jacksonville in the last election; therefore the Washington Post has declared that President Trump’s claim: “the most dangerous cities are run by democrats”, is false. There is a top-crime city now run by a republican.

This level of FAIL is so ridiculous, it presents itself almost as if the Washington Post intentionally trying to beclown themselves.

In 1994 Rudy Giuliani became Mayor of New York City. Mayor Giuliani instituted what was referred to as ‘The Broken Windows Theory.”

The origin of Broken Windows Theory can be traced back to a psychologist from Stanford, Connecticut, named Philip Zimbardo. He had set up a social experiment to test the theory in 1969. Zimbardo parked an old car in the Bronx, and another one of similar condition parked in Palo Alto, Califiornia. The car in the Bronx was vandalized almost immediately with all items of importance stolen. The other car in Palo Alto was left undisturbed for more than a week before Zimbardo himself went and smashed its windows. Within hours, other people came and vandalized the car as well. The hypothesis is that a community such as the Bronx, where city services may not have the resources to encourage the upkeep of its facilities, would be more apathetic than an upscale area like Palo Alto. This theory was later stated in an article in 1982 by James Wilson and George Kelling who stated that criminal activities in a community begin as small misdemeanors and gradually grow to become capital offenses. The authors also stated that the best way of dealing with crime was dealing with it in its infancy through making neighborhoods free of social ills such as prostitution, drug abuse, and other disorderly tendencies.

In the 1980s and 70s, New York City had seen an upsurge in criminal activity and the city’s municipal council was desperately seeking solutions to the menace that was tarnishing its reputation. The city’s Transit Authority then hired the author of the “Broken Windows” article, Mr. George Kelling as a consultant who then suggested the implementation of the theory. The Transit Authority’s leader, David Gunn implemented the approach by first clearing all graffiti from the city’s subway system which was conducted during his final term from 1984 to 1990. Kelling’s successor, William J. Bratton continued with the implementation of the theory through non-tolerance of fare-dodging as well as reducing leniency during arrests for petty offences. In 1993, New York City Mayor Rudy Giuliani hired Bratton as the police commissioner, and this gave Bratton a wider scope to implement the broken windows theory and was noted for arrests over public urination, public drinking, and other misdemeanors. Several studies in the past have linked the significant decline in criminal activities in the past decade to Bratton’s implementation of the “broken windows” theory. The impressive results of New York City’s implementation of the theory have made several other US cities implement the theory including Boston, Albuquerque, and Lowell.

Law and order makes a difference. When people understand that there are consequences for breaking the law, they tend to respect the law. When Mayors do not enforce the law, things will eventually become unruly. For whatever reason, Republicans seem to be more inclined to support the police and enforce the law than Democrats. The statistics posted by The Washington Post bear that out.

Yesterday The Star-Telegram in Fort Worth reported the following:

A Fort Worth woman recently indicted on voter fraud charges paid others involved in the scheme with funds provided by a former Tarrant County Democratic Party leader, court documents filed this week say.

After learning about a state investigation, Leticia Sanchez — one of four women arrested and indicted on voter fraud charges — allegedly directed her daughter to send a text message to others in the scheme, urging them not to cooperate with investigators, state officials say.

The allegations are made in the state’s notice of intent to introduce evidence in Sanchez’s criminal case, where state officials say she was among those who collaborated to vote for certain down-ballot candidates with a number of north side residents’ mail-in ballots.

The notice, filed Tuesday, states that Sanchez engaged in organized criminal activity in collaboration with her three co-defendants; Stuart Clegg, a former executive director for the Tarrant County Democratic Party; and others.

Earlier this month, four women were arrested — Sanchez, her daughter, Leticia Sanchez Tepichin, and Rosa Solis and Laura Parra — after being indicted on more than two dozen felony counts of voter fraud.

Officials allege the women were paid to target older voters on the city’s north side “in a scheme to generate a large number of mail ballots and then harvest those ballots for specific candidates in 2016.”

The notice did not specify which candidates the suspects were allegedly paid to support, but it noted that Sanchez and others marked down-ballot candidates “without the voter’s knowledge or consent.”

AG officials have said these charges “are in connection with the 2016 Democratic primary, but the case has connections with the 2015 city council election.”

AG spokesman Jeff Hillery declined to comment when asked if any other charges would be filed.

This development comes as early voting for the Nov. 6 midterm election is underway. Voters may vote early through Nov. 2. Election Day is Nov. 6.

The article suggests that the arrest and indictment of Ms. Sanchez may be a political move because it occurred right before the election, but it seems to me that the time to find and deal with voter fraud issues is before the election. People need to know that there are consequences for committing voter fraud.

A report from The Star-Telegram today warns voters to check the voting machines carefully before recording their votes.

This advice comes as state election officials receive complaints across the state from early voters casting straight tickets on Hart eSlate machines who believe the machines changed their votes.

Two complaints, reported through a third party, have been made in Tarrant County, said Heider Garcia, elections administrator.

“We have … tested everything,” he said. “We don’t have any indication that there’s a technical issue.”

The Texas Secretary of State’s Office has issued a statement about the issue.

The article cites one example:

Evelyn Brown, a 63-year-old longtime Fort Worth voter, said she had a problem voting this week.

She had gone to the Southwest Community Center on Welch Avenue and had cast a straight party ticket.

When she reviewed the summary, she saw that her choice in the U.S. Senate race — which pits Republican U.S. Sen. Ted Cruz against Democratic challenger U.S. Rep. Beto O’Rourke — had flipped to the candidate in the other party.

She spent seven or eight minutes trying to move back to change the candidate in that race, but wasn’t successful.

“I’m accustomed to using the booth,” she said. “I used the keys that let you move forward and back. It didn’t move at all. It was stuck.”

So she called the election judge over who ended up calling the Tarrant County Elections Office.

In the end, the election judge had to at least temporarily put that machine out of service. He moved Brown to a different machine, where she said she was able to cast a vote for all the candidates of her choice.

Vote carefully, Your country depends on it.

Yesterday the Washington Times reported that the Internal Revenue Service‘s Inspector General is conducting a criminal investigation into the disappearance of Lois Lerner’s emails.

Investigators have already scoured 744 backup tapes and gleaned 32,774 unique emails, but just two weeks ago they found an additional 424 tapes that could contain even more Lerner emails, Deputy Inspector General Timothy P. Camus told the House Oversight Committee in a rare late-night hearing meant to look into the status of the investigation.

Unfortunately, the Inspector General is still having problems getting the information he needs to pursue the case.

Rep. Gerald Connolly, Virginia Democrat, said Mr. George is refusing to turn documents over to him, prompting a heated reply.

“Oh really? We’ll see about that, won’t we,” Mr. Connolly replied, saying that he questioned whether Mr. George could be trusted if he’s refusing to provide documents, yet is in charge of an investigation into whether the IRS stonewalled document requests.

The hearing was the latest chapter in the complex investigation into the IRS’s targeting of tea party groups for special scrutiny.

Several congressional committees are still probing the matter, and both the inspector general and the Justice Department are conducting criminal investigations.

I wouldn’t hold my breath for the results of the Justice Department investigation.