On Sunday, Law Enforcement Today posted an article about the recent riots in Portland.

On Friday, the Department of Justice (DOJ) reported that 18 people were arrested and are facing federal charges for their roles in several weeknight protests at the Mark O. Hatfield U.S. Courthouse in Portland.

Police also said that protesters threw harmful items including incendiaries at the federal officers who came outside to protect the federal building and attempt to disperse the violent crowd. By 1 a.m., more protesters had returned back to the fence and continued to set fires, breached the fence, and threw commercial-grade fireworks towards the federal courthouse.

The article lists the charges:

According to a news release from the DOJ, the charges include assaulting federal police officers, arson, and damaging government property. Since May 26th, Portland has seen nightly protests that have been followed by violent and criminal activity. The Hatfield Federal Courthouse has been a nightly target of vandalism and from that has sustained extensive damage.

The article notes that all the defendants charged are believed to be local residents.

Attacking a federal building is a crime. Those charged deserve fair trials, but if they are found guilty, they need to spend some time in jail. Hopefully their arrest will remind those participating in the riots that they also might be arrested.

Philip Haney was well known in intelligence circles. He was an honest man who told the truth and blew the whistle on some of the ‘questionable’ practices of the Obama administration. He was well respected and totally honest in his assessments of terrorist threats. He was murdered in California earlier this week.

We have a quick update for the story we broke earlier today in the apparent murder of our friend, Philip Haney. We will continue to provide details as they become available.

While we and The Gateway Pundit are the only outlets covering this developing news, conversation on Twitter is exploding.

LET broke this tragic news to the nation this morning.

A screen shot taken from Frank Andrew Bostom’s Twitter feed shows what appears to be a statement from Frank Gaffney, the Executive Chairman of the Center for Security Policy.

“As you may know, we lost this week one of our most brilliant, most dedicated and most devout comrades-in-arms: Philip Haney.

While the details are sketchy at the moment, Phil went missing on Wednesday in the area he called home in northern California to which he returned after the passing of his beloved wife, Francesca, following a long struggle with a series of terrible health afflictions. On Friday morning, a sheriff’s deputy finally found his body with a gunshot wound to the chest.

As of now, we have no word about suspects or motives.

The article includes a screenshot of a tweet by Andrew Bostom: 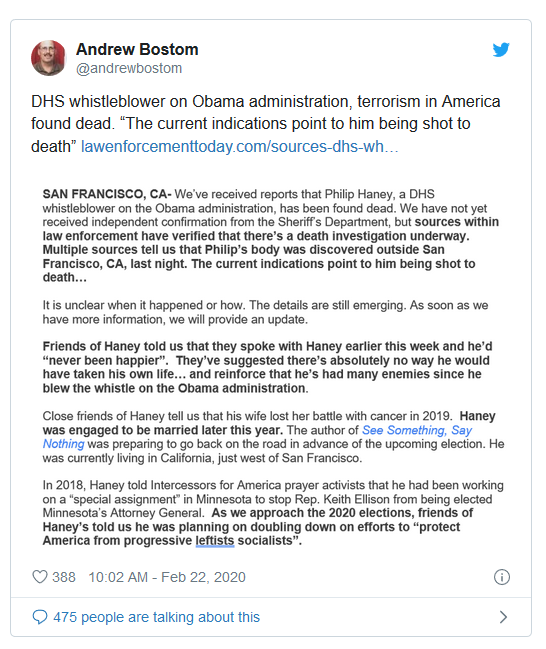 I never met Philip Haney, but I am familiar with his work. He was a dedicated patriot. He will be missed. Hopefully those responsible for his death will be found quickly and arrested.