CBS News is reporting today that Oregon is the first state to decriminalize the possession of small amounts of street drugs such as cocaine, heroin and methamphetamine.

The Oregon drug initiative will allow people arrested with small amounts of hard drugs to avoid going to trial, and possible jail time, by paying a $100 fine and attending an addiction recovery program. The treatment centers will be funded by revenues from legalized marijuana, which was approved in Oregon several years ago.

“Today’s victory is a landmark declaration that the time has come to stop criminalizing people for drug use,” said Kassandra Frederique, executive director of the Drug Policy Alliance, which backed the measure.

…Voters in New Jersey and Arizona approved measures legalizing marijuana for adults age 21 and older. In New Jersey, the Legislature now will have to pass another measure setting up the new marijuana marketplace. The Arizona measure also allows people convicted of certain marijuana crimes to seek expungement of their records. The passage of the measure signaled a change of attitudes, after Arizona voters narrowly defeated a legal pot proposal in 2016.

I am not in favor of the legalization of marijuana. There are no guarantees that legal marijuana will be limited to those over 21–how many people under the age of 21 smoke cigarettes illegally? I am not convinced we understand the effect of marijuana on the brain of people under the age of 25. Legalizing marijuana does not improve our society–it simply reduces the productive impact of one sector of that society. Marijuana and other drugs have never been a positive force in any society.

Mexican drug smugglers are really getting bold. A cross-border tunnel recently discovered by U.S. authorities exits in a San Diego warehouse right next to a busy Customs and Border Protection (CBP) port of entry. It gets better. The southern California warehouse is manned by Illegal immigrants even though it is situated just a few hundred yards from a hectic border crossing staffed with federal agents around the clock.

A Mexican national with legal residency has been arrested and charged in connection to the operation, federal prosecutors announced this month. His name is Rogelio Flores Guzman and he helped construct the tunnel, which runs 2,000 feet from a Tijuana warehouse to the south San Diego depot. The U.S. has charged the 31-year-old with trafficking fentanyl, methamphetamine, heroin, cocaine and marijuana via a subterranean tunnel stretching from Mexico to a warehouse in Otay Mesa. When authorities entered the tunnel, they found around 575 packages of drugs worth nearly $30 million, according to a bulletin issued by the Department of Justice (DOJ). This sets a record because it marks the first time that five different types of drugs are found in a tunnel, according to the feds.

That $30 million in drugs might have killed a lot of Americans.

The article notes the changes in drug smuggling techniques since President Trump closed the border:

There was a significant increase in Mexican smuggling tunnels after President Donald Trump increased border security in 2017. One southern California news conglomerate reported that criminal organizations in Mexico were improving the tunnels they use to smuggle people and drugs under Trump’s border fence, making them smaller and maintaining a high level of sophistication that includes railways and electricity. “In San Diego, tunnels are usually sophisticated partly because of the highly organized criminal organization operating in Baja California – the Sinaloa Cartel – as well as the characteristics of Otay Mesa, a neighborhood that exists on both sides of the border,” the article states. “In the U.S. and in Mexico, Otay Mesa is crowded with warehouses, providing numerous spaces to hide tunnel entry and exit points.” Operating one right next to a U.S. border crossing packed with federal agents is quite brazen.

We need to stop the smuggling, but we also need to find a way to help the people who are addicted to these drugs. There would be no point in smuggling the drugs if there were no market for them in America.

The Festivus Report deals with government waste. The report can be found here.

The report includes the following graphic: 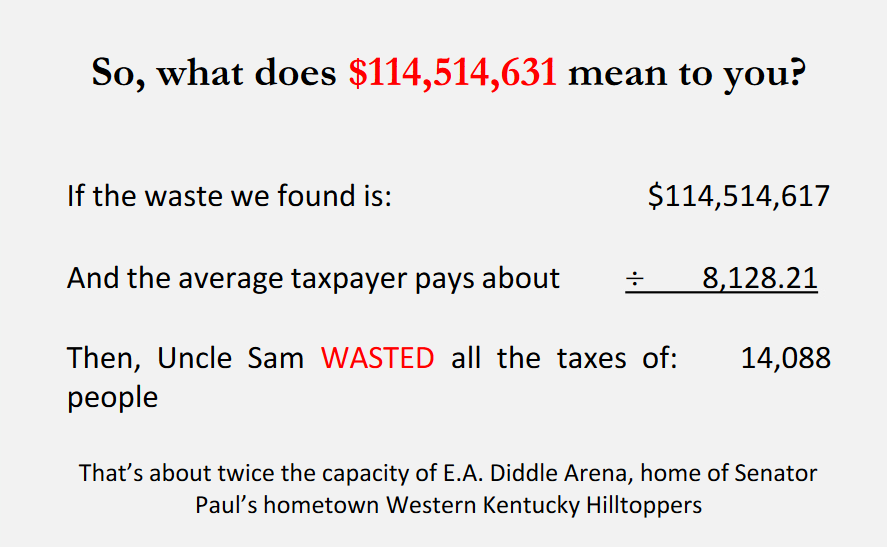 Some examples from the report: 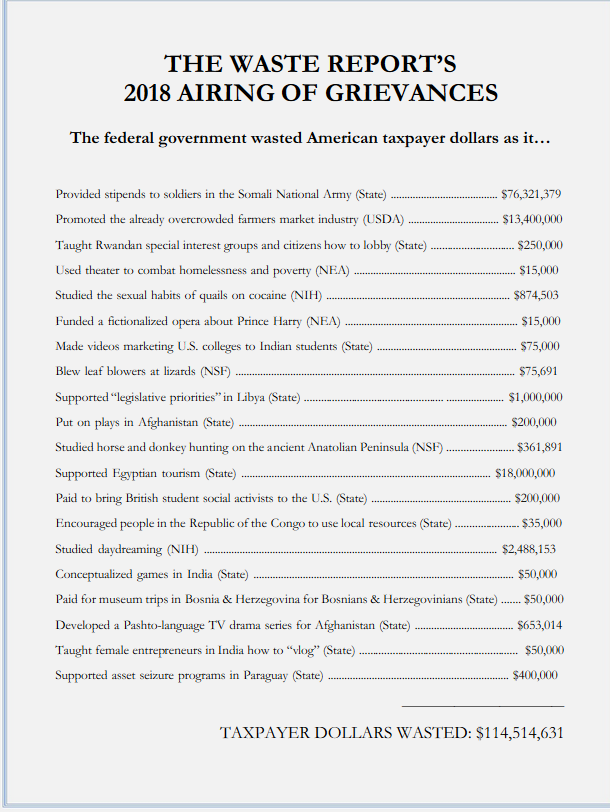 I truly think we can do much better. We have problems at home that are not being addressed because of the large amounts of money we spend overseas for questionable purposes. It is time to take care of the people in our own country first.