Yesterday Fox News posted an article about a recent drug seizure at the Arizona border.

A drug bust last year was hailed as the largest fentanyl bust in U.S. history—254 pounds seized at an Arizona border crossing.

The seizure came as the scourge of fentanyl continues to fuel the opioid epidemic, ravaging communities across the U.S. while killing tens of thousands of people.

“Fentanyl also continues to be a tremendous problem, contributing to 68,000 overdose deaths in the United States in 2018,” Mark Morgan, acting commissioner of U.S. Customs and Border Protection told Congress in November. He said CBP’s seizures of fentanyl rose by 30 percent in fiscal year 2019, totaling 2,770 pounds.

Fentanyl comes from China. Often it is smuggled into the U.S. from Mexico by drug cartels involved in a violent war with Mexican police and military forces.

The historic 254-pound bust was just one of a half-dozen big fentanyl busts recorded by law enforcement in recent years, a tally shows.

These six busts have led to the seizure of some 818 pounds of fentanyl–enough to kill 229 million people, according to authorities.

The article lists the six major drug busts. Please follow the link above to the article to see the details.

A new study released by the Centers for Disease Control and Prevention (CDC) shows how the opioid epidemic has ballooned over the past six years. The report found that from 2011 to 2016, the number of overdose deaths from the synthetic opiate fentanyl has risen by over 1000 percent.

The massive spike in fentanyl-related deaths was seen mainly in men. Up until 2013, the number of men and women who overdosed on fentanyl was about the same, but in 2014 the numbers began to diverge, and in 2016 there were three times as many men killed from an overdose as women.

Fentanyl is now considered the deadliest drug in America and is responsible for 29% of all overdose deaths in the nation.

CBS News posted an article today stating that the average life expectancy in the United States has increased for the first time in four years.

Life expectancy in the United States is up for the first time in four years.

The increase is small — just a month — but marks at least a temporary halt to a downward trend. The rise is due to lower death rates for cancer and drug overdoses.

“Let’s just hope it continues,” said Robert Anderson, who oversees the report released Thursday by the Centers for Disease Control and Prevention.

Cancer is the nation’s No. 2 killer, blamed for about 600,000 deaths a year, so even slight changes in the cancer death rate can have a big impact. The rate fell more than 2%, matching the drop in 2017.

“I’m a little surprised that rapid pace is continuing,” said Rebecca Siegel, a researcher for the American Cancer Society.

Most of the improvement is in lung cancer because of fewer smokers and better treatments, she said.

Also striking was the drop in drug overdose deaths that had skyrocketed through 2017. The death rate fell 4% in 2018 and the number of deaths dropped to about 67,400.

Deaths from heroin and prescription painkillers went down. However, deaths from other drugs — fentanyl, cocaine and meth — continued to go up. And preliminary data for the first half of 2019 suggest the overall decline in overdose deaths is already slowing down.

It’s still a crisis, said Katherine Keyes, a Columbia University researcher. “But the fact that we have seen the first year where there’s not an additional increase is encouraging.”

Nationally, for all causes of death, more than 2.8 million Americans died in 2018. That’s about 26,000 more than the year before, the CDC report found. The number went up even as the death rate went down, because the population is growing and a large group consists of retirement age baby boomers.

Hopefully we can find a way to stem the plague of illegal drugs in America.

On Wednesday Reuters reported that Michael Babich, former chief executive of Insys Therapeutics Inc (INSY.O), pleaded guilty on Wednesday to participating in a nationwide scheme to bribe doctors to prescribe an addictive opioid medication and has agreed to become a government witness.

Prosecutors allege that from 2012 to 2015, Kapoor, Babich and others conspired to pay doctors bribes in exchange for prescribing Subsys, an under-the-tongue fentanyl spray for managing severe pain in cancer patients.

Fentanyl is an opioid 100 times stronger than morphine.

Prosecutors said Insys paid doctors kickbacks in the form of fees to participate in speaker programs ostensibly meant to educate medical professionals about Subsys that were actually sham events.

Prior to working at Insys, Babich had worked at Kapoor’s venture capital firm.

Insys in August said it had agreed to pay at least $150 million as part of a settlement with the U.S. Justice Department. The company has said it has taken steps to ensure it operates legally going forward.

A class of synthetic drugs has replaced heroin in many major American drug markets, ushering in a more deadly phase of the opioid epidemic.

New numbers Thursday from the Centers for Disease Control and Prevention show that drug overdoses killed more than 70,000 Americans in 2017, a record. Overdose deaths are higher than deaths from H.I.V., car crashes or gun violence at their peaks. The data also show that the increased deaths correspond strongly with the use of synthetic opioids known as fentanyls.

Since 2013, the number of overdose deaths associated with fentanyls and similar drugs has grown to more than 28,000, from 3,000. Deaths involving fentanyls increased more than 45 percent in 2017 alone.

The article includes a number of graphs showing the increase in drug overdoses in recent years and the role that fentanyl  has played in that increase.

This is only one aspect of the opioid epidemic, but at least some action has been taken on this aspect. 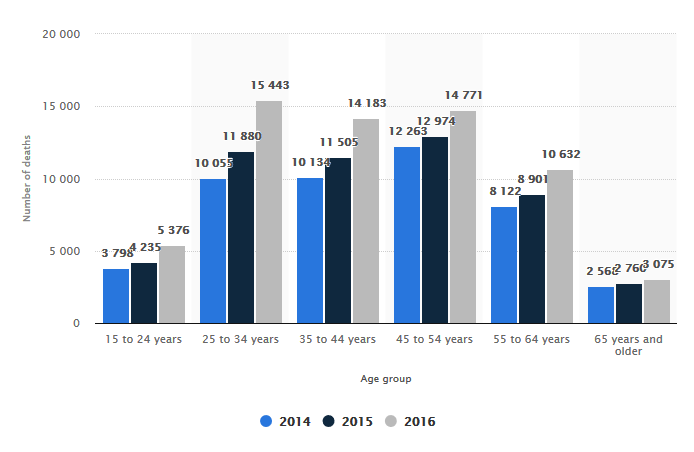