The American Thinker posted an article today about recent revelations concerning Dr. Fauci and his relationship to the Wuhan Institute of Virology.

Perhaps, at long last, the deadly reign of Anthony Fauci will come to an end. That’s because The Intercept, a hard-left publication, has revealed 900 pages of government documents definitively proving that Fauci used his position to fund gain-of-function research into bat viruses at the Wuhan Institute of Virology (“WIV”)—and then lied to Congress about it.

Since February 2020, the wizened Fauci has been the face of the government’s response to the pandemic. In the ensuing 20 months, Fauci was frequently wrong, incredibly arrogant, and deeply dishonest. Because he was the anti-Trump, though, we were stuck with him. Democrats, especially, appreciated how he dismissed treating COVID with time-tested and affordable medicines such as Hydroxychloroquine and Ivermectin and, instead, insisted on masks, lockdowns, and mandated vaccines.

In July, during a Senate Health Committee hearing, Sen. Rand Paul (R. KY) directly accused Fauci of using his position to fund illegal gain-of-function research at the WIV. The Hill, which reported on the hearing, assured its readers that Paul was making “an unsubstantiated accusation.”

Fauci came out swinging in response to Sen. Paul’s accusation. “Senator Paul,” he said, “you do not know what you are talking about.” He also said, “If anybody is lying here, Senator, it is you.”

The article explains what happened at the Intercept after the Congressional hearing mentioned above:

The Intercept aggressively attacked Sen. Paul after the hearing. Glenn Greenwald, who founded The Intercept and then got the boot for being insufficiently totalitarian, posits that it was then that the outlet sought to bolster its attack on Rand Paul by filing a FOIA request against the National Institutes of Health.

What happened, instead, was that The Intercept received over 900 pages of documents showing that it was Fauci who lied. Richard E. Ebright, a Professor of Chemistry and Chemical Biology at Rutgers, summarized what those documents revealed:

The article includes a number of screenshots of tweets about the documents.

This is one of the tweets: 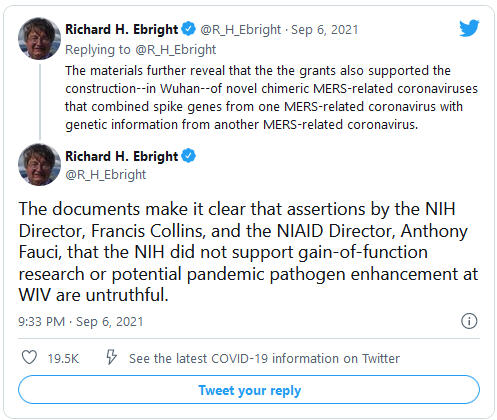 Last year revealed to Americans that our most lauded experts are idiots and, in the case of Fauci and Collins, highly culpable, dishonest idiots. Everything they told us has been proven wrong, from COVID’s origins, to the lockdowns and masks, to the attacks on affordable early treatments, to the vaccines’ safety and efficacy.

We’ve also learned that all Democrats and some Republicans who have political or administrative power will abuse it. Democrats also weaponized COVID to corrupt our elections and saddle us with a corrupt, senile president who has opened America’s borders, destroyed her economy, creating a glide path for Islamic extremists to come here, degraded America’s standing in the world, handed power to the Chinese, and, in all probability, will give a nuclear pass to Iran.

…And one more thing: Dr. Fauci needs to go to jail for the rest of his life because, through his funding illegal gain-of-function research, followed by his non-stop stream of dangerous lies, he has the blood of hundreds of thousands of Americans on his hands. Francis Collins can be his cellmate.

Lying to Congress is a crime. Does anyone expect the current Department of Justice to prosecute Dr. Fauci, the darling of the political left?

Yesterday The Conservative Treehouse posted an article about a recent statement by Dr. Fauci.

I’m more worried about what is happening behind the scenes in the non-COVID universe while everyone is distracted by the purposeful weaponization of the healthcare institutions.  It’s the other thing, the unseen activity, that is most troublesome when the leftists are this entrenched on a singular narrative.

In this clip from Anthony Fauci on ABC This Week Sunday [Rumble Link], the Director of the National Institute of Allergy and Infectious Disease, claims that individual rights no longer exist during the era of COVID-19.  When you consider the mindset of the far-left, his opinion on communal rights -vs- individual rights is right in line with the collectivist perspective.  These people are dangerous.

This is what Dr. Fauci said:

“The fact is, if you get infected, even if you are without symptoms, you very well may infect another person who may be vulnerable … So in essence, you are encroaching on their individual rights.”

It appears from the visible evidence, the Delta variant of COVID-19 may well be more transmissible; perhaps even more transmissible due to increased shedding from people who are vaccinated carriers of the virus. However, the death rate is lower than the traditional flu.

Unfortunately a lot of the reactions to the coronavirus have turned our Constitutional freedoms upside down. There is nothing in the U. S. Constitution that allows the government to shut down a private business or control the mask-wearing of the patrons who enter that business. These matters cannot even be decided by local governments unless there is a visible public nuisance. The rights of American citizens and business owners are theoretically protected by the U.S. Constitution. Unless we begin to elect representatives at all levels of government who understand that principle, we are in danger of losing those rights.