On Sunday, Forbes posted an article about fact checkers. The article specifically focuses on the fact-checkers who ‘check facts’ in the areas of Covid-19 and climate change, two of the more controversial topics of the day.

On the subject of Covid-19, the article notes:

Over two years into the pandemic, some of the most basic questions remain contentious, and even questions of data integrity remain mired in controversy. Are covid deaths over-reported since many may have died with covid rather than of covid? Did lockdowns and masks make any discernible difference to public health? Are there viable early treatments for the disease available or are vaccines approved under Emergency Use Authorization by the U.S. Food and Drug Administration (FDA) the only way to go? Are covid vaccines safe and effective? To each of these questions, the overwhelming majority of the fact checking sites (or fact checking departments of the legacy media) support the reigning narrative articulated by big pharmaceutical companies, government agencies such as the Centers for Disease Control and Prevention (CDC) and the FDA, and key government officials such as Dr. Anthony Fauci. The Biden administration welcomes this, and goes further in calling social media companies such as Facebook to partner with the White House to “fight misinformation” about covid-19.

When three distinguished medical people released the Great Barrington Declaration which contradicted the administration’s policies, their ideas were immediately squelched without debate. That’s not how science is supposed to work.

Like the media coverage of covid-19, climate change headlines in the mainstream media for the past three decades have been overwhelmingly one-sided. The basic premise is that the “science is settled” as in a tweet by then U.S. President Barack Obama in 2013: “Ninety-seven percent of scientists agree: climate change is real, man-made and dangerous” with the obvious subtext: “Who are you to challenge this?” And, as in the covid-19 context, the marginalization of climate sceptics has a long track record.

Two examples suffice how fact checks and editorializing serve to ensure that sceptics need not apply for access to the wider public. The first relates to the London-based BBC, fondly known as “beebs”, for its authoritative news broadcasts around the world as it emerged from the ashes of World War II. The British media giant was known and praised not only for its balanced news features but also for its nature documentaries. And in this space, two celebrities with the same first name – David Bellamy and David Attenborough – emerged in the 1970s, directing fascinating TV programs on nature and the environment from every corner of the globe into tens of millions of homes. As British commentator James Dellingpole wrote in his eulogy to Bellamy who died in 2019, “both were superstars…both were well on their way to becoming national treasures.”

Yet, while one, Attenborough, basks in the glow of international fame and is invited to many of the climate conferences as star speaker and delegate, the other claimed he had become a pariah as soon as he rejected group-think on global warming – describing climate change as “poppycock”. Though his climate scepticism killed his media career he remained utterly unrepentant. The BBC itself has made it clear to its staff that it will not invite climate sceptics to its interviews and panel discussions to balance debates because the “science is settled”

Without getting into details about the claims of the so-called factchecker, the key point here is to note the perversions of truth in representing the arguments critiqued in such “fact checks”. Perhaps this is best revealed by the fact that Facebook argued in its legal defence that its cited fact check was “just opinion” when faced by a lawsuit brought by celebrated journalist John Stossel who had posted two climate change videos.

Readers and viewers beware of this peculiar twist to the caveat emptor clause: the “fact checks” used by the mainstream news outlets and social media to police what you read and watch are just opinions.

Please follow the link above to read the entire article. We are being played.

Yesterday John Hinderaker at Power Line Blog posted an article illustrating how the mainstream media would try to discredit what the truck drivers in Canada are doing.

You no doubt are aware of the protest being staged by thousands of Canadian truck drivers who have now converged on Ottawa. The truckers began by protesting against a vaccination mandate for truckers crossing the U.S. border, but it has grown into a movement opposing extreme and irrational anti-covid measures, and promoting freedom generally.

Naturally, the liberal press is horrified. You likely have seen this bizarre editorial cartoon that appeared in–where else–the Washington Post: 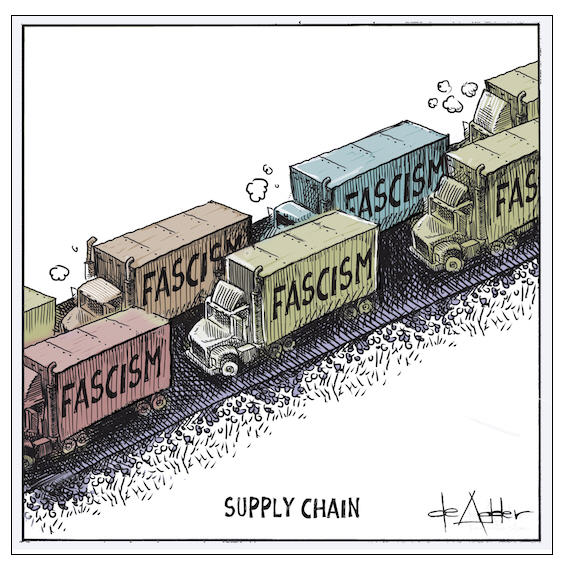 When I first saw the cartoon, I literally did not understand it. Someone had to explain that the Post’s cartoonist is calling the truckers who are demonstrating on behalf of freedom fascists. Freedom is slavery, after all.

The article goes on to note that the liberal media is hoping that the protest will turn violent (giving them further reason to condemn it).

Thousands of protesters on foot, many carrying handmade signs on hockey sticks, wandered through the parked vehicles and the slow-moving traffic or gathered on the lawn in front of Parliament. Some of them carried Canadian flags upside down; at least one flag had swastikas drawn on it.

Liberals always try to imply that if someone draws a swastika it means that person is pro-Nazi. Actually, it means (in this context, at least) that the person is accusing the Canadian government of using Nazi-like tactics. I don’t agree, but let’s not smear the protesters by inverting the intent behind their signs.

Here is more on the truckers’ protest from the BBC.

Defence Minister Anita Anand said the incidents were “beyond reprehensible”.

No incident described was even remotely violent. This one is darkly humorous:

Ottawa police said in a Twitter post that “several” investigations were now under way into the “desecration” of a number monuments in the capital city….

So now the Left is against desecrating monuments! I thought it had become more or less compulsory.

Putting aside whatever you may think about vaccination mandates, the hostility of the press’s response to any movement that expresses a desire for freedom is striking. 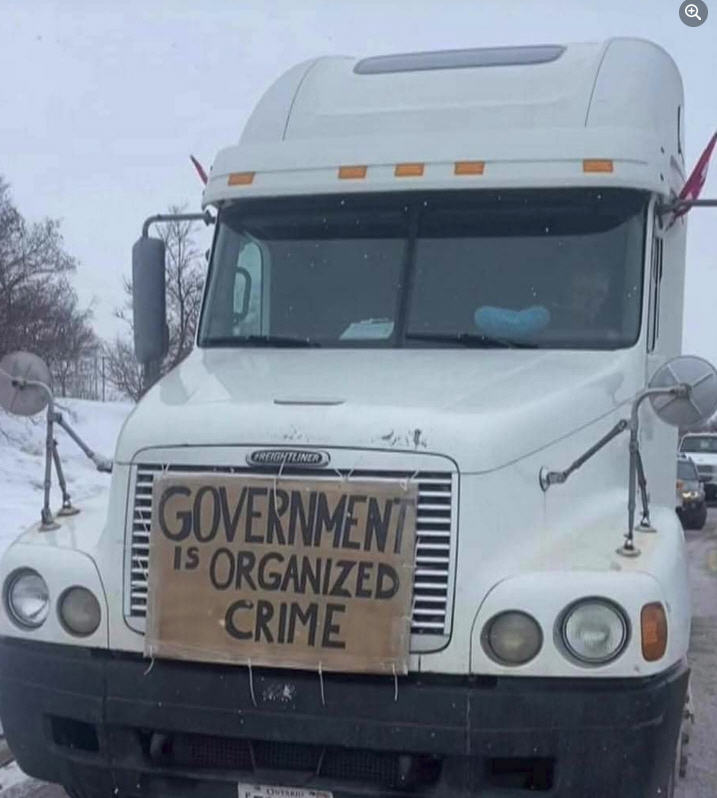 The ruling class does not like it when people begin to wake up.