The Gateway Pundit posted an article today about what seems to be a recurring event.

Arctic tours ship MS MALMO with 16 passengers on board got stuck in ice on Sep 3 off Longyearbyen, Svalbard Archipelago, halfway between Norway and North Pole. The ship is on Arctic tour with Climate Change documentary film team, and tourists, concerned with Climate Change and melting Arctic ice. All 16 Climate Change warriors were evacuated by helicopter in challenging conditions, all are safe. 7 crew remains on board, waiting for Coast Guard ship assistance.

The article reminds us of previous incidents:

In May 2009 two global warming activists were hoping to reach Greenland’s polar ice cap in a solar and wind powered yacht.

Unfortunately, they ran into cold and stormy weather and had to be rescued by an oil tanker.

I love the irony.

The climate is always changing. There are plant fossils under the ice in Greenland, an indication that the climate there was much warmer in a previous period of the earth’s history. There are sea fossils under the American southwest deserts, indicating that the area was under water at some point. There is an area in eastern North Carolina that is a great place to collect fossilized shark teeth, indicating that at some point it was under water. The planet is always changing. It is pure ego for man to believe that he is important enough to be in charge of weather. We have an obligation to keep the planet as clean as possible, but we also have an obligation to balance that obligation with the well being of the people who live on the planet.

Om Wednesday The Washington Free Beacon posted an article about the latest protest by a group of climate activists. I don’t claim to be a scientist and I don’t claim to be a climate expert, but there are a few facts that I learned in school that have not changed. There is a difference between weather and climate. Climate is cyclical. The climate we are living with is always changing. Generally significant change takes a long time. Scientists have found plant fossils under the ice in Greenland. That indicates that at some point that part of the earth was much warmer. Right now you can’t grow much in Greenland. During the Middle Ages there was a period of global warming. There were no SUV’s. Generally speaking, there is a lot involved in climate science that we simply cannot explain.

When group members (of Extinction Rebellion) planned to glue themselves to the Capitol in early July, providence prevented them. Earlier in the day, Sen. Bernie Sanders (I., Vt.), along with Reps. Alexandria Ocasio-Cortez (D., N.Y.) and Earl Blumenauer (D., Ore.) introduced legislation to declare a national state of climate emergency. It was one of the group’s primary demands, and nullified the need for drastic action.

But these climatistas had to do something. So instead of glue, on July 9 they marched on the Capitol armed with chalk to commit offenses that were “only slightly against the law,” according to spokeswoman Kaela Bamberger. Capitol Hill police prevented them from even approaching the building—much to their disappointment.

Two weeks passed, and Sanders’s legislation went nowhere. Extinction Rebellion leaders decided Tuesday was their chance for arrest. It was time to cover themselves in glue.

A few days before the big event, the group sent out a mass email advertising dramatic “action.” Journalists were contacted over encrypted messaging apps with vague instructions about when and where to arrive outside the Capitol.

Upon our arrival, Extinction Rebellion members shepherd us downstairs to the Cannon rotunda, where an underground passage leads into Capitol offices.

When several young people arrive and begin their work about half an hour later, it’s a bit underwhelming. Gluing oneself to a building sounds dramatic—just short of self-immolation—but in practice, it’s an unceremonious affair. The two climate warriors closest to me dump Gorilla Glue into their palms and plaster them to the open doors of the passageway. To make their roadblock complete, they glue their two free hands together, human chain style. If I had not seen the whole process, I would have thought they were overly romantic tourists.

After about 15 more minutes of shouting, singing, and a few tears from the climatistas, the police decide they’ve had enough. They clear the hallway and remove everyone from the doors, leading them out of the Capitol building. According to Extinction Rebellion spokespeople, 13 people were placed under arrest.

But there is no photo-op. Any arrests that occur happen away from the reach of cameras; the arrest-hungry climatistas get a pyrrhic victory.

“Well, that was anticlimactic,” Bamberger (Extinction Rebellion spokeswoman Kaela Bamberger) sighs to me as we exit the scene.

Because our schools and colleges are indoctrinating rather than teaching the scientific method, we can expect to see more of this.-

The Gateway Pundit posted an article today about one way the Braintree Massachusetts Police Department is dealing with the extreme heat that has hit New England this week. New England really does not tolerate heat well. New Englanders are spoiled–even when it is hot during the day it cools down at night. They handle blizzards beautifully, but they just don’t handle heat well. Every few years they get a real heat wave. This is that year.

The Braintree Police Department posted the following on the Internet: 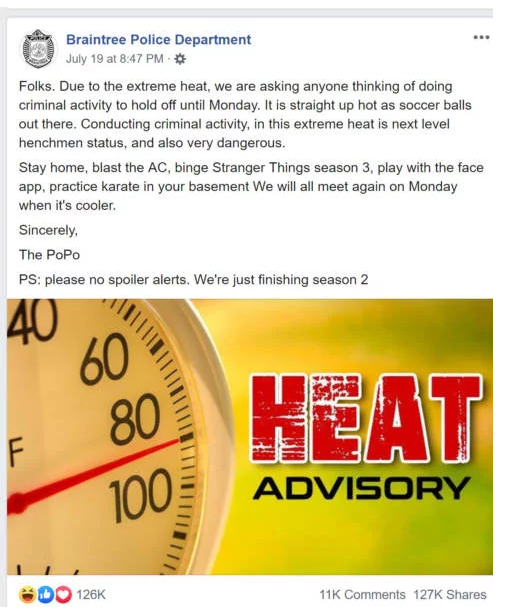 I love a police department with a sense of humor.

Power Line Blog is one of my favorite blogs. Wikipedia describes it as follows:

Power Line is an American political blog, founded in May 2002. Its posts were originally written by three lawyers who attended Dartmouth College together: John H. Hinderaker, Scott W. Johnson, and Paul Mirengoff. The site is published by Publir, founded by Joseph Malchow, also a Dartmouth graduate.

The site gained recognition among the American right for its role in covering the Killian documents story that aired during the 2004 Presidential campaign about forged documents relating to President George W. Bush’s term of service in the Texas Air National Guard, which kept him out of the Vietnam war.

The major writers for Power Line Blog are Steven F. Hayward, John H. Hinderaker, Scott W. Johnson, and Paul Mirengoff. Susan Vass, writing under the name “Ammo Grrrll,” contributes a humor column to the site each Friday. John Hinderaker lives in Minnesota and has written extensively about the new Congresswomen from Minnesota.

Yesterday John Hinderaker posted an article about the current weather in Minnesota.

I wrote here about the epic winter we are having in Minnesota, hard on the heels of “expert” testimony in Minnesota’s legislature to the effect that we don’t get much snow anymore because of global warming–false, snowfall has been increasing, not decreasing–and temperatures in Duluth are no longer expected to dip below 10 degrees. Less than two weeks after that testimony was given, the winter turned brutal and the temperature in Duluth fell to 25 below zero. The Al Gore Effect lives!

Meanwhile, here in the Twin Cities, the snow continued to fall. We have already smashed the record for snowfall in February by six or seven inches, and as I type this, there is a blizzard warning in effect for tonight. This was the view out my bedroom window this morning; some of these icicles are more than six feet long: 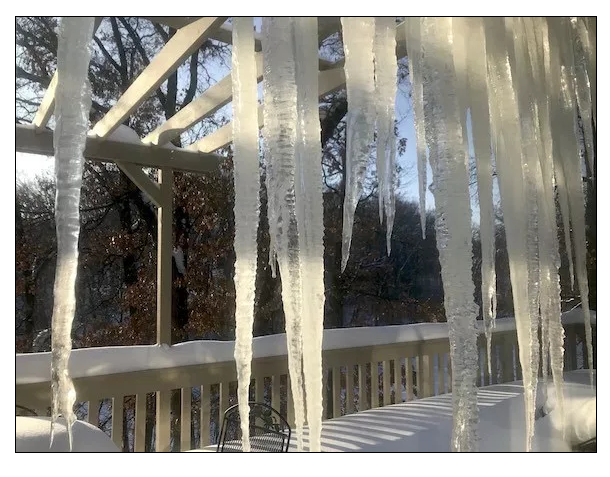 Memo to the alarmists who warned us that children will grow up, no longer experiencing snow: not to worry.

Of course, all of this is just “weather,” as the alarmists tell us. But climate is experienced as weather, and the alarmists have made countless predictions about weather, pretty much all of which have turned out to be false. A model that generates false predictions has the same value as a losing lottery ticket. So I guess we should be happy that a blizzard is on the way.

I guess the people in Minnesota would welcome global warming. 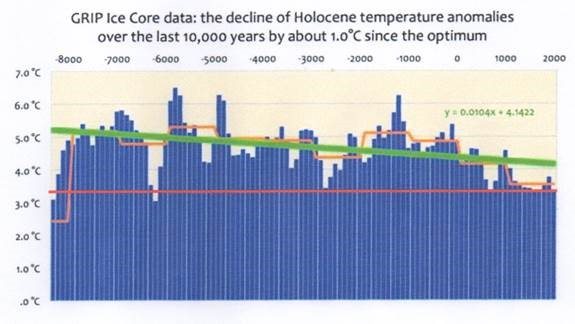 One of my favorite websites is WattsUpWithThat.com. It is a bit scientific for me, but it has one of the most down-to-earth, practical views on global warming I can find. Yesterday WattsUpWithThat posted an article with their take on the current heat wave. The article included this picture:

This is weather, not climate. It is caused by a persistent blocking high pressure pattern. In a day or two, that red splotch over the eastern USA will be gone.

Every summer temperatures climb. There may be climate change due to climate cycles that have been with us since the Earth was formed.,but we have had heat waves since I was a small child (back in the age of dinosaurs). There was a recent article noting that there has been global warming on Mars. If this is the case, I would tend to look at the sun as the culprit–not carbon dioxide or SUV‘s.

In case you are like charts better than pictures, this is the weather in June over the past 30 years or so: 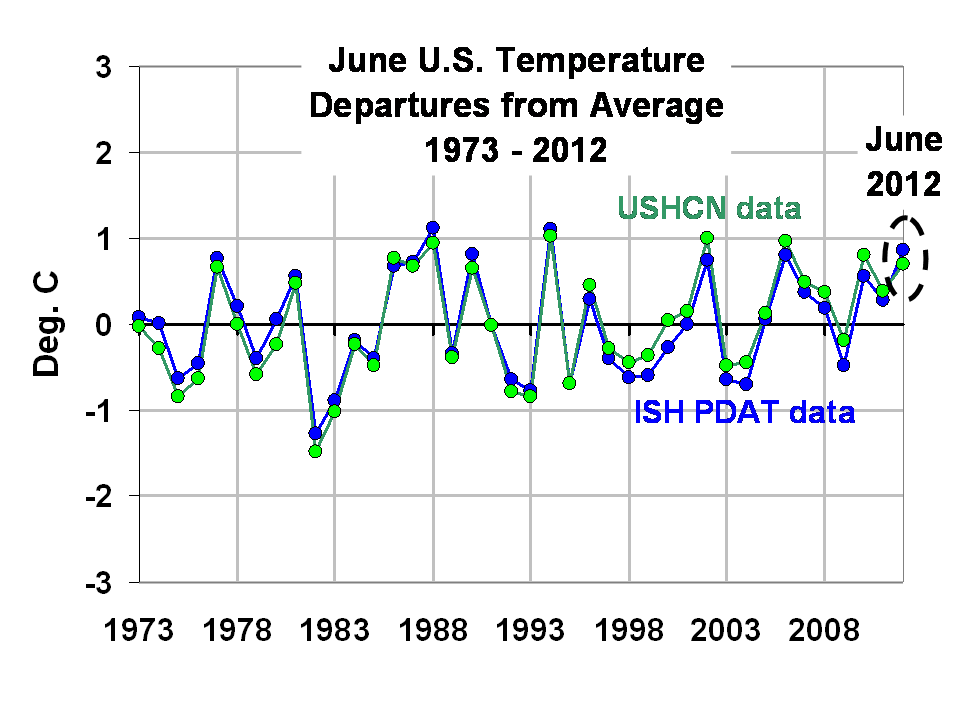 I’m really not worried about global warming yet. On Saturday, November 5, my favorite scientific site, wattsupwiththat, posted a story stating that the National Climatic Data Center (NCDC) data shows that the United States has experienced cooler summers and colder winters in the past 10 years.

The article featured the chart below.

As anyone who regularly reads this blog knows, I hate cold weather. Now I know that the fact that I am convinced that I am freezing most of the time in New England is not just my imagination.

Please follow the link above to read the entire article. There are all kinds of charts showing changes in temperature in America over the past century. The bottom line is very simple–global warming is a myth. We don’t need to cripple the American economy due to junk science!