The basic foundation of any western society is the family. Unfortunately many in the political left have been on a mission to destroy the American family since the 1960’s. On Wednesday The Daily Wire posted an article about the status of the two-parent family in America.

Children need a mother and a father — a context that more American youth than ever are lacking.

Among the 130 million households in the United States, only 17.8% feature married parents with children — down from over 40% in 1970, according to the Census Bureau.

The article quotes the Daily Mail:

There are currently just 23.1 million American homes with those ‘nuclear families,’ which is the fewest since 1959. The reasons given for the drop include the pandemic delaying marriage and a continued decline in birth rate.

Americans are also living alone at a higher rate than they used to. The percentage of adults in the US living with a spouse was 50 percent, down from 52 percent 10 years ago. Over 37 million adults lived alone in early 2021, up from 33 million in 2011. As far back as 1960, 87 percent of adults lived with a spouse.

Oddly enough, there is a government program that is related to this decline: 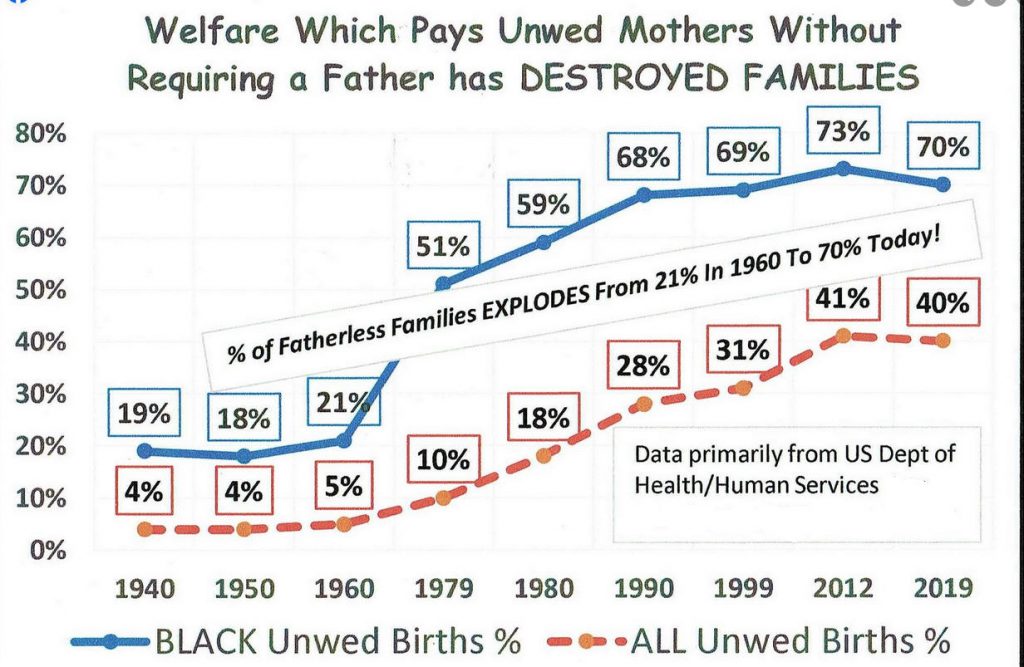 When the War on Poverty began paying single mothers, the number of single mothers increased. When the government subsidizes something, that something increases. Television also played a role in glamorizing single-parent families. Murphy Brown was a prime example.

The article at The Daily Wire also notes:

Analysts and commentators have pointed toward declining rates of religiosity, higher living expenses, the permutation of LGBTQ ideology, and even climate alarmism to explain the erosion of the American family. Indeed, the United States economy is already feeling pressure from the nation’s demographic crisis — for example, through the looming insolvency of Social Security and other programs.

I would suggest that a decline in acceptance of the basic values that America embraced before the 1970’s also plays a major role. Again, the culture has downplayed the importance of fathers and the role of mothers in raising their children. Children who grow up in stable two-parent homes have a much better chance of being successful and well-adjusted than children who grow up fatherless.

Bad governance has consequences. Yesterday The New York Post posted an article about what is happening to New York. California may not be far behind.

More residents escaped from New York over the last year than from any other state, according to estimates released by the US Census Bureau on Tuesday.

New York has been losing locals since 2016, but the most recent drop was significantly larger than in years past.

It was also the state with the nation’s biggest population decline, followed by Illinois with a 0.63 percent dip, Hawaii with 0.61 percent and West Virginia with 0.58 percent.

The estimates are based on the 2010 Census, and the official 2020 Census results will be released next year, along with a new legislative map.

The once-a-decade national head count determines how the 435 seats in the House of Representatives are divided among the 50 states based on the population changes recorded.

If the numbers hold, New York could lose one seat, dropping to 26, according to an analysis by William Frey, chief demographer for the Brookings Institution, the New York Times reported.

That would leave the Empire State with fewer seats than Florida for the first time ever, the report said.

That seems only fair since many of the people leaving New York are headed to Florida. However, it will be interesting to see if the transplanted New Yorkers bring the same bad ideas to Florida that caused the downfall of New York.

In August of 2017, Investor’s Business Daily posted an editorial that is still significant today. The editorial dealt with voter fraud.

Elections: American democracy has a problem — a voting problem. According to a new study of U.S. Census data, America has more registered voters than actual live voters. It’s a troubling fact that puts our nation’s future in peril.

The data come from Judicial Watch’s Election Integrity Project. The group looked at data from 2011 to 2015 produced by the U.S. Census Bureau’s American Community Survey, along with data from the federal Election Assistance Commission.

As reported by the National Review’s Deroy Murdock, who did some numbers-crunching of his own, “some 3.5 million more people are registered to vote in the U.S. than are alive among America’s adult citizens. Such staggering inaccuracy is an engraved invitation to voter fraud.”

Murdock counted Judicial Watch’s state-by-state tally and found that 462 U.S. counties had a registration rate exceeding 100% of all eligible voters. That’s 3.552 million people, who Murdock calls “ghost voters.” And how many people is that? There are 21 states that don’t have that many people.

And, in at least two nationally important elections in recent memory, the outcome was decided by a paper-thin margin: In 2000, President Bush beat environmental activist and former Vice President Al Gore by just 538 votes.

Sen. Al Franken, the Minnesota Democrat, won his seat by beating incumbent Sen. Norm Coleman in 2008. Coleman was initially declared the winner the day after the election, with a 726-vote lead over Franken. But after a controversial series of recounts and ballot disqualifications, Franken emerged weeks later with a 225-seat victory.

Franken’s win was enormous, since it gave Democrats filibuster-proof control of the Senate. So, yes, small vote totals matter.

We’re not saying here that Franken cheated, nor, for that matter, that Bush did. But small numbers can have an enormous impact on our nation’s governance. The 3.5 million possible fraudulent ballots that exist are a problem that deserves serious immediate attention. Nothing really hinges on it, of course, except the integrity and honesty of our democratic elections.

I don’t claim to be a mathematical genius, but logically it doesn’t seem as if you should have more registered voters than live people. I understand that there can be a delay if a person dies, but hopefully that person can be taken off of the voter rolls quickly. There are also cases of intentional fraud. A friend of mine checked the voter rolls for the names of anyone registered to vote at her address. She found three names that she did not even recognize.

Recently there has been a move in some areas to compare voting rolls with the names of those refusing jury duty by stating that they are not American citizens. A number of people have been charged with crimes for voting when they were not eligible to vote.

We need honest elections. That is one reason that voter identity is a good idea. We also need checks and balances on our data–reporting and storing data. Recently a friend checked election data and found that it has been altered after certification. That should not happen.

On Friday, The National Review posted an article about voter registration in America. It seems that there are 3.5 million more people on the election rolls than are eligible to vote.

Some 3.5 million more people are registered to vote in the U.S. than are alive among America’s adult citizens. Such staggering inaccuracy is an engraved invitation to voter fraud.

Cleaning up our voter rolls would not be a major undertaking. All that is needed is to compare Census data, voter rolls, and possibly information from various states’ motor vehicle and license registries.

The article notes that research into Judicial Watch’s information showed 462 counties of the 2,500 studied showed more voters than citizens of voting age.

These 462 counties (18.5 percent of the 2,500 studied) exhibit this ghost-voter problem. These range from 101 percent registration in Delaware’s New Castle County to New Mexico’s Harding County, where there are 62 percent more registered voters than living, breathing adult citizens — or a 162 percent registration rate.

Washington’s Clark County is worrisome, given its 154 percent registration rate. This includes 166,811 ghost voters. Georgia’s Fulton County seems less nettlesome at 108 percent registration, except for the number of Greater Atlantans, 53,172, who compose that figure.

Even more suspiciously, when GOP governor Rick Scott tried to obey these laws and update Florida’s records, including deleting 51,308 deceased voters, Obama’s Justice Department filed a federal lawsuit to stop him. Federal prosecutors claimed that Governor Scott’s statewide efforts violated the 1965 Voting Rights Act, although it applies to only five of Florida’s 67 counties. Then–attorney general Eric Holder and his team behaved as if Martin Luther King Jr. and the Freedom Riders fought so valiantly in order to keep cadavers politically active.

Whether Americans consider vote fraud a Republican hoax, a Democratic tactic, or something in between, everyone should agree that it’s past time to exorcise ghost voters from the polls.

Voter identification would clear up some of these problems, but the fact remains that the voter rolls need to be cleared up. Our Representative Republic depends on the honesty of our elections.