Most of us who live in middle class America are not overly concerned with the limit placed by the Trump administration on the state and local tax (SALT tax) deduction on our federal income tax. Generally that deduction impacts people who live in New York, New Jersey, Connecticut, Massachusetts, California and one or two other states. Generally speaking, the people who are impacted by the limitations placed on that deduction are among the high earners among us who own large homes and live in states with high real estate taxes. Limiting that deduction was a way to end the practice of fiscally responsible states subsidizing fiscally irresponsible states. Limiting that deduction should have jarred the states impacted into being more fiscally responsible. Not only did that no happen, the Democrat Congress wants to end that limit–thus providing a tax break for the rich–something they continuously accused President Trump of doing.

On Tuesday Steven Hayward posted an article at Power Line Blog about the move to end the limits on the SALT deduction.

If you need proof that Democrats are really on the side of the plutocracy, look no further than New York’s Democratic House members, who today wrote to Speaker Pelosi threatening to vote against any of (P)resident Biden’s tax increase proposals unless the bill includes full repeal of the state and local tax (SALT) deduction limitations that were part of Trump’s 2017 tax reform. The SALT limitation was the single most “progressive” tax increase on the rich in years, but chiefly in high tax states like California, Illinois, New York, and New Jersey.

Read the letter for yourself and enjoy the casuistry: We need SALT repeal, the New York Dems day, so that our taxpayers won’t be “double-taxed,” but of course their citizens only face this problem because those states impose those extra high taxes. And most of the benefit of the SALT deductions go to high income people—the very people Dems are always telling us should pay their “fair share,” which they never define in any concrete way. “Fair share” just means “more.” Well, Trump delivered that, so what’s the problem?

I also like how the letter, in paragraph three, admits that cutting taxes on the rich will help spur job growth. I thought liberals didn’t believe in supply-side tax cuts?

This is the letter: 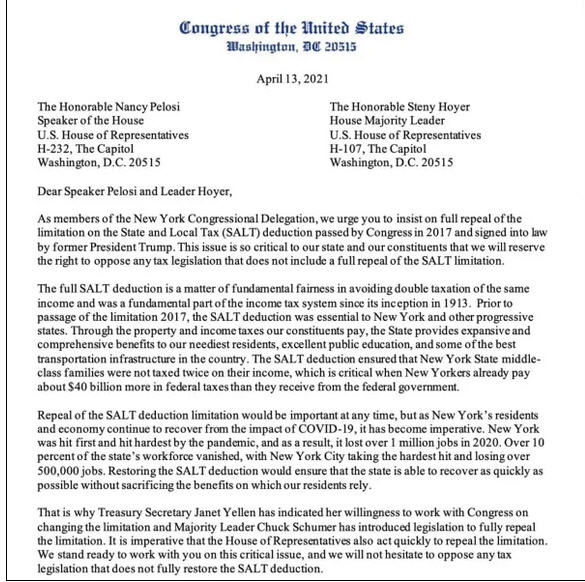 I guess the Democrats really do like tax cuts for the rich.