CNS News posted an article yesterday about President Trump’s proposal to bring peace to the Middle East. The proposed plan allows Jerusalem to remain the undivided capital of Israel and offers financial incentives to Hamas and Hezbollah to end their reign of terror.

“Palestinians have been trapped in a cycle of terrorism, poverty, and violence, exploited by those seeking to use them as pawns to advance terrorism and extremism,” Trump said, adding that he returned from his visit “determined to find a constructive path, and it’s got to be a very powerful path forward in the Israeli-Palestinian conflict.”

“To further this effort, I also met with President Abbas at the White House. Forging peace between Israelis and Palestinians may be the most difficult challenge of all. All prior administrations from President Lyndon Johnson have tried and bitterly failed, but I was not elected to do small things or shy away big problems,” he said.

The president said he delivered his “vision for peace, prosperity, and a brighter future for Israelis and Palestinians” to Israeli Prime Minister Benjamin Netanyahu, who was on hand for the joint White House press conference.

“As I have seen throughout my long career as a dealmaker, complex problems require nuanced, fact-based remedies. That is why our proposal provides precise, technical solutions to make Israelis, Palestinians, and the region safer and much more prosperous,” he said. “My vision presents a win-win opportunity for both sides, a realistic two state solution that resolves the risk of Palestinian statehood to Israel’s security.”

Netanyahu has agreed to “endorse the vision as the basis for direct negotiations,” Trump said, calling it a “giant step toward peace.“

“This is the first time Israel has authorized the release of a conceptual map illustrating the territorial compromises it is willing to make for the cause of peace, and they’ve gone a long way,” Trump added.

I am never optimistic about peace in the Middle East, but this is an interesting proposal.

First, the War on Poverty has failed to achieve Johnson’s goal: to “strike at the causes, not just the consequences of poverty.” Since he declared “unconditional war,” poverty has thumbed its nose at its would-be conquerors.

The official poverty rate has hovered between ten and fifteen percent for 50 years. But that is only a part of the story. Since the 1960s, the institutions that contribute to self-sufficiency—namely, marriage and work—have declined. Today, more than 40 percent of children are born outside marriage; in 1964, only 7 percent were.

…Robert Rector, senior research fellow in domestic policy studies at the Heritage Foundation, writes that “taxpayers have spent $22 trillion on Johnson’s war. Adjusted for inflation, that’s three times the cost of all military wars since the American Revolution.” It’s time to change course. We need a new strategy against poverty.

The changes in our culture are part of the problem, but there is another increasing problem–people who come to this country to take advantage of our generous welfare system.

President Trump is set to save American taxpayers billions of dollars as his administration announces a new rule on Monday that will essentially ban welfare-dependent legal immigrants from permanently resettling in the United States.

A new regulation set to be published by the Trump administration will ensure that legal immigrants would be less likely to secure a permanent residency in the U.S. if they have used any forms of welfare in the past, including using subsidized healthcare services, food stamps, and public housing.

Below is a chart of current welfare expenditures: 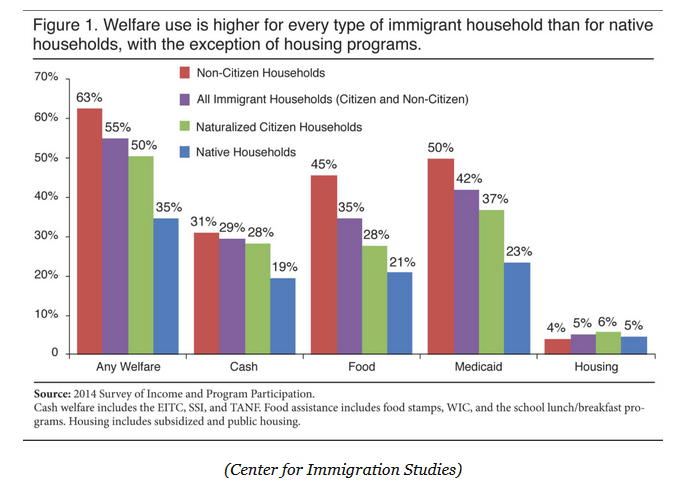 I have no problem with having a safety net, but it seems that our priorities are out of order. The first group of people that we should be helping are our veterans. Too many of them come home and need help to get on their feet when they separate from the military. I would like to see that as our first priority in welfare spending.

Currently, there is an estimated record high of 44.5 million foreign-born residents living in the U.S. This is nearly quadruple the immigrant population in 2000. The vast majority of those arriving in the country every year are low-skilled legal immigrants who compete against working and middle-class Americans for jobs.

If we don’t get a handle on immigration, we are going to bankrupt America.

Yesterday The Daily Signal posted an article about the current state of American welfare spending. It seems that those leaders who believe that we should become more like Europe and Scandinavia in our welfare spending practices might want to take another look.

The U.S. Census Bureau has released its annual poverty report. Conventional wisdom holds that the U.S. has a small social welfare system and far more poverty compared with other affluent nations. But noted liberal scholars Irwin Garfinkel, Lee Rainwater, and Timothy Smeeding challenge such simplistic ideas in their book “Wealth and Welfare States: Is America a Laggard or Leader?”

Garfinkel and his colleagues examine social welfare spending and poverty in rich nations. They define social welfare as having five components: health care spending, education spending, cash retirement benefits, other government cash transfers such as unemployment insurance and the earned-income tax credit (EITC), and non-cash aid such as food stamps and public housing.

The authors find that in the U.S., social welfare spending differs from that in other affluent countries because it draws heavily on both public and private resources. By contrast, in Europe, government controls most of the resources and benefits. For example, in the U.S., government health care spending is targeted to elderly and low-income persons; the American middle and working classes rely primarily on employer-provided health insurance. The U.S. government health care system is, therefore, more redistributive than the systems of most other developed nations.

The article goes on to explain that ‘poor’ families in America usually have air-conditioning, a car, and cable or satellite television. Poverty in America looks very different than poverty in many other parts of the world.

It is, of course, a good thing that left-wing claims of widespread deprivation in the U.S. are inaccurate. But government welfare policy should be about more than shoveling out a trillion dollars per year in “free” benefits. When President Lyndon Johnson launched the War on Poverty, he sought to decrease welfare dependence and increase self-sufficiency: the ability of family to support itself above poverty without the need for government handouts. By that score, the War on Poverty has been a $24-trillion flop. While self-sufficiency improved dramatically in the decades before the War on Poverty started, for the last 45 years, it has been at a standstill.

A decent welfare system would return to Johnson’s original goal of reducing poverty by increasing self-sufficiency. It would require able-bodied recipients to work or prepare for work if they are to receive benefits. It would reward, not penalize, marriage. In other words, it would be the exact opposite of the welfare behemoth we currently have.

We have lost the War on Poverty. We are spending billions of dollars to create generational dependency rather than to create economic independence. It is time to refocus and encourage working instead of collecting money from the government. This process was begun under President Clinton (with the assistance of Newt Gingrich), but halted under President Obama. It’s time to bring a work requirement back into the welfare program. Please  follow the link and read the TopRightNews article about what is happening in Maine to bring welfare programs back under control.