John Hinderaker posted an article at Power Line Blog yesterday about one aspect of the latest draft of the Democrat Party platform. The article notes that the platform is largely an attack on white people. The platform mentions whites or whiteness 15 times, never in a positive light.

The article includes a quote from the platform:

Well, the article includes a chart from the 2018 Census: 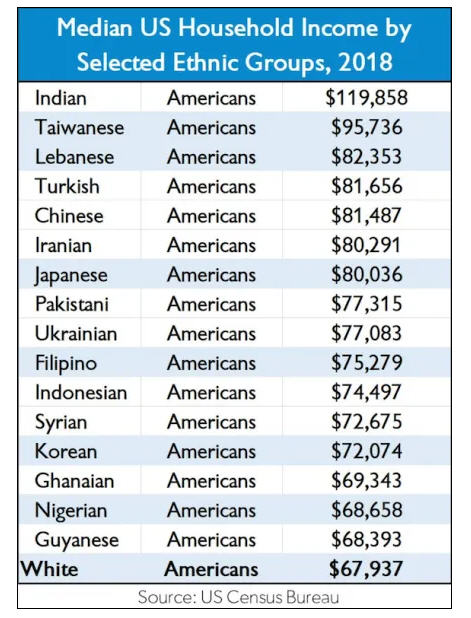 As you can see, the charge included in the draft of the Democrat Party platform is not true.

The Democrats are right to focus on median income as a basic indicator of well-being, but they have to lie about the statistics. They can’t face the reality that America is a land of opportunity, and there is nothing standing in the way of people of any ethnicity succeeding in the most fundamental way: making money.

If the United States were really a white supremacist society, as the Democrats claim, the facts would be very different. Whites incomes would dwarf non-white incomes. That obviously is not the case, which demonstrates that America is not a racist or white supremacist society. The Democrats are wrong. It is hard to see why voters would entrust with power a party that falsely slanders its own country.

The platform is being put together with a purpose. After seeing the racism and the lies in the platform, I wonder what that purpose is.

Heritage.org included this chart in its “Federal Budget in Pictures” series. Please follow the link and look at the entire series.