On Thursday, The U.K. Daily  Mail posted an article that contained the following chart: 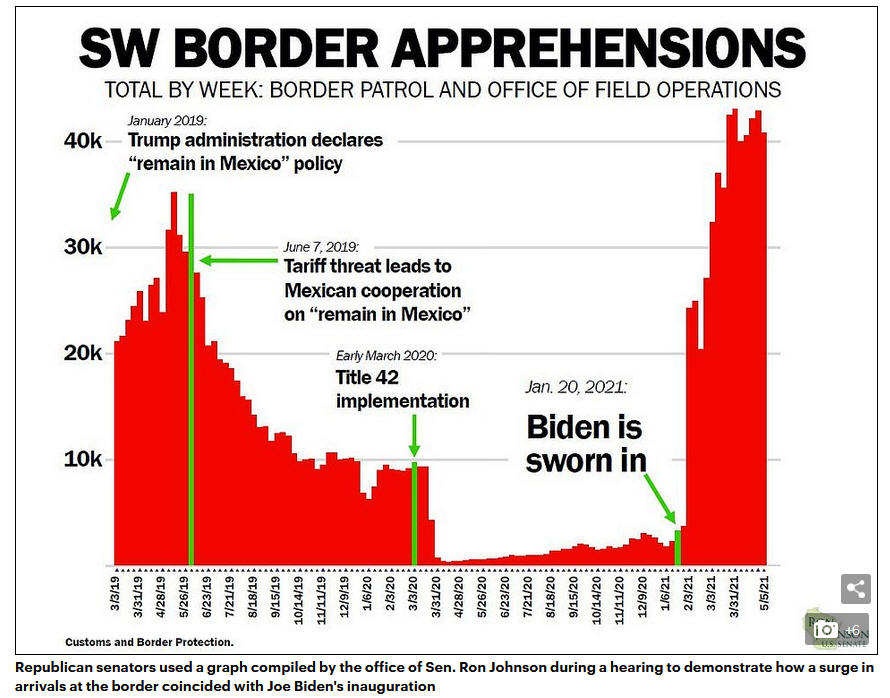 New charts reveals exactly how Joe Biden‘s inauguration triggered a surge of immigrants arriving at the southern border, despite repeated claims from administration officials that they inherited a broken system.

The graphs – showing that border detentions and child arrivals dropped to their lowest level in years at the end of 2020 before rocketing as soon as Biden took office – derailed efforts by the top U.S. homeland security official to deliver a rosy message when he appeared before senators on Thursday.

The article contained another chart about the number of unaccompanied minors crossing the border: 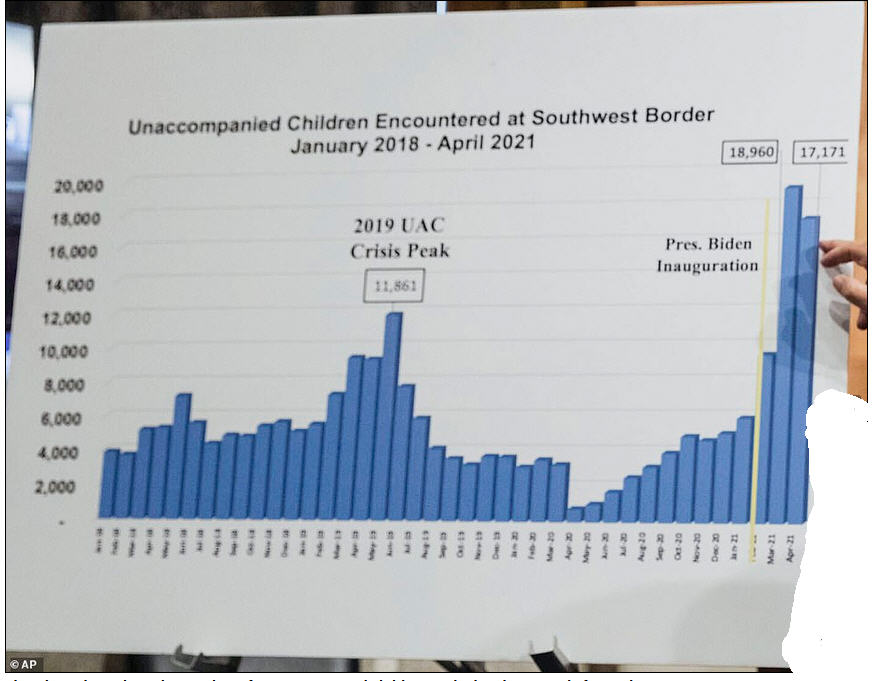 However, the graphs, compiled from Customs and Border Protection data, was used by a string of Republican senators to question his optimistic view that the administration’s position that it was not to blame.

Sen. Mitt Romney expressed his incredulity at what he was being told.

‘I must admit that I have found this hearing to be stunning in that it seems Mr Secretary that you’re proud of the progress being made by the administration, that things are going well at the border,’ he said.

‘And, and I look at this chart that was prepared by Senator Johnson, and I see an extraordinary crisis, I mean, do you recognize this as an alarming crisis?’

‘Senator, I look at immigration as a challenge that has been persistent for many many years … ‘ he said before being cut off.

This should not be a partisan issue, but there is a reason it is. If the Democrats expected the illegal immigrants to vote Republican when the immigrants received voting rights, you can bet that the wall would be finished and twice its current height. Obviously the Democrats are expecting the illegal immigrants to be granted voting rights eventually and to vote Democrat in gratitude for letting them into the country. Meanwhile women are being raped, children are abandoned, and the cartels are getting richer and more powerful. Policies matter.

On Sunday Breitbart reported that five migrant children had been abandoned on a Texas farm Saturday night.

A Texas rancher living north of Eagle Pass discovered five unaccompanied migrant children abandoned by smugglers on their farmland Saturday night. The five small girls, ranging in ages from one to six years old, were led across the Rio Grande River and abandoned the evening before. The human smugglers left them with no food, water, or any adults to care for them throughout the night.

This incident comes as the Biden Administration opens additional Health and Human Services (HHS) Intake Sites to accommodate a surge in unaccompanied migrant children being smuggled into the United States. The children’s parents are sending the children alone to avoid immediate expulsion under the CDC Title 42 emergency order if crossing as a family unit. According to a law enforcement source, the parents or other relatives illegally enter the United States afterward to claim the children to avoid deportation once the children are freed by HHS.

This is only one example that illustrates why we need to finish the wall and secure the border. What is happening on our southern border is inhumane. We are empowering and enriching the drug cartels and human traffickers who have not regard for the lives of the people trying to come into America. We need to go back to the policy of remain in Mexico until your asylum case is heard. We also need to secure the border. Those children are very fortunate to be alive. Others are not so fortunate. Meanwhile we have people coming into our country illegally who do not have the best interests of America in mind.

The situation at our southern border is totally avoidable. We need someone in Washington to stand up and make the changes needed to secure the border, secure the safety of Americans in border states, and prevent small children from being abandoned in the desert.

Yesterday The Conservative Treehouse reported that unaccompanied children illegally crossing into the United States from Mexico are being given a copy of Kamala Harris’ book, “ Superheroes are Everywhere.”

Baltimore Mayor Catherine Pugh was arrested for using her authorship of a book as a pay-to-play scheme for personal financial gain {Go Deep}.  In what appears to be a similar situation, unaccompanied alien children (UAC’s) are being given a book authored by Kamala Harris.

…You can be sure that if Trump books were being purchased with taxpayer funds to be distributed to thousands of people, the leftists would immediately demand an investigation.  However, when Kamala Harris does it… crickets.

In an interesting side note:  Kamala Harris was in New Hampshire Friday and Jill Biden was in Arizona Friday.  Both Arizona and New Hampshire are conducting ballot audits.  Interesting coincidence…

I guess using taxpayer money to purchase your books to give away is the new revenue producing scheme used by Democrats. How you classify income from book royalties can also impact your taxes.

Joe Biden responded to President Trump’s partial suspension of payroll-tax collections with a statement calling it the “first shot in a new, reckless war on Social Security.” He continued: “Our seniors and millions of Americans with disabilities are under enough stress without Trump putting their hard-earned Social Security benefits in doubt.”

Mr. Biden’s objections might be more persuasive had he and his wife, Jill, not gone out of their way to avoid funding seniors’ entitlement benefits. According to their tax returns, in 2017 and 2018 the Bidens and his wife Jill avoided payroll taxes on nearly $13.3 million in income from book royalties and speaking fees. They did so by classifying the income as S-corporation profits rather than taxable wages.

The Bidens did pay themselves “salaries” from their corporations—CelticCapri Corp. and Giacoppa Corp.—of nearly $750,000 between them over two years, and they paid full taxes on that income. But they circumvented the payroll tax on the nearly 95% of their income that remained. A tax expert interviewed by the Journal in 2019 called the Bidens’ scheme “pretty aggressive”; another told the paper it served solely to avoid the payroll taxes.

Gaming the system is a way of life for our current President and Vice-President.