One of the great things about America is that many Americans are homeowners. As homeowners, they create individual homes that reflect their personalities. That is the reason driving through many of our cities can be a fascinating study of architecture and how it changed through our history. Well, if the Biden administration gets its way, single-family housing will be a thing of the past.

The National Review posted an article today detailing how the Biden administration is planning to eliminate single-family housing:

How, exactly, does Biden plan to end single-family zoning? According to the fact sheet released by the White House, “Biden is calling on Congress to enact an innovative new competitive grant program that awards flexible and attractive funding to jurisdictions that take concrete steps to eliminate [‘exclusionary zoning’].” In other words, Biden wants to use a big pot of federal grant money as bait. If a county or municipality agrees to weaken or eliminate its single-family zoning, it gets the federal bucks.

The wildly overreaching Obama-Biden era Affirmatively Furthering Fair Housing (AFFH) regulation — which Biden has pledged to revive — works in a similar fashion. The difference is that by adding another gigantic pot of federal money to the Community Development Block Grants that are the lure of AFFH, Biden makes it that much harder for suburbs to resist applying — and that much more punishing to jurisdictions that forgo a share of the federal taxes they’ve already paid so as to protect their right to self-rule.

Are federal carrots enough, however? Prosperous suburbs may forgo the grants in an effort to secure their independence. The success of Biden’s initiative depends in part on exactly how much money gets allocated to grants tied to zoning reform. The details of that ask haven’t yet been released, but the $213 billion allocated to Biden’s total affordable housing initiative leave room for an awfully big pot for the anti-zoning portion.

I don’t think our Founding Fathers envisioned a country where the government could tell you what kind of a house you could live in.

Last summer, when California floated a measure to kill single-family zoning, there was powerful opposition from residents who objected to a law that would make their neighborhoods denser, noisier, and more filled with traffic. Predominantly minority residents in South Los Angeles saw the bill as an “affront to how hard Black Americans fought to join single-family neighborhoods, battling redlining, racist covenants and even targeted violence. And they worried that suddenly relaxing zoning rules would not only ruin the low density they enjoyed, but also unleash an investment flood that would accelerate displacement of the Black community as developers scooped up old homes and built new ones unaffordable to most in the community.”

The zoning issue is tough and complex. It balances principled libertarian objections to zoning and the interests of developers, on the one hand, against core principles of federalism and local control, on the other. Massive spending and taxation are fundamental to the federal effort to override local zoning laws. Neighborhood preservation vies with “creative destruction.” There are plenty of complex, conflicting, and legitimate considerations in the balance. But reducing the zoning issue to bogus charges of “racism” is the way Democrats play the game nowadays.

If Republicans find the courage to stand up to the usual nonsense and oppose this big-government attempt to kill off the federalist system itself, they will find not only the vast majority of Republicans, but a great many independents and Democrats in their corner.

This is something to watch. If the infrastructure bill passes the Senate, it will not only kill our wallets, it will also end a lot of our freedom to choose where and how we live.

Yesterday The National Review posted an article about a bill that just passed the House of Commons in Canada.

…A bill just passed the House of Commons that — barring shockingly unforeseen resistance in the Senate, which already voted to loosen the rules — will radically expand eligibility for euthanasia in Canada, including the following provisions:

The expansion will eventually continue to allowing people diagnosed with dementia to order themselves killed in an advance directive when they become mentally incompetent and to pediatric euthanasia of “mature minors” — both among the subjects likely to be “studied” by a committee of “experts” over the next two years, meaning they are coming next.

Disability-rights activists fought back furiously and backed a filibuster over the bill that succeeded for a time. But it was eventually broken by the ruling minority Liberals and Bloc Québécois.

The despair of people with disabilities on Twitter after the vote was visceral, with some noting that Canada does not guarantee life with dignity — with say, independent living services — but will guarantee “death with dignity” when the paucity of services leads to a suicidal desire. They feel, rationally, like targets rather than beneficiaries.

It is also worth noting that only 15 percent of Canadians have access to quality palliative care. Not to worry, the panel of experts will “study” that too. Good grief.

This is frightening. It should also be taken as a warning to America–if healthcare is ever run by the government, not only will the quality of care decrease, the availability of care will also decrease. There will come a time when disabled or elderly Americans will not be able to obtain even the minimal care that they need, and there will be attempts made to persuade them to take advantage of assisted suicide. That has been happening for years in the Netherlands. We don’t need to bring it here.

The death of Breonna Taylor is tragic. The fact that there is rioting by people who either don’t know the truth or don’t care about the truth is even more tragic. 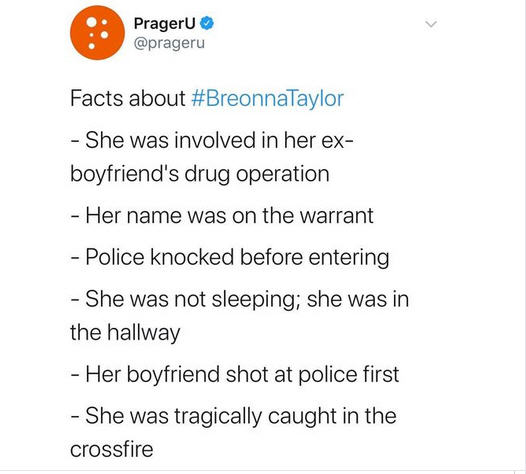 Andrew McCarthy posted an article at The National Review today that illustrates some of the facts of the Breonna Taylor case.

The criminal law is not designed to address every human tragedy. That is the lesson of the tragic death of Breonna Taylor. It was also the theme repeatedly struck by Kentucky attorney general Daniel Cameron on Wednesday, in announcing the indictment of one of the three officers involved in the raid that lead to her death.

The article provides some background of the incident:

Much of what we’ve been told about the case turns out not to be true — another “Hands Up, Don’t Shoot” urban legend of police brutality. Most prominently, Attorney General Cameron explained that the police did not execute a “no knock” warrant before entering Ms. Taylor’s apartment. They knocked and announced themselves as police before forcing entry shortly after midnight.

How they came to be at Ms. Taylor’s home, with a search warrant based on probable cause that evidence of narcotics crimes would be found, is the part of the story the social-justice warriors would have us omit. It needs telling.

When she was killed, Breonna Taylor was 26, a hospital emergency-room technician who hoped to become a nurse. But over the years, she had gotten involved with Glover, a 30-year-old twice-convicted drug dealer. Though she was never a targeted suspect, the New York Times reports that Ms. Taylor was entangled in the frequent police investigations of Glover. Taylor remained romantically involved with him though he had spent years in prison.

Meantime, Hankison [Brett Hankison, then a detective (since fired)], who was in the parking lot outside the apartment, began firing when the commotion he could not have seen began. He sprayed the patio and a window with ten bullets — irresponsibly, to be sure, but fortunately without harming anyone. Hankison, who had a spotty disciplinary record in almost 20 years as a cop, was terminated when police officials judged that his conduct during the raid shocked the conscience.

And now he has been charged, which seems appropriate. What the mob wants, though, is murder charges against the two cops who shot Ms. Taylor. There is no conceivable legal justification for that. The police were properly executing a lawful warrant. There appears to have been more than adequate probable cause for the search in light of Glover’s ties to the apartment. Even if there were any doubt about that, the warrant had been duly authorized and therefore police were entitled to rely on it. And they were fired upon before reasonably responding with lethal force.

What happened to Breonna Taylor was a calamity. That is why the city of Louisville just paid $12 million dollars to settle the wrongful death lawsuit her family filed, rather than trying to fight it. Obviously, the money cannot bring her back to life, and will never be adequate compensation for her loved ones’ loss. But that could also have been said for the politicized filing of unprovable homicide charges. The legal system can only do the best it can; it cannot fully compensate for tragic loss, and its criminal processes are not equipped to address catastrophes that are not crimes.

The state of Kentucky was right not to opt for mob justice. Unfortunately, the mob has a different conception of “justice,” and it is ripping the country apart.

The shooting of this young woman is a tragedy. So are the lies and violence currently surrounding her death.