Today, The National Review reported that President Biden announced that he would be forgiving the student loans of many Americans.

President Joe Biden is set to “forgive” up to $10,000 in federal student debt for those making under $125,000 annually, and $20,000 for Pell grant recipients, transferring the cost of the loans to the American public, the White House announced Wednesday.

…Biden is also set to extend the federal student loan freeze for a final time until December 31.

Lawmakers, including Nancy Pelosi, have argued that Biden’s executive order, is unconstitutional and goes outside the rights of the executive branch.

Congress, not the president, is the only body that can cancel student debt, Pelosi said in July of 2021, arguing that “the president can’t do it.”

“Not everybody realizes that, but the president can only postpone, delay but not forgive” student loans, she added.

The Department of Education came to the same decision, arguing that the executive branch “does not have the statutory authority to cancel, compromise, discharge, or forgive, on a blanket or mass basis, principal balances of student loans, and/or to materially modify the repayment amounts or terms thereof.”

The total estimated cost for Biden’s one-time cancellation is $300 billion, according to a study released Tuesday by the Wharton School of business at the University of Pennsylvania. The cost would increase to $330 billion if the program continues over the standard ten-year window, the study showed.

Republican lawmakers have sounded the alarm over Biden’s decision, saying that it will lead to inflation.

Payments for most student loan borrowers have been stalled since March of 2020, when Congress, and then former president Donald Trump, paused the payments due to predicted financial hardships stemming from the Covid-19 pandemic. Biden has extended the pause four times, and the freeze was expected to expire on August 31.

For once I agree with Nancy Pelosi. The President does not have the power to forgive student loans.

In December 2016, The Wall Street Journal reported the following:

To help pay for ObamaCare, Democrats simultaneously federalized the student loan market and projected fictitious savings, all while adding more than $1.2 trillion to the federal balance sheet. The amount keeps increasing like the debt clock. Liberals then cited the government “savings” to peddle the fallacy that the feds make money off student loans—a pretext they then used to sweeten debt forgiveness plans that have helped keep default rates artificially low.

The Education Department claims the national student loan default rate is 11.3%, yet only half of all debt is in repayment. Borrowers can seek forbearance or deferment if they are unemployed, return to school or claim financial difficulties. Or they can enroll in income-based repayment plans that let them discharge the debt after making payments equal to 10% of their discretionary income for 20 years. Those who work in “public service”—government or a nonprofit—can wipe out their debt in 10 years without a tax penalty.

Initially, only students who borrowed in 2014 or later were eligible for these generous loan forgiveness plans. Then President Obama retroactively extended the benefits to buy millennial votes. Over the last three years the share of outstanding federal direct loan dollars in income-based repayment plans has doubled to 40%. Costs have exploded.

Students signed a contract to repay those laws. By switching the college loans from private lenders to the government, the government acquired the power to interfere in that contract. However, the House of Representatives has the ‘power of the purse’–not the President.

I wonder if the people whose loans are forgiven will see through this effort to buy votes or if they will simply vote for Democrats because their loans were forgiven.

Investor’s Business Daily posted an article about what has happened to student loans under the Obama Administration. 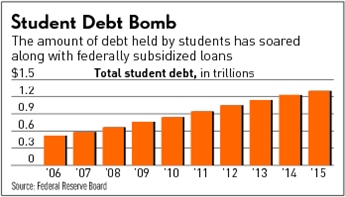 The Obama Administration took over the student loan program in 2010.

In a nutshell, federal loan aid to colleges is pushing up tuition faster than inflation. Students must take out ever higher amounts of debt to pay for their education, but starting salaries haven’t kept up. If students don’t get good jobs when they graduate, many will default.

The study, published by the National Bureau of Economic Research, shows conclusively that growth in one program — the Federal Student Loan Program — was more than enough to account for the entire rise in college tuition from 1987 to 2010 — a stunning conclusion that suggests a massive market failure.

From 2006 to today, total student loan debt soared from $517 billion to $1.3 trillion, a 152% jump, to cover surging tuition costs. Over that same period, real starting wages for college grads were essentially flat.

Sadly, this should be no surprise, given recent history.

Whenever government gets involved in subsidizing anything — from sugar to home mortgages — higher prices emerge, leading to market disruptions and, often, a “crisis.”

At some point, we need to realize that the private sector does a better job at everything than the government. The bubble of the student loan debt will be bailed out by the taxpayers, and the national debt will continue to spiral out of control. This is our future unless we begin to elect people who understand both human nature and free markets.