One of the many contentious battles that President Trump has had to fight was the battle to erect a border wall. A large part of that wall has been built, and there are consequences. Today The Washington Examiner posted an article about some of the impact of that wall.

Border Patrol agents who work in the Pacific Ocean off the southern coast of California saw a dramatic increase in the number of arrests made over the past 12 months, an indication that the addition of new border wall in the region since 2017 is prompting smugglers to find new ways to move people and drugs into the United States.

“Over the past year, within 2020, we’ve had a record number of marine interdictions, including pangas [small, fast boats], jet skis, swimmers, and paddle boaters,” Border Patrol San Diego Chief Patrol Agent Aaron Heitke told the Washington Examiner during a land and sea tour. “The wall structure itself is solidifying the land border, and it’s forcing the smugglers to come out into the maritime environment.”

Agents, using jet skis and boats to patrol the 20-mile stretch from Chula Vista at the border up past downtown San Diego, made 302 interdictions in fiscal 2020, which ran from Oct. 1, 2019, through Sept. 30, compared to 195 the previous year and 88 in 2015. One such incident resulted in the seizure of a small boat that was loaded with more than 3,000 pounds of methamphetamine.

Border Patrol’s San Diego region has seen 53 miles of border wall added to its 60-mile area of responsibility, including the duplicate fencing. A small portion of the new wall was completed with funding from the final year of the Obama administration, but most was funded in federal budgets passed during the Trump administration. The foundation of the double-layer fencing goes up to 10 feet below the ground, preventing people from digging shallow tunnels into the U.S., as was possible with the Clinton-era metal scraps. It stretches from 18 feet to 30 feet tall and is comprised of steel fence posts filled with concrete and rebar. It starts at the coast and goes up into the mountains in Otay Mesa, California, significantly further than the scrap metal that was taken out. Construction teams are in the process of completing the wall over the mountains, a seemingly impossible task for how steep the terrain is here.

Agents in San Diego said this new wall and the technology that comes with it will be hard to get past for most people and will funnel others to areas where agents are present because they have been freed up to focus on less secure areas as a result of the new wall. Those who do attempt to climb over the wall will be better detected thanks to new cameras, sensors, radar systems, and underground fiber optic systems.

Border Patrol officials had expected smugglers to try new approaches, including taking to the water. Heitke said smugglers who do choose to go the boat route are being tracked, oftentimes by the cellphone they leave behind in a boat or when it is seized after they are arrested.

“The smuggler has a phone with them,” said Heitke. “We can dump the information on the phone and find the routes saying where they’re going, and we’re able to see an enormous range of travel, whether they go out 50 miles or 100 miles out, whether [they] go up 50 or 100 miles to land.”

How many drug overdoses have been prevented because President Trump fought Congress to build a wall?

Breitbart posted some leaked photos of what is currently happening on our southern border. This is one of the photos: 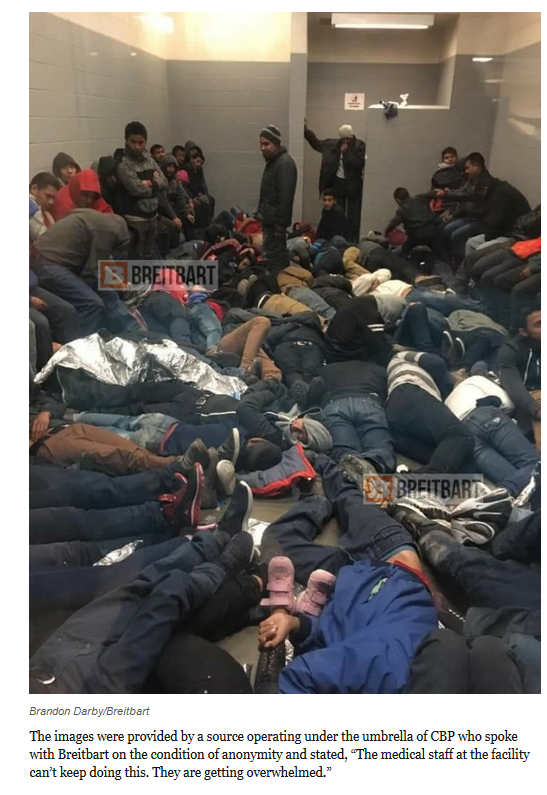 Another source operating under the umbrella of CBP spoke with Breitbart under the same conditions and stated, “This is no different than what we were dealing with during the Obama Administration. This is happening in the Rio Grande Valley Sector, the Del Rio Sector, the El Paso Sector, the Tucson Sector, the Yuma Sector, and the San Diego Sector. It’s almost across the entire Southwest border that we are being overwhelmed by migrant families.” The source added, “We are basically facilitating Mexican cartels’ migrant smuggling operations into the interior of America. We are babysitting and not securing our border. The flow shows no signs of abating and it keeps increasing.”

We desperately need to secure the border.

President Trump made a very generous offer to the Democrats in the House of Representatives today regarding border security on our southern border. Unfortunately it is a pretty safe bet that they will turn down the offer. So exactly what is at stake?

On January 7th Christopher Holton posted an article at The Center For Security Policy about the security threat on our southern border. It is a rather detailed article, and I suggest that you follow the link above and read the entire article.

Here are some of the highlights:

For instance in May 2001, former Mexican National security adviser and ambassador to the United Nations, Adolfo Aguilar Zinser, reported, that ‘Islamic terrorist groups are using Mexico as a refuge.’

There is no way to estimate how many jihadists may already have crossed into the U.S. from Mexico. But the time to play politics with the border issue is long past. The shallow sloganeering and race-baiting that have dominated the national debate about border controls should be recognized as what they are: hindrances to sane and sensible national defense measures.

…Mexicans trying to enter the U.S. illegally are often simply processed at the border and sent back. But Mexico won’t allow us to send citizens from other countries back through Mexico, and under U.S. law, they’re entitled to a formal deportation hearing. The immigration service lacks beds to hold them, so the vast majority of OTMs are released from custody and asked to voluntarily return for their court date.

…The intrepid Todd Bensman of the excellent Center for Immigration Studies (CIS) has provided the highlights of that report’s findings:

• The U.S. Department of Homeland Security continues to prioritize the SIA threat as one of the top threats to the homeland because of the consistently “large number” of individuals from special interest countries that travel to the Western Hemisphere using illicit pathways.

• Statistics on the number of known or suspected terrorists on routes to the border are often classified, but the threat posed by “the existence of illicit pathways into the United States” highlights that “border security is national security” as terrorist groups seek to exploit vulnerabilities among neighboring countries to fund, support, and commit attacks against the homeland.

• The report lists five open-source, unclassified cases representing the types of individuals and threats associated with illicit routes to the homeland. (CIS recently compiled and published a list of 15.) A number of heavily redacted cases are included in which biometric enrollment information uncovered suspected terrorists in 2013, 2015, and 2018.

• The frequency of international flights from special interest regions into Latin America and the Caribbean continues to increase due to economic and governance challenges in those countries that create an attractive environment for illicit SIA travel to the U.S. border.

• The United States-Canada border “is also susceptible to exploitation by SIAs.”

It’s time for the politicians in Washington to stop fooling around and secure the border. The next terrorist attack in America will be on their hands.

The Washington Examiner is reporting today that U.S. Customs and Border Protection seized 52 bales of cocaine near Puerto Rico and the U.S. Virgin Islands last week. The street value of the cocaine is roughly $30 million.

CBP officials said Puerto Rico is becoming an attractive smuggling route this year for cocaine and heroin headed for the United States. In 2017, CBP seized nearly 66,000 pounds of drugs in and around Puerto Rico, more than any prior year on record.

“Drug trafficking organizations have always sought to use the Caribbean as a route to smuggle both narcotics and migrants. The logistics to do so are intrinsically more complicated than traversing the southwest border,” Jeffrey Quinones, a spokesman for CBP’s Puerto Rico and Virgin Island outposts, told the Washington Examiner. “Nonetheless, we have seen cyclical increases in the quantity of narcotics brought to these islands and a diversity of means to conceal and enter the product.”

This illustrates the need to have secure borders surrounding our nation. Obviously these drugs would not be smuggled in unless Americans were using them, but the fact remains that the flow of drugs needs to be stopped. At that point we will have a much better chance of helping those addicted.

Hot Air is reporting today that the Midland, Mich.-based Mackinac Center has released a report stating that in 2011 New York had the highest cigarette smuggling rate in America. In 2006, when the cigarette tax was $1.50 a pack, New York was the fifth highest. In 2008, the tax went to $2.75 a pack, in 2010 it went to $4.35 a pack. That increase was enough to move New York from fifth place to first place in the number of cigarettes smuggled into the state. It is now estimated that 60.9 percent of all cigarettes smoked in New York are not taxed there!

What can we learn from this? Simple. People don’t like to pay taxes and will do almost anything to avoid them. Some state is making money on the sale of these cigarettes–it’s just not New York. New Hampshire seems to be where most of the smuggled cigarettes are coming from–New Hampshire does tax cigarettes, but only $1.68 a pack. I suspect New Hampshire collects more revenue from its lower tax than New York does from its higher tax. Maybe we could learn from that.