Yesterday John Hinderaker at Power Line posted an article about a recent tweet from Jim Acosta.

The sad scene he was referring to was probably not Americans at their best, but it was real–it was people protesting the false reporting of CNN. Mr. Acosta seems to have forgotten the actual incidents of Trump supporters being abused. The article at Power Line cites a number of these incidents. However, I believe the most egregious incident is a statement by Representative Maxine Waters to a group of supporters.

According to CNN, Ms. Waters said:

“Let’s make sure we show up wherever we have to show up. And if you see anybody from that Cabinet in a restaurant, in a department store, at a gasoline station, you get out and you create a crowd. And you push back on them. And you tell them they’re not welcome anymore, anywhere…”

Again, I don’t necessarily approve of the way Mr. Acosta was treated, but it was tame compared to being confronted with an angry mob when you are taking your family out to dinner. Mr. Acosta needs to clean up his own back yard before he attacks anyone else.

“If you see anybody from (Trump’s) cabinet in a restaurant, in a department store, at a gasoline station, you get out and you create a crowd, and you push back on them, and you tell them they’re not welcome anymore, anywhere.”

It is no secret that the Democrats would like to overturn the 2016 election. Representative Maxine Waters has been running around the country yelling, “Impeach 45″ for a while now. There are also some very uneducated Americans who believe that if President Trump were to be impeached, Hillary Clinton would become President. The ignorance of Americans regarding the U.S. Constitution is a whole other article that would take more pages than I can imagine.

At any rate, what would happen if the Democrats were to take the House and the Senate in 2018.

A Forbes article from March 2018 lists the changes the Democrats want to make in the tax plan:

This is not only a tax on the wealthy, but it is a tax on small business–the main creator of jobs in America. This would begin to slow down the economic growth we have seen under President Trump.

Increase the corporate income tax rate from 21 percent to 25 percent.

American corporations compete on the world market. Before this tax cut, America had the highest corporate tax rate in the world. The rate cut under President Trump puts us in the middle of the pack. To undo this would slow economic growth and job creation in America.

Bring back the alternative minimum tax (AMT) for 4 million families.

This is a tax that hits two-income families in states with a high cost of living–New York, New Jersey, Connecticut, Massachusetts, etc. Oddly enough, these are the states that generally vote Democratic–these voters who vote Democratic in these states are voting against their own interests.

Cut the “death tax” standard deduction in half.

This is a tax that hits small business and family farms. Again, it hits those least likely to afford it and hurts the continuing growth of business.

The other part of the possible Democratic takeover of Congress would be the impeachment of President Trump. This would further divide the country. It would also set the precedent that political use of government agencies against the opposing party is acceptable and can be successful. That would not bode well for the future of America.

I can guarantee that a Democratic mid-term victory would be the end of America as we know it. Political speech that does not agree with those in power will be labeled ‘hate speech.’ Those who publicly voice unacceptable opinions will be subject to harassment by an out-of-control government. We will see censorship of alternative news sources, and the American public will only have access to the news those in power want them to have access to.

A cautionary note to Democrats planning impeachment–remember what happened to the Republican party majority after they attempted to impeach President Clinton. The American people still vote, and they have a sense of fairness. It is very hard to watch the continuing attacks on President Trump and believe that the way the media treats him is fair.

On Sunday, Lifezette posted an article about Senator Elizabeth Warren‘s plan to obstruct the firing of U.S. Attorneys. Evidently Senator Warren has a short memory. Yesterday, The Gateway Pundit posted an article quoting California Democrat Representative Maxine Waters complaining that Barack Obama did not get rid of Bush-era U.S. Attorneys fast enough in May of 2009.

Maxine Waters: “As we understand it, the protocol has been that U.S. attorneys hand in their resignations and would give the new administration an opportunity to make new appointments, we don’t see that happening quite fast enough.” 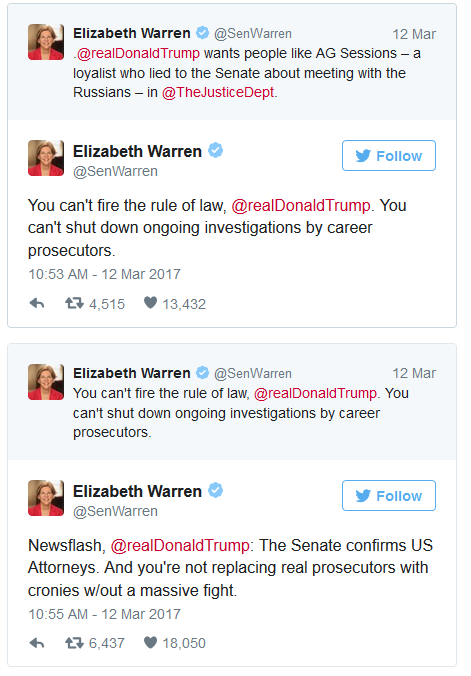 While it is true that the Senate confirms any U.S. attorney appointees that a president names, neither the act of firing nor the appointment of replacements is something unusual in the transfer of presidential power.

I guess Senator Warren has forgotten recent history. Please follow the link to read the entire Lifezette article. Senator Warren’s tweets are totally over the top.