It is troubling that someone on the House Intelligence Committee was in bed (literally) with a Chinese Communist Party spy. It is even more troubling that those in the House leadership on the Democrat side chose to keep that information secret.

The Conservative Treehouse posted an article yesterday about one disturbing aspect of this situation.

….. As noted in this interview segment Nancy Pelosi is claiming she was briefed on the Chinese spy compromise around Swalwell with McCarthy. However, simultaneously House Leader Kevin McCarthy states he found out through the media. Keep in mind McCarthy has only been part of the ‘Gang of Eight’ since Jan 2019 (he as minority leader and Pelosi taking over from Paul Ryan as House Speaker).

A Pelosi briefing prior to 2019 was in her role as Minority leader with Ryan as speaker (Nunes/Schiff as Chair/Ranking on HPSCI). Therefore either Pelosi was briefed outside the Go8 structure, or she is lying about briefing with McCarthy. While Pelosi is a notorious liar, the former explanation of a defensive briefing seems more likely.

That means U.S. intelligence officials during the Obama administration kept the Swalwell compromise secret and outside the Gang-of-Eight. Accepting that reality is further evidence the U.S. intel apparatus -writ large- was operating through the prism of politics.

This is yet another illustration of how the deep state works–they are willing to compromise national security in order to do anything that reflects negatively on one of their own.

Lawmakers are asking Democratic leadership in the House of Representatives to remove Rep. Eric Swalwell (D-Calif.) from a powerful committee after his alleged ties to a Chinese spy were reported this week.

“Remember what Swalwell said. He accused the president of everything that he did, by lying to the American public and sitting on the Intel Committee,” McCarthy said on Fox News’ “The Ingraham Angle.”

Swalwell, a onetime Democratic presidential candidate, sits on the House Intelligence Committee, raising concerns about whether he’s compromised because of the alleged links to the spy.

A Pelosi spokesperson said in a statement to news outlets, “The Speaker has full confidence in Congressman Swalwell’s service in the Congress and on the Intelligence Committee.”

“As a Member of the House Select Committee on Intelligence, Rep Swalwell has access to highly classified national security material. Swalwell has been compromised by at least one China Communist Party operative. He must be removed from HPSCI immediately,” Rep. Rick Crawford (R-Ark.) added.

Sen. Lindsey Graham (R-S.C.), the Senate Judiciary chairman, said the report “Shows extremely bad judgement and rank hypocrisy on the part of Congressman Swalwell who led the charge in the Russia Hoax and impeachment.”

It also showed a “double standard” in defensive briefings from the FBI, which allegedly gave one to Swalwell about Fang but neglected to give one about President Donald Trump regarding Russia, Graham asserted.

“Democrats get defensive briefings when there are concerns about foreign influence, but when it came to President @realDonaldTrump they used a counter-intelligence investigation to spy on his campaign,” he wrote in a tweet.

At best we can say the Swalwell exercised very bad judgement in his personal conduct. This is the man who repeatedly accused President Trump of being a Russian agent. Doesn’t that sound like something China might encourage an American political leader to say in order to take the focus off of their own espionage activities? Knowingly or unknowingly, Swalwell has been spouting Chinese propaganda in recent years. Shouldn’t he be held accountable?

In early November, a Maryland man was killed as police tried to confiscate his guns under a ‘red flag’ order (story here). Obviously the man’s response to the police was unwise, but when you boil the whole story down, the man was killed because he resisted when police came to take his guns. That is chilling.

Democratic California Rep. Eric Swalwell suggested on Friday that the U.S. government could use nuclear weapons on its own citizens if they fight back against firearm confiscation.

Right-wing internet personality Joe Biggs tweeted at Swalwell in response to a May report that Swalwell wants to ban “military-style semiautomatic assault weapons” and prosecute gun owners who did not turn in their newly-banned weapons.

Biggs promised any such legislation would provoke a “war” between gun owners and the government, writing, “You’re outta your f*****g mind if you think I’ll give up my rights and give the gov [sic] all the power.”

He further threatened that the nukes are “legit.”

The last sentence in the article states:

Swalwell said in August that he would consider a 2020 presidential run after the 2018 midterm elections.

This is what a threat to the Second Amendment looks like.

Yesterday The Daily Caller posted an article about an attack on Rudy Peters, the Republican nominee in California’s 15th Congressional District. CNN has not yet reported this attack.

Farzad Fazeli, 35, allegedly made disparaging remarks about the Republican Party before pulling out a switchblade and attempting to stab Rudy Peters at a festival Sunday, according to the Alameda County Sheriff’s Office.

Peters is the Republican nominee in California’s 15th Congressional District, where he is challenging incumbent Democratic Rep. Eric Swalwell.

The sheriff’s office arrested Fazeli on Tuesday and announced it to the public that afternoon.

This is not acceptable. I realize that political passions are running high at this time, but supporters of all candidates need to act with civility. There is no excuse for this sort of attack on a political candidate. Hopefully the attacker will spend significant time in jail in order to deter others from committing similar attacks.

The Washington establishment does not like the fact that the swamp is slowly being drained. The establishment has acquired wealth and power in the current swamp and does not want to give it up. How many millionaires in Congress entered ‘public service’ as middle class Americans and are now millionaires? How many have taken advantage of knowing about upcoming legislation in order to increase their stock portfolios? How many of them are engaging in activities that they do not want revealed to the public? I realize that there are a few honest men and women in Congress, but I suspect it is only a few. So what happens when they begin to see the draining of the swamp?

The Hill posted an article yesterday that included the following tweet addressed to President Trump in response to the firing of Andrew McCabe: 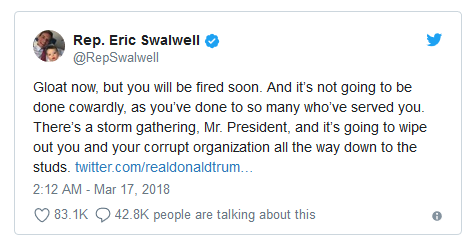 Can you imaging this lack of civility directed at any other President? This is a prime example of why Democrats (and establishment Republicans) need to be defeated in order for the swamp to be fully drained.

We need to remember that Andrew McCabe was fired as a result of an internal investigation at the FBI. President Trump was not responsible for the firing of Andrew McCabe, although I am sure he supported it. McCabe was guilty of lying to the FBI under oath and leaking information. Either one of these offenses is enough to get you fired from the FBI. If Representative Swalwell supports equal justice under the law, he should be supporting the firing of Andrew McCabe–not threatening President Trump.