On Saturday, The New York Post posted a copy of a letter sent to President Clinton on February 11, 1999. The letter is quoted in the article, please follow the link to read it.

This is a screenshot of the letter: 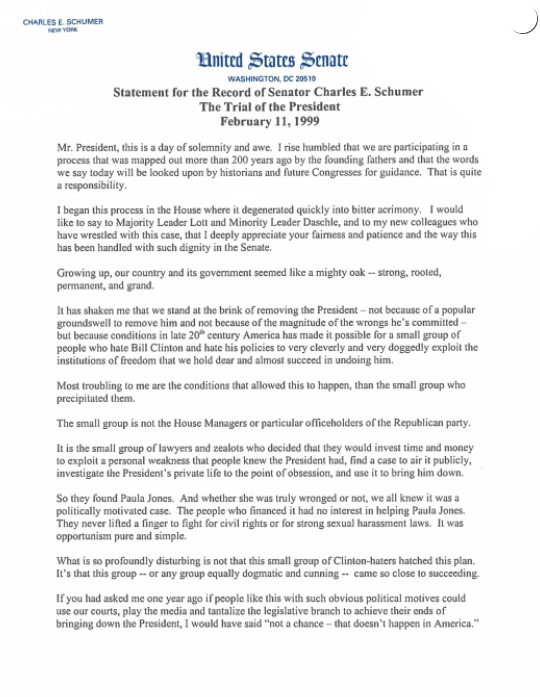 My how things have changed.

This is a video everyone who has bought into the lies the media has told about President Trump’s stand on immigration needs to watch.

You can tell a lot about what is going on in the House of Representatives by the committee assignments. Based on the assignments being given out now, this is going to be a very ugly year. We have already seen two news stories in the past week that were an indication that facts don’t matter. We are going to see many more of those stories in the near future; and those stories, whether true or false, will be the excuse for the Democrats to begin impeachment proceedings against President Trump in the House of Representatives. The Democrats would do well to remember what happened to the Republicans after they tried to impeach President Clinton. What the Democrats need in order to avoid paying a heavy penalty for this move is to get President Trump’s approval ratings below 30 percent. They were able to do that with previous Republican presidents, but President Trump keeps fighting back (and the economy is providing jobs for people who might otherwise be disgruntled).

Yesterday Politico posted an article detailing some of the committee assignments that are relevant to the impeachment process.

The House Oversight Committee is adding a group of progressive flamethrowers to its ranks.

…The new members, all of whom are freshmen except Khanna, have been critical of President Donald Trump, and their addition to the committee comes as Democrats have pledged to launch wide-ranging investigations into the president and his administration.

Tlaib drew swift backlash when she vowed to “impeach the motherf—er,” referring to Trump. Republicans have discussed a censure for Tlaib for railing against Trump.

Not only did the Democrats not chastise Representative Tlaib–they rewarded her behavior!

“If I based the choices going on the committee based on what people said or their reputations or whatever, I probably wouldn’t have a committee,” Cummings told POLITICO. “I am excited — there were a lot of people that wanted to come on our committee.”

…Rep. Dan Kildee, a member of the Democratic steering panel, said he was excited about the progressive picks.

“I want people to be aggressive, especially on that committee. It’s good to have people who aren’t afraid,” the Michigan Democrat said in an interview. “They’re going to be dealing with some pretty important stuff.”

The Democrats are continuing their effort to bring down a duly-elected President and totally undermine our representative republic instead of actually passing laws that will continue our strong economic growth. How sad.

It is no secret that the Democrats would like to overturn the 2016 election. Representative Maxine Waters has been running around the country yelling, “Impeach 45″ for a while now. There are also some very uneducated Americans who believe that if President Trump were to be impeached, Hillary Clinton would become President. The ignorance of Americans regarding the U.S. Constitution is a whole other article that would take more pages than I can imagine.

At any rate, what would happen if the Democrats were to take the House and the Senate in 2018.

A Forbes article from March 2018 lists the changes the Democrats want to make in the tax plan:

This is not only a tax on the wealthy, but it is a tax on small business–the main creator of jobs in America. This would begin to slow down the economic growth we have seen under President Trump.

Increase the corporate income tax rate from 21 percent to 25 percent.

American corporations compete on the world market. Before this tax cut, America had the highest corporate tax rate in the world. The rate cut under President Trump puts us in the middle of the pack. To undo this would slow economic growth and job creation in America.

Bring back the alternative minimum tax (AMT) for 4 million families.

This is a tax that hits two-income families in states with a high cost of living–New York, New Jersey, Connecticut, Massachusetts, etc. Oddly enough, these are the states that generally vote Democratic–these voters who vote Democratic in these states are voting against their own interests.

Cut the “death tax” standard deduction in half.

This is a tax that hits small business and family farms. Again, it hits those least likely to afford it and hurts the continuing growth of business.

The other part of the possible Democratic takeover of Congress would be the impeachment of President Trump. This would further divide the country. It would also set the precedent that political use of government agencies against the opposing party is acceptable and can be successful. That would not bode well for the future of America.

I can guarantee that a Democratic mid-term victory would be the end of America as we know it. Political speech that does not agree with those in power will be labeled ‘hate speech.’ Those who publicly voice unacceptable opinions will be subject to harassment by an out-of-control government. We will see censorship of alternative news sources, and the American public will only have access to the news those in power want them to have access to.

A cautionary note to Democrats planning impeachment–remember what happened to the Republican party majority after they attempted to impeach President Clinton. The American people still vote, and they have a sense of fairness. It is very hard to watch the continuing attacks on President Trump and believe that the way the media treats him is fair.

Joel C. Rosenberg posted an article on his blog yesterday detailing the history behind the current crisis with North Korea. The article asks the question, “How did we get to the point that Pyongyang may have 60 warheads?” That is certainly a very valid question.

Here are some of the highlights of the history reported in the article:

In October of 1994, President Bill Clinton cut a deal with North Korea in which Pyongyang agreed to “freeze and gradually dismantle its nuclear weapons development program,” reported the New York Times.

“This agreement will help achieve a longstanding and vital American objective — an end to the threat of nuclear proliferation on the Korean Peninsula,” Mr. Clinton told the American people.

“This agreement is good for the United States, good for our allies, and good for the safety of the entire world,” Mr. Clinton added. “It’s a crucial step toward drawing North Korea into the global community.”

“This is a good deal for the United States,” Mr. Clinton said at the time. “North Korea will freeze and then dismantle its nuclear program. South Korea and our other allies will be better protected. The entire world will be safer as we slow the spread of nuclear weapons.”

Obviously, North Korea chose not to honor its end of the bargain. President Clinton would have done well to follow the advice of President Reagan–“Trust, but verify.”

The article explains that President Obama’s foreign policy toward North Korea was also not successful:

In February of 2012, President Obama was similarly duped.

Mr. Obama agreed to a deal in which Pyongyang promised (again) not to build nuclear weapons and stop testing long-range ballistic missiles.

In return, the Obama administration agreed to give North Korea 240,000 metric tons of food.

Experts warned the Obama team at the time that “it is naïve at best for the administration to herald a North Korean ‘commitment to denuclearization’ after the many years of North Korean actions definitively proving the contrary.”

Less than a month later, Pyongyang tested another long-range rocket in clear violation of the agreement, and a humiliated Mr. Obama had to suspend the food aid program.

Clearly, the policy of “strategic patience” (read: “do nothing and hope for the best”) run by Mr. Obama and then-Secretary of State Hillary Clinton has been a colossal failure.

If all this weren’t bad enough, it’s made worse by the fact that the insane Obama nuclear deal with Iran was essentially patterned — and sold — after the Clinton deal with North Korea. As I warned in this Fox News interview and elsewhere (see here and here), the ayatollahs in Tehran are working closely with Pyongyang on nuclear and missile technology. They’re also watching how the U.S. and the world powers handle a nation aspiring to become a nuclear armed power. So far, they’re learning the West can be played for fools, and a small but aggressive nation can build a nuclear arsenal without much fear of being stopped.

America does not want war, but we don’t want to be nuked by a third world tin-horn dictator either. It is unfortunate that Iran and North Korea have been allowed to progress as far as they have on their nuclear programs. We also need to understand that Russia and China are not innocent bystanders in this situation–both countries are not unhappy when America is put at risk. At this time we need to unite as a people behind a strong President. Otherwise, there is a good chance that this situation will escalate in the wrong direction very quickly.

As we approach the anniversary of September 11, 2001, I wanted to remember that day with something positive. There was a time in 2006 when America and Russia were at least acting like friends. The story below reflects that time. 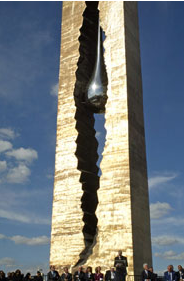 This is a picture of the Teardrop Memorial, Russia’s gift to the United States in memory of 911. The monument To the Struggle Against World Terrorism was dedicated on September 11, 2006, by President Clinton.   It is located in Bayonne, New Jersey, at a place where the twin towers were visible.   To read the entire story of the monument and how it came to rest there, please follow the link to 911monument.com.    The website tells the story of what inspired the monument and how it came to be. This is another picture of the monument.    I stumbled on this monument in an article at the American Thinker. I visited the monument a few years ago. It is a sobering sight. You stand at the foot of the monument and look across the river at lower Manhattan to where the twin towers once stood. 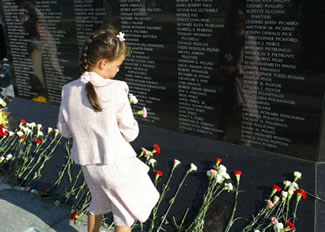