Yesterday The Epoch Times reported that Judge Carl Nichols with the U.S. District Court for the District of Columbia has ruled that the Trump administration can compel hospitals and insurers to publish negotiated costs for health care services that are normally kept secret from patients. This is wonderful news for patients in hospitals although I suspect that the medical community is not happy with the decision.

The Department of Health and Human Services (HHS) introduced a rule in November 2019 that defined “standard charges,” laid out the publication requirements for hospitals and insurers, and the department’s enforcement plans.

At the time, hospital and insurer organizations and advocacy groups objected to the agency’s proposals, disputing that the Trump administration has the authority to require the disclosures, which they believe are trade secrets. The hospitals also disputed that the policy would benefit consumers and lead to lower costs, countering that compliance would instead be too burdensome and “get in the way” of providing services for patients.

The finalization of the rule, which goes into effect January 2021, prompted the American Hospital Association (AHA) to sue, arguing that the White House didn’t have the authority to make the directive, had violated the First Amendment in its creation, and had acted in an “arbitrary and capricious” manner.

It also requires hospitals to regularly update the posted information.

David Mitchell, the founder of advocacy group Patients For Affordable Drugs, said in a statement to The Epoch Times in response to the ruling that he thinks “we have to get rid of our system in which prices are secret and hidden from those who must pay them.”

This is good news for the people who pay for hospital care.

There are a number of articles on the internet today about inflation in America.

The first, at Bloomberg.com describes the impact of inflation on the average Fourth of July celebration:

The CHART OF THE DAY shows an index tracking U.S. retail prices for seven foods commonly consumed while grilling climbed 5.1 percent in May from a year earlier to the highest ever for the month, the latest data from Bureau of Labor Statistics show.

Independence Day is the most popular time of the year for Americans to cook outdoors, according to the Hearth, Patio & Barbecue Association. The holiday falls on a Friday this year, increasing chances that revelers will keep celebrating into the weekend. Prices for ground beef are 16 percent higher than a year earlier, while ice cream climbed 1.7 percent and tomatoes soared 12 percent, government data show.

A chart at the Wall Street Journal shows what is happening to gasoline prices: 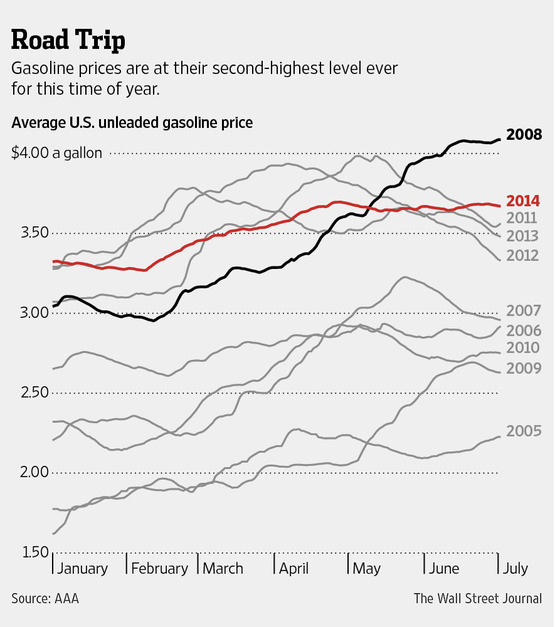 And finally, a chart at businessweek shows what happens when prices go up: 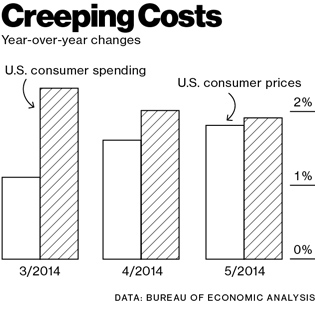 The American economy is not in recovery. The only reason the Stock Market is rising is because the government is subsidizing it. The Middle Class in America is being squeezed by a shrinking labor force and stagnant wages. We need to put more business men and less lawyers in Congress. Please remember that in November.