Yesterday The Washington Times posted an article stating what many Americans knew all along–Vice-President Mike Pence was right when he said that he has a rule never to be alone with a woman who is not his wife. Think how many recent scandals we would have avoided if Hollywood, newscasters, and politicians followed that rule.

Vice President Mike Pence was roundly ridiculed when it was revealed that he makes an effort never to be alone with a woman who is not his wife, but the policy is looking less prudish and more sensible as accusations of sexual misconduct against powerful men proliferate.

Accusations first surfaced last month against movie mogul Harvey Weinstein and have since reverberated through Hollywood, the media and government at every level. On Wednesday, Matt Lauer, a longtime host of NBC’s “Today,” and Minnesota Public Radio’s Garrison Keillor were fired by their respective organizations amid accusations of improper behavior.

Joseph Backholm, president of the Family Policy Institute of Washington, said the spate of sexual misconduct accusations makes it “increasingly obvious that we need to re-evaluate our boundaries.”

The entry of women into the workforce since World War II, followed by the sexual revolution and the erasure of well-established sexual mores, has left men and women with little guidance as to how to interact in the workplace, Mr. Richards said.

“We now find ourselves trying to kind of create rules after discovering fallout from these dramatic social changes,” Mr. Richards said. “It’s not as if Pence’s rule is written in stone; different people have different rules that are similar to this. But I know many Christian organizations and Christian ministries that have rules more or less like Mike Pence’s in place for all employees.”

In addition to guarding against infidelity and other sexual misconduct, Mr. Richards said, the Pence rule preserves the reputations of all parties involved.

“It’s as much or more about preserving the reputations of himself and other women,” he said. “A simple guardrail is absolutely reasonable if you want to prevent the rumor mill from starting, let alone even worse sexual transgressions.”

There are some obvious things that could have been done to prevent some of this and some obvious questions about the actions of some of the people involved. Why did Matt Lauer have a button under his desk that would allow him to lock the door to his dressing room without leaving his chair? Why did Harvey Weinstein conduct meetings with women in hotel rooms wearing only his bathrobe? Did their employers or the people they were accountable to know of their behavior? Was there anyone Harvey Weinstein was accountable to? Where did these men get the idea that it was okay for them to do the things they did? Did they not believe that societal norms and social graces applied to them?

Where these actions are proven, there have to be consequences. Those consequences need to be consistent in the political and the corporate world. It will be interesting to see if they are. Meanwhile, the wisdom of Vice-President Pence is apparent.

I am posting this video because I was very concerned about a report I heard on Fox News this morning. A commentator was talking about the recent firing of Matt Lauer. He also mentioned Roy Moore in his comments, making the assumption that Roy Moore was guilty. I would like to point out that Roy Moore has been a public figure for more than twenty years, and none of these charges have been previously reported. I would also like to note that none of the charges are less than thirty-five years old. I think a presumption of guilt in this case is not justified. The connections of some of Roy Moore’s accusers and their past activities further cast doubt on these accusations.

I hope this isn’t true, but I have no reason to believe that it’s a lie. Free Republic posted a story today claiming that Hillary Clinton was wearing an earpiece last night during the candidate forum.

While Clinton was fielding questions from NBC’s Matt Lauer and the public Wednesday night on live television, a quiet buzz started circulating in New York law enforcement circles about Hillary’s left ear. NYPD sources confirm Clinton was wearing an ‘inductive earpiece,’ the same technology employed by almost all lead Broadway actors to receive forgotten lines and stealth off-stage cues from directors. The flesh-colored earbud is easily concealed. There are no wires running directly to the ear like you see with the units employed by Secret Service protection detail personnel.

The skin-tone piece Clinton was wearing, however, was somewhat different from the standard issued stealth earpiece and is much different in appearance from a hearing aid. This unit is considered a “micro” earbud which contains all the technology but is a fraction of the size with a very high price tag. In fact, most of the units this size, approximately 3mm or comparable to a small pearl stud earring, are normally issued to law enforcement or corporate security teams, sources said. At a size that small, the earbud is designed to sit inside the opening of the ear canal, almost invisible to anyone. However, the unit does move and shift along with its wearer and at times can slightly pop out of the canal and require a quick readjustment, experts said.

Ironically, the revelation that Clinton was wearing such a unit might have only been recognized because of astute NYPD officers attached to her security detail who are accustomed to seeing the stealth apparatus at stage shows, conventions and security personnel of VIPs and international dignitaries at the United nations and elsewhere in the five boroughs. Likewise, NYPD detectives employ a parallel technology to communicate during undercover Ops.

Based on experts familiar with the technology, the stealth earpiece operates on a bandwidth from 300 Hz to 4KHz. Many such units are powered by SONY. The range of the unit can be unlimited depending on how the back end is set up. Technically, you could receive cues from 100 feet away or from someone sitting in Washington D.C. while you sat in New York City, experts said. The set up and range is flexible based on need and use. The unit does not require Bluetooth to operate via short distances but long range operations would require Bluetooth, which is easily configured. 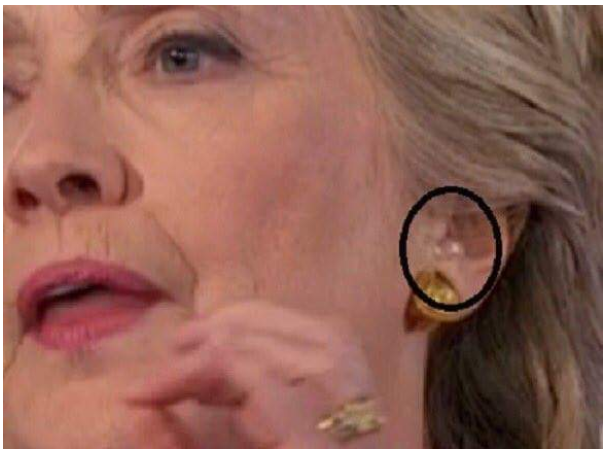 If anyone has a better explanation of what this is, please leave a comment. I would love to hear that she wasn’t cheating, but her history makes that doubtful. The really sad part is that she seems to think she can do anything dishonest that she wants and either no one will know or no one will care.