Yesterday The Gateway Pundit posted the statement by US Attorney John Durham on the Inspector General’s Report conclusions.

“I have the utmost respect for the mission of the Office of Inspector General and the comprehensive work that went into the report prepared by Mr. Horowitz and his staff. However, our investigation is not limited to developing information from within component parts of the Justice Department. Our investigation has included developing information from other persons and entities, both in the U.S. and outside of the U.S. Based on the evidence collected to date, and while our investigation is ongoing, last month we advised the Inspector General that we do not agree with some of the report’s conclusions as to predication and how the FBI case was opened,” John Durham said in a rare statement.

Remember, US Attorney John Durham has the ability to seat a Grand Jury and indict people. His report will eventually be released.

The following appeared in a post at The Gateway Pundit today: 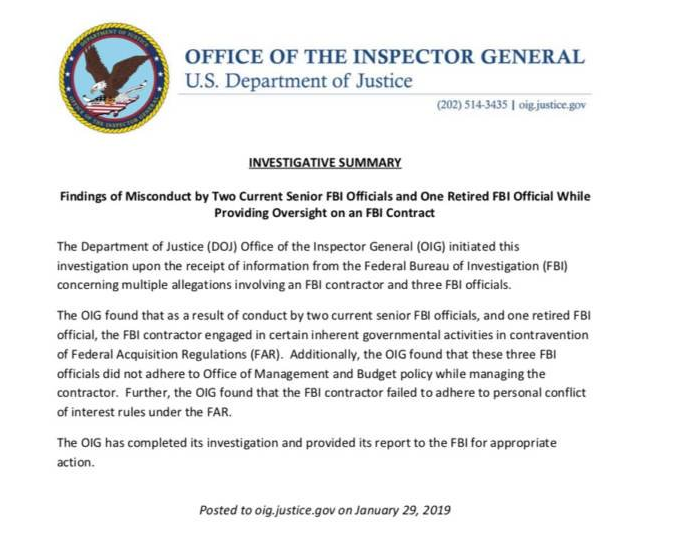 The article at The Gateway Pundit is not optimistic about the result of these findings:

The report was then provided to the FBI for appropriate action.

We’ve seen this before. No matter what type of misconduct FBI officials engage in, they will retire with a golden parachute and live happily ever after.

American citizens have completely lost trust in the FBI, the once respected premiere law enforcement agency. The agency’s reputation is in tatters because of James Comey’s corrupt directorship and the current Director, Christopher Wray has done nothing to restore confidence in the FBI.

It’s going to take some serious effort on the part of the Department of Justice to restore confidence in the FBI and the Department of Justice. It has become very obvious that both agencies used their power for political purposes during the Obama administration. It is a telling fact that after watching numerous officials in these departments lie to Congress to cover their tracks, the only person arrested was someone whose biggest crime may turn out to be his faulty memory.

John Crudele has been reporting on fraud in the Census Bureau for the past six months. His work has been posted at The New York Post website. His latest story deals with data on unemployment and inflation being falsified by a data collector named Julius Buckmon.

The article in the New York Post explains how this false data impacts the reports we hear on the news:

Because the Census Bureau’s surveys are scientific — meaning each answer, in the case of the jobless survey, carries the weight of about 5,000 households — Buckmon’s actions alone would have given inaccurate readings on the economic health of 500,000 families.

Buckmon alleged that he was told to fudge the data by higher-ups. There was no formal probe back then into what Buckmon was doing or what he was alleging, although a Census investigator — who is now under indictment for other crimes against the bureau — did question a few people.

A source told me from the start of my investigation last October that Buckmon’s actions weren’t isolated and that falsification continued in the Philadelphia office right through the 2012 presidential election, only stopping when I exposed the practice last fall.

This is not acceptable. Mr. Crudele also reports that some of the people who work for the Census Bureau are talking to the Office of Inspector General (OIG) and the House Oversight Committee about their allegations. The OIG, Oversight Committee and several others will be investigating the claims of these workers.

The story in the New York Post goes on to explain exactly how the fraud is taking place. Please follow the link to the article to learn more about how the numbers in the jobs report are being falsified.

Yesterday the Washington Examiner reported that the Office of Inspector General (OIG) has charged that the Environmental Protection Agency (EPA) violated the Buy America Act that was part of the Recovery Act. This is bureaucracy at its worst.

In March 2011, the OIG inspected the wastewater plant in Ottawa, Ill., and determined several European and Korean-made parts didn’t satisfy the Buy America Act that requires parts to be purchased or “substantially transformed” in the U.S.

The EPA for the past two years has refused to either eliminate the rule or return the stimulus funds spent on the foreign equipment, saying the purchase didn’t violate its own rules.

“In the event that the region decides to retain foreign-manufactured goods in the Ottawa project… the region should either ‘reduce the amount of the award by the cost of the steel, iron, or manufactured goods that are used in the project or . . . take enforcement or  termination action in accordance with the agency’s grants management regulations,’ the OIG said. “Neither the region nor the city agreed with our conclusion that the documentation was not sufficient to support Buy American compliance for some items.”

How many man hours did it take to reach this conclusion, how many more man hours will be spent on this before it is resolved, and what difference does it make? How about a law that says you buy the best quality for the lowest price? Wouldn’t that save taxpayers money which would put more money in taxpayers’ pockets that the taxpayers could spend to stimulate the economy?

The EPA instead blamed its Office of Water for establishing a flimsy test for whether products met the Buy America act. The agency admitted the rule isn’t a good test, but described it as “inartful” rather than wrong.

To me that sounds like a teenager explaining why it was okay to stay out past curfew!