Breitbart posted an article today about tech companies that are supporting Joe Biden for President. Their reasons won’t give the average American any reason to support them.

Twenty-four winners of the Turing Award, considered the Nobel Peace Prize for computer science, have endorsed Biden on the premise that the former vice president will allow the tech industry to import more foreign workers, specifically those on H-1B visas, to fill coveted U.S. jobs.

These companies simply do not want to pay American workers the salaries that Americans earn. When I went looking to see how much the executives listed in the article were being paid, I couldn’t find exact numbers for the companies mentioned. I did discover that six of the top ten tech company executives make over $100,000,000 a year. Much of that money is paid in stock and options awards, but that is still an awful lot of money. It seems to me that the companies would be willing to pay a fair salary to American workers rather than to import foreign workers to do jobs that Americans can do.

“Information technology is thoroughly globalized. Academic computer science departments attract talented students, many of whom immigrate and become American inventors and captains of industry,” the executives and industry insiders wrote in their endorsement of Biden:

We celebrate open source projects, the lifeblood of our field, as exemplars of international collaboration. Computer Science is at its best when its learnings and discoveries are shared freely in the spirit of progress. These core values helped make America a leader in information technology, so vital in this Information Age. Joe Biden and Kamala Harris listen to experts before setting public policy, essential when science and technology may help with many problems facing our nation today. As American computer scientists and as US citizens, we enthusiastically endorse Joe Biden for President and Kamala Harris for Vice President. [Emphasis added]

Since mass unemployment hit the U.S., spurred by the Chinese coronavirus crisis, Trump signed an executive order halting a number of visa programs including the H-1B visa. Likewise, the Trump administration is eyeing H-1B visa reforms that would more effectively weed out the business model of outsourcing that has allowed American workers to be replaced by foreign H-1B visa workers.

In August, billion dollar tech corporations such as Amazon, Apple, Facebook, and Twitter signed onto a U.S. Chamber of Commerce lawsuit against Trump’s executive order — arguing that they have a right to import foreign workers to fill U.S. jobs.

Unlike Trump, Biden has promised to increase the number of foreign H-1B visa workers that tech corporations will be able to import every year. The practice is a boon to tech executives.

There are about 650,000 H-1B visa workers in the U.S. at any given moment. Americans are often laid off in the process and forced to train their foreign replacements, as highlighted by Breitbart News. More than 85,000 Americans annually potentially lose their jobs to foreign labor through the H-1B visa program.

Analysis conducted in 2018 discovered that 71 percent of tech workers in Silicon Valley, California, are foreign-born, while the tech industry in the San Francisco, Oakland, and Hayward area is made up of 50 percent foreign-born tech workers. Up to 99 percent of H-1B visa workers imported by the top eight outsourcing firms are from India.

Bernie Sanders is not the Democrat presidential candidate. He might have been, but the Democrat political establishment has blocked his nomination twice with backroom deals. However, the proposed party platform seems to have a lot of his ideas included. The Democrats blocked his nomination because they felt that his ideas were too far out of the mainstream for him to be elected, so now they are sneaking his ideas into a platform that very few people will actually read. Yesterday Breitbart posted an article about that platform.

The proposed Democrat platform would expand asylum for migrants arriving at the U.S.-Mexico border, freeing them into the interior of the nation while they await their hearings. Gallup research from 2018 finds that nearly 160 million migrants around the world would move to the U.S. if given the opportunity — five million of which are located in Central America.

The plan also calls for:

The massive expansion of illegal and legal immigration — in addition to the hundreds of thousands of illegal aliens and more than 2.5 million legal immigrants and foreign workers added to the U.S. population every year — would come as more than 35 million Americans are unemployed or underemployed.

This is not a recipe for American success. This is a recipe for creating a permanent underclass of people who will be forever dependent on the government and eventually bankrupt the country (see Cloward-Piven Strategy). Every illegal alien that enters the country depresses the wages of Americans in low-skilled jobs. A country needs to have control of its borders in order to protect the rights and futures of those who live there.

Who is writing the Democratic Party platform, and what is their goal?

The economic recovery under President Obama has been weak. The Heritage Foundation posted the following graph of our unemployment situation: 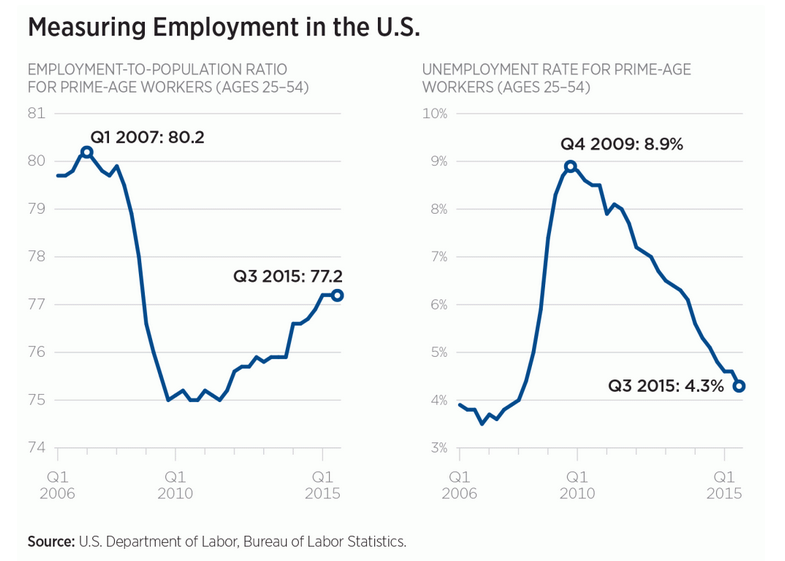 That tells part of the story, but there is another part that is not being widely told. The Washington Free Beacon posted a story yesterday showing that more foreign workers are employed in America than Americans. That is not encouraging news.

A record-high average of 24,963,000 foreign-born workers were employed in the United States in 2015, according to data released Thursday by the Bureau of Labor Statistics.

According to the bureau, foreign-born individuals include legally admitted immigrants, refugees, temporary residents such as students and temporary workers, and undocumented immigrants.

The bureau began recording this data in 2002. At that time, there were nearly 19 million foreign-born workers employed in the United States. The number has increased by 31.4 percent since then.

So what is the solution? One thing that might help would be to link the number of visas available to foreign-born workers to the number of jobs available. I have no objection to a legal alien working in America as long as he is not taking a job away from an American. Disney is the poster child for replacing American workers with foreign workers (see article in the Orlando Sentinel).

Meanwhile, until the American people stand up to our government and ask them to limit the number of foreign-worker visas so that it corresponds to the jobs available, Americans will be out of work. Corporations have lobbyists, and those lobbyists strongly encourage Congress to allow more foreign workers in so that corporations can cut their cost of doing business. That is why no one has closed our southern border–corporations make more money by hiring illegal aliens as workers. Until we have someone in Washington in power who is not bought and sold by corporate interests, we will not have a secure southern border and American workers will not be secure in their jobs.