The Conservative Treehouse posted an article yesterday about a very interesting television interview of Jim Jordan by Margaret Brennan.

Representative Jim Jordan appears on CBS Face The Nation to discuss the ongoing impeachment fiasco. Ms. Brennan struggles to define a new journalistic concept for “first-hand” information as she claims David Holmes, who claims to have overheard half of a phone conversation that two other people were having, is a “first-hand” witness.

Jordan points out that Ms. Brennan is quoting from a seal(ed) transcript given to her by Adam Schiff that has not been released.

The video and the transcript are posted in the article. You can follow the link above to see them both.

It’s also interesting to see exactly how the interview ended:

MARGARET BRENNAN: But the request for one that was overheard and testified to.

MARGARET BRENNAN: And the attempt itself doesn’t bother you?

REP. JORDAN: What the Democrats tell us? There was a quid pro quo. The scary thing is the Democrats have been out to get this president. I was struck by listening to Speaker Pelosi’s comments, her answer to your second question. She used the word impostor. I’m talking about the president of the United States, who 63 million people voted for, who won an Electoral College–

REP. JORDAN: –landslide. And yet these Democrats have been trying to get him- the start of this Congress, Congresswoman Tlaib said–

REP. JORDAN: –she wants to impeach him before any evidence. Five members, think about this–

REP. JORDAN: –five members of the Dem- of the Democrat- five Democrat members on the Intelligence Committee have voted to move forward with impeachment even before the whistleblower complaint was filed.

MARGARET BRENNAN: I’ve got to go to a commercial break. Thank you very much, Congressman.

I suspect that Ms. Brennan was very glad to see that interview end. Life is hard when you have to deal with smart people who tend to be at least one step ahead of you.

Most of the interview is a classic example of media bias and rehearsed talking points, but the question as to why the Democrats did not focus on the places the Russians knew to focus on is wonderful! Just for the record, there is no evidence that the Democrats were behind the hacking of the DNC. Remember that the DNC would not let the FBI examine their computers.

The Conservative Treehouse has a few relevant comments on this intervieiw:

The… wait…. then again, THAT’S ENTIRELY THE MOTIVE to blame the Russians:

If the Russians were actually successful in influencing the 2016 election, it was because Americans were not paying close attention to what was going on. The Russians will always try to influence our elections. We will always try to influence elections in other countries. We live in the world of Spy v. Spy illustrated by Mad Magazine in the 1950’s. It is our responsibility as Americans to do our own research into what we see on social media. The best defense against foreign meddling in our elections is an informed electorate!

Yesterday Real Clear Politics posted a video and transcript of a statement made by Senator Tom Coburn on Face the Nation.

So, the characterization is that we’re wanting to protect — what we’re wanting to do is to make sure we have a dynamic economy. And I have no problems, I’ve been out there for a long time with saying those who are making more ought to contribute more, but where does that money go? And what do you do with the money? Do you do something with the money that will actually get us further down the road and fix our ultimate long-term problem, which is we’re bankrupt? And we went off the cliff two years ago when we covered 90% of our debt-to-GDP? And by the way, if you actually look at it the way every other country [does], our debt-to-GDP right now is 120%. Not 90%, not 100%, it’s 120%.

So, if you look at that, what’s ultimately going to happen — one last fact, the average Greek citizen‘s debt, for their country, is $36,000; we’re at $51,000 per person in this country. We’re becoming Greece, and we have a government where we’re willing to pay the taxes for 65% of the cost of it. We need to change that. We need both, we need to do both.

Ed Morrissey at Hot Air posted an article today about some recent comments by Maryland Governor Martin O’Malley. On “Face The Nation” yesterday, Governor O’Malley told Bob Schieffer that he couldn’t say that we were better off now than we were four years ago, but “but that’s not the question for this election.” Really? (or ‘seriously?’ as my three-year-old granddaughter likes to say)

The logical question at that point was, “Then what is the point of this election?”

A day after saying, no, the country was not better off than it was four years ago, Maryland Gov. Martin O’Malley reversed course on Monday and said, yes, indeed it was.

“We are clearly better of as a country because we’re now creating jobs rathare than losing them,” O’Malley, a Democrat, said on CNN’s Starting Point. “But we have not recovered all that we lost in the Bush recession. That’s why we need to continue to move forward.”

He then motioned to a panel that included Jason Chaffetz, R-Utah, among others. “Is there anyone on this panel that thinks we’ve recovered all we lost in the Bush recession? Clearly we’re moving forward, we’re creating jobs, unemployment is down, job creation is up. And that job creation would not happen without the president’s leadership.”

I get it–it’s George Bush’s fault. These people are getting so desperate they are becoming comical. We need to make sure no one votes for them out of sympathy.

This is the chart posted at Hot Air: 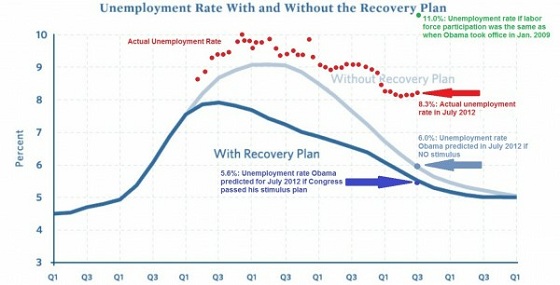 The Republicans are echoing Ronald Reagan:

I am sorry (but not surprised) to see the failure of the Obama Administration in so many areas. President Obama has done nothing that had a positive impact on our economy, and he has treated many of our friends around the world badly. I celebrate the fact that America elected a black President, but I fear that because President Obama has done such an inadequate job in the office that it will be difficult in the future for a black man to convince Americans that he is qualified to be President.

One of the agendas of the Obama Administration is to find a way to invalidate the Second Amendment. Fast and Furious did not work (even before it was discovered that they were the ones selling the guns) and various court cases have not been successful. But, they haven’t yet given up.

Breitbart.com reported today that Vice-President Biden stated on CBS’s “Face the Nation” that the shooting of Trayvon Martin should spark a national debate over gun control. Really?

The story at Breitbart points out that we don’t yet have all of the facts on this case. The author reminds us that if Zimmerman shot in self-defense, the gun laws saved his life. If Zimmerman did not shoot in self defense, he violated already existing gun laws–we don’t need more!

Beyond that, Biden’s bizarre notion that concealing and carrying guns doesn’t provide additional security is plainly nonsensical. Misuse of guns is always an issue – but as a general rule, of course carrying a gun makes you more safe than not carrying one. John Lott has pointed out clearly in More Guns, Less Crime:  “Concealed handgun laws reduce violent crime for two reasons. First, they reduce the number of attempted crimes because criminals are uncertain which potential victims can defend themselves. Second, victims who have guns are in a much better position to defend themselves.” This is called common sense, and the data backs it up.

The call for stricter gun laws is generally made by those who do not understand that the right to bear arms is part of what makes the United States Constitution work. Tampering with that right would be a huge mistake.