…“Despite his salary and perks, Nangle was heavily in debt, had poor credit (with a credit score reported as low as 593), and had regular cash flow problems as a result of extensive gambling at various casinos…,” federal prosecutors said.

Elected by the voters of Massachusetts.

President Trump has made a lot of money. He is evidently a smart businessman who understands how to create, market, and sell an idea. He is using those skills to raise money for his 2020 presidential campaign.

The Daily Caller posted an article Saturday about one of the Trump campaign’s more creative ways to raise campaign funds.

President Donald Trump’s move to sell merchandise as a means of piggybacking off his recent media antics has managed to net his campaign nearly $1 million in donations.

The campaign has sold nearly 55,000 packs of plastic straws, netting over $823,000 in sales, whereas campaign officials have sold about $50,000 worth of Sharpie pens, campaign communication director Tim Murtaugh told The New York Times.

More than a third of the people who purchased the straws had never donated to the campaign, Murtaugh said.

Trump began selling the Sharpies on Sept. 6 to raise money after CNN criticized him for supposedly using a pen on a map to alter Hurricane Dorian’s trajectory. The president doubled down on a tweet suggesting the storm would hit Alabama after many in the media tried to correct him, showing a map of the path of the hurricane that had been altered with a Sharpie.

“Buy the official Trump marker, which is different than every other marker on the market, because this one has the special ability to drive @CNN and the rest of the fake news crazy!” Brad Parscale, Trump’s campaign manager, said in a tweet announcing the marketing ploy.

This is a fantastic example of how to raise campaign funds and drive the media crazy. This is the way marketing works.

Mark Penn, a former pollster and advisor to President Clinton, posted an op-ed piece at The Hill today. I suspect he is no longer being invited to the Clinton’s dinner parties. The article explains how the plea deal with Michael Cohen is an attempt to set up President Trump. I am amazed at how vicious some of our politicians are when it comes to President Trump. Robert Mueller is a prime example of that, and it is sad.

Why was Michael Cohen investigated? Because the “Steele dossier” had him making secret trips to meet with Russians that never happened, so his business dealings got a thorough scrubbing and, in the process, he fell into the special counsel’s Manafort bin — the bin reserved for squeezing until the juice comes out. And now we are back to 1998 all over again, with presidents and presidential candidates covering up their alleged marital misdeeds and prosecutors trying to turn legal acts into illegal ones by inventing new crimes.

The plot to get President Trump out of office thickens, as Cohen obviously was his own mini-crime syndicate and decided that his betrayals of Trump meant he would be better served turning on his old boss to cut the best deal with prosecutors he could rather than holding out and getting the full Manafort treatment. That was clear the minute he hired attorney Lanny Davis, who doesn’t try cases and did past work for Hillary Clinton. Cohen had recorded his client, trying to entrap him, sold information about Trump (while acting as his lawyer) to corporations for millions of dollars, and didn’t pay taxes on millions.

This is the problem with this case:

The sweetener for the prosecutors, of course, was getting Cohen to plead guilty to campaign finance violations that were not campaign finance violations. Money paid to people who come out of the woodwork and shake down people under threat of revealing bad sexual stories are not legitimate campaign expenditures. They are personal expenditures. That is true for both candidates we like and candidates we don’t. Just imagine if candidates used campaign funds instead of their own money to pay folks like Stormy Daniels to keep quiet about affairs; they would get indicted for misuse of campaign funds for personal purposes and for tax evasion.

There appear to be two payments involved in this unusual plea — Cohen pleaded guilty to a campaign finance violation for having “coordinated” the American Media Inc. payment to Karen McDougal for her story, not for actually making the payment. So he is pleading guilty over a corporate contribution he did not make.

No one connected in any way with President Trump is treated in the usual way:

The usual procedures here would be for the FEC to investigate complaints and sort through these murky laws to determine if these kinds of payments are personal in nature or more properly classified as campaign expenditures. And, on the Daniels payment that was made and reimbursed by Trump, it is again a question of whether that was made for personal reasons (especially since they have been trying since 2011 to obtain agreement). Just because it would be helpful to the campaign does not convert it to a campaign expenditure. Think of a candidate with bad teeth who had dental work done to look better for the campaign; his campaign still could not pay for it because it’s a personal expenditure.

Contrast what is going on here with the treatment of the millions of dollars paid to a Democratic law firm which, in turn, paid out money to political research firm Fusion GPS and British ex-spy Christopher Steele without listing them on any campaign expenditure form — despite crystal-clear laws and regulations that the ultimate beneficiaries of the funds must be listed. This rule was even tightened recently. There is no question that hiring spies to do opposition research in Russia is a campaign expenditure, and yet, no prosecutorial raids have been sprung on the law firm, Fusion GPS or Steele. Reason: It does not “get” Trump.

Any investigation of Russian interference in the 2016 election that does not include money laundered through Perkins Coie to pay for the Russian dossier does not have credibility. I suspect that will be the point made in the coming months in an attempt to shut down this travesty. The foundation of appointing a Special Prosecutor was totally flawed and the investigation is even more flawed. It is time to let people associated with Donald Trump live in peace. To do otherwise is to criminalize political opinions. 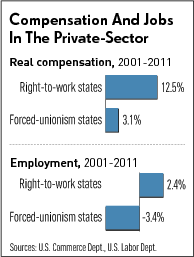