On Wednesday, The Washington Examiner posted an article about the National Education Association’s Representative Assembly’s annual meeting in Chicago.

The annual meeting for the nation’s largest teachers union included votes calling for universal mask and vaccine mandates , along with further commitments to advance racial equity in the classroom.

You can’t convince me that this organization actually has the best interests of our children at heart.

“More than 67 percent of the U.S. live in areas with medium or high COVID-19 community level, according to CDC Director Dr. Rochelle Walensky,” the measure says. “Mandatory masking, vaccines, and access to virtual education are necessary policy measures to reduce COVID danger.”

Other provisions in the agenda included votes denouncing the Supreme Court’s ruling last month overturning Roe v. Wade while calling for the court to be expanded, the abolition of the Senate filibuster, and the impeachment of the “justices who went against their sworn testimony to not overturn Roe v. Wade.“

“The three Trump appointed Supreme Court justices constitute a far right-wing coup inside the nation’s highest judicial body,” the measure says. “The new civil rights movement must defeat these attacks through organizing mass actions to defend women and all Americans from this attack.”

In a statement to the Washington Examiner, Stoops (Terry Stoops, the director of the Center for Effective Education at the North Carolina-based John Locke Foundation) said it was “unsurprising that the NEA tried to conceal their meeting documents,” noting that “they contain embarrassingly little about overcoming learning loss sustained by children attending schools that adhered to masking and reopening recommendations championed by NEA leaders during the pandemic.”

“NEA leaders claim that they remain focused on the needs of public school children and educators,” Stoops said. “Instead, meeting documents show that the NEA is nothing more than a pathetic assemblage of social justice warriors struggling to be relevant in an era of unprecedented parental empowerment.”

While it is not known which of the many provisions were adopted by the NEA assembly, the union did issue a press release Monday touting its approval of a new policy to “ensure safe, just, and equitable schools” and warning that the presence of law enforcement in schools contributed to excessive policing of students, Ed Week reported .

In a press release, the union said the NEA will “adopt a restorative justice philosophy to create a school climate that rejects the criminalization and policing of students” and “provide training and support for culturally competent instruction.”

“Cultural competency,” when used in educational settings, is a phrase that has at times been linked to critical race theory, an academic theory that posits U.S. institutions and culture are systemically racist and must be dismantled through anti-racism.

Just for the record, anti-racism is simply racism directed against white people. This is not a group that is furthering the education or critical thinking skills of the children of America.

On Monday, Just the News reported that there will be a rule change in federal education funding that will require schools to have certain LGBT policies in order to receive federal funding.

That change means that schools that accept any kind of funding, including students receiving FAFSA or Pell grants or students who receive federally subsidized school lunch funding, will be subject to the new Title IX LGBT interpretation.

This means that schools around the country will be forced to comply with a range of pro-transgender policies in things like sports, housing, locker rooms and bathrooms if they want to continue receiving federal funds. The effort began when President Joe Biden issued an executive order almost immediately upon taking office.

Unfortunately (or fortunately, depending on your point of view), federal money always comes with strings attached.

Remember, the Teacher Unions control the Democrat party through their donations. 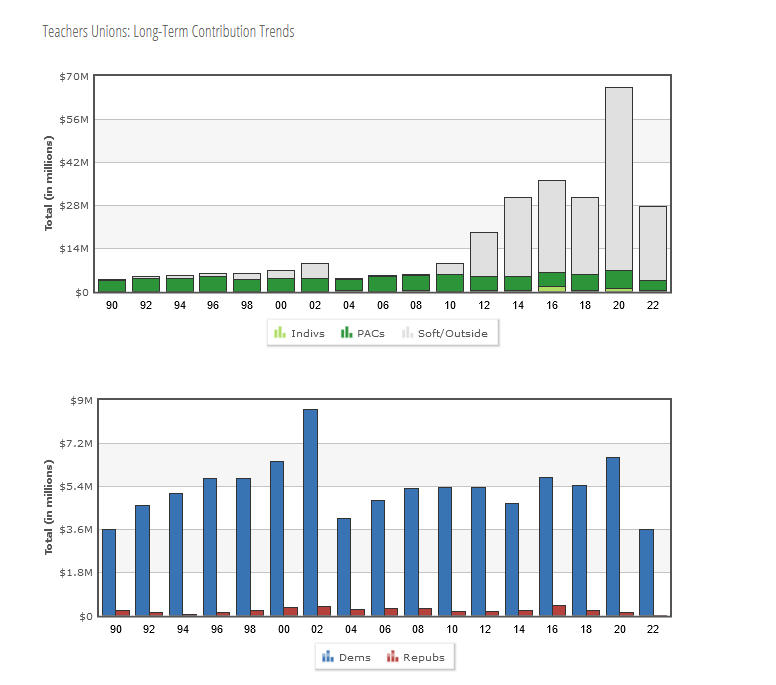 Again, the strings attached to federal funding could be used to hold up a suspension bridge. Many school districts need to take a look at what it costs to jump through the  hoops to receive federal funding versus the money received.

Many people join organizations hoping that they will fulfill the promise of helping to create a society where opportunities are equal. Sometimes those organizations work toward worthwhile goals, and sometimes those organizations are fronts for goals that are destructive. The title Black Lives Matter is a good one–black lives do matter, just as all lives matter. However, the tenants of the organization do not line up with the title. Unfortunately, there are many black Americans who have not yet realized this, but some black Americans are waking up. The Epoch Times posted an article yesterday about one black American who joined Black Lives matter hoping that they would be involved in activities that would help the black community. Unfortunately, he was wrong.

A Black Lives Matter chapter founder in Minnesota has resigned, claiming that the organization isn’t concerned about helping black communities or helping improve the education quality in Minneapolis, according to a video published last week.

Rashard Turner, the founder of a Black Lives Matter chapter in neighboring St. Paul, said he started the branch in 2015 but became disillusioned roughly a year after becoming “an insider” within the left-wing organization, according to a video released by TakeCharge—a group that rejects various provisions promoted by Black Lives Matter, including critical race theory-linked claims that the United States is inherently racist.

“After a year on the inside, I learned they had little concern for rebuilding black families, and they cared even less about improving the quality of education for students in Minneapolis,” Turner said in the video.

“That was made clear when they publicly denounced charter schools alongside the teachers union. I was an insider in Black Lives Matter. And I learned the ugly truth. The moratorium on charter schools does not support rebuilding the black family. But it does create barriers to a better education for black children. I resigned from Black Lives Matter after a year and a half. But I didn’t quit working to improve black lives and access to a great education.”

Please follow the link to the article to view the video. I hope that many more Americans will  learn what Rashard Turner has learned. 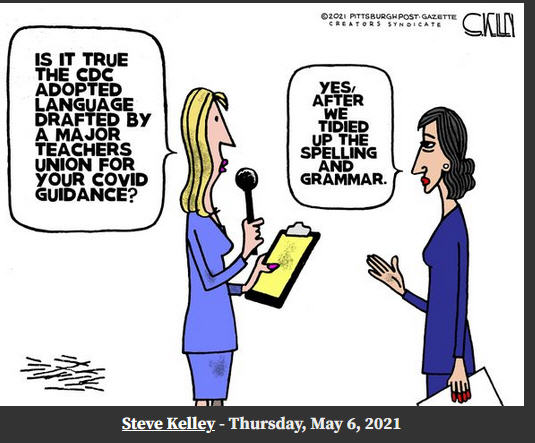 On Saturday, The New York Post posted an article about the influence of the Teachers’ Union on decisions that were made about reopening schools.

The American Federation of Teachers lobbied the Centers for Disease Control and Prevention on, and even suggested language for, the federal agency’s school-reopening guidance released in February.

The emails were obtained through a Freedom of Information Act request by the conservative watchdog group Americans for Public Trust and provided to The Post.

The documents show a flurry of activity between CDC Director Dr. Rochelle Walensky, her top advisors and union officials — with Biden brass being looped in at the White House — in the days before the highly-anticipated Feb. 12 announcement on school-reopening guidelines.

“Thank you again for Friday’s rich discussion about forthcoming CDC guidance and for your openness to the suggestions made by our president, Randi Weingarten, and the AFT,” wrote AFT senior director for health issues Kelly Trautner in a Feb 1 email — which described the union as the CDC’s “thought partner.”

Dr. Monica Gandhi, a professor of medicine at the University of California, San Francisco who has written extensively on coronavirus, called the CDC-AFT emails “very, very troubling,”

“What seems strange to me here is there would be this very intimate back and forth including phone calls where this political group gets to help formulate scientific guidance for our major public health organization in the United State,” Gandhi told The Post. “This is not how science-based guidelines should work or be put together.”

The close communication between the union and the feds came despite repeated assurances from CDC and Biden officials that the medical guidelines would “follow the science” and be free of political interference.

Yesterday The Gateway Pundit posted an article about the push by some teachers unions to delay the opening of the new school year.

The results from a study reported in the New England Journal of Medicine show that the only reason children are being kept from school due to the China coronavirus is politics.

Based on the study published in The New England Journal of Medicine, the senior author concluded that:

“[E]ven if children do get infected, they are less likely to transmit the disease to others than adults. We have not found a single instance of a child infecting parents.“

Please follow the link to read the entire article. It includes a lot of data to support the idea of sending children back to school.

I understand the concern that teachers have for their own safety as well as the safety of their students. Students in the early years of school are little petri dishes for any bug that is anywhere in the vicinity. For whatever reason, this does not seem to be true of the coronavirus. However, it has been proven that children need socialization (and that socialization strengthens everyone’s immune system).

I think it is time to send the children back to school. Some of the problems people are having dealing with the partial and full shutdown of our society are related to having children not attending school. I don’t think the academics are the real concern here–I think children need the time interacting with their schoolmates as part of their growth process as people.

Yesterday Just the News reported that the Los Angeles teachers union says schools can’t reopen unless charter schools get shut down and police defunded. Charter schools generally outperform public schools, so why are the teachers trying to shut them down?

A major teachers union is claiming that the re-opening of schools in its district cannot occur without several substantial policy provisions in place, including a “moratorium” on charter schools and the defunding of local police.

United Teachers Los Angeles, a 35,000-strong union in the Los Angeles Unified School District, made those demands in a policy paper it released this week. The organization called on local authorities to “keep school campuses closed when the semester begins on Aug. 18.”

The union outlined numerous major provisions it says will be necessary to reopen schools again, including sequestering students in small groups throughout the school day, providing students with masks and other forms of protective equipment, and re-designing school layouts in order to facilitate “social distancing.”

Police violence “is a leading cause of death and trauma for Black people, and is a serious public health and moral issue,” the union writes. The document calls on authorities to “shift the astronomical amount of money devoted to policing, to education and other essential needs such as housing and public health.”

“Privately operated, publicly funded charter schools,” meanwhile, “drain resources from district schools,” the union states. The practice of “colocating” charter schools in existing structures, it continues, “adds students to campuses when we need to reduce the number of students to allow for physical distancing.”

The union also demands the implementation of a federal Medicare-for-All program, several new state-level taxes on wealthy people, and a “federal bailout” of the school district.

“The benefits to restarting physical schools must outweigh the risks, especially for our most vulnerable students and school communities,” the document continues.

“As it stands, the only people guaranteed to benefit from the premature physical reopening of schools amidst a rapidly accelerating pandemic are billionaires and the politicians they’ve purchased,” it adds.

I want teachers and students to be safe when schools open. I think we all do. However, the teachers union has overlooked the negative impact on the students as a result of the schools being closed during the end of the last school year. They have also overlooked the fact that many foreign countries have had their schools open for a while without any negative results. They are also overreaching into political issues that have nothing to do with education. I wonder if the teachers who are members of the teachers’ union agree with the demands that their union is making.