Yesterday Just the News reported that the Los Angeles teachers union says schools can’t reopen unless charter schools get shut down and police defunded. Charter schools generally outperform public schools, so why are the teachers trying to shut them down?

A major teachers union is claiming that the re-opening of schools in its district cannot occur without several substantial policy provisions in place, including a “moratorium” on charter schools and the defunding of local police.

United Teachers Los Angeles, a 35,000-strong union in the Los Angeles Unified School District, made those demands in a policy paper it released this week. The organization called on local authorities to “keep school campuses closed when the semester begins on Aug. 18.”

The union outlined numerous major provisions it says will be necessary to reopen schools again, including sequestering students in small groups throughout the school day, providing students with masks and other forms of protective equipment, and re-designing school layouts in order to facilitate “social distancing.”

Police violence “is a leading cause of death and trauma for Black people, and is a serious public health and moral issue,” the union writes. The document calls on authorities to “shift the astronomical amount of money devoted to policing, to education and other essential needs such as housing and public health.”

“Privately operated, publicly funded charter schools,” meanwhile, “drain resources from district schools,” the union states. The practice of “colocating” charter schools in existing structures, it continues, “adds students to campuses when we need to reduce the number of students to allow for physical distancing.”

The union also demands the implementation of a federal Medicare-for-All program, several new state-level taxes on wealthy people, and a “federal bailout” of the school district.

“The benefits to restarting physical schools must outweigh the risks, especially for our most vulnerable students and school communities,” the document continues.

“As it stands, the only people guaranteed to benefit from the premature physical reopening of schools amidst a rapidly accelerating pandemic are billionaires and the politicians they’ve purchased,” it adds.

I want teachers and students to be safe when schools open. I think we all do. However, the teachers union has overlooked the negative impact on the students as a result of the schools being closed during the end of the last school year. They have also overlooked the fact that many foreign countries have had their schools open for a while without any negative results. They are also overreaching into political issues that have nothing to do with education. I wonder if the teachers who are members of the teachers’ union agree with the demands that their union is making.

There really is a wolf, but it’s not in the sequester–it’s in the unsustainable spending which is creating an unmanageable deficit. But that ‘wolf’ is being ignored–to some extent by both sides of the aisle in Washington.

But back to the President crying ‘wolf.’ Marc Thiessen posted an article at the American Enterprise Institute on Monday entitled, “The president who cried ‘Sequester!’”

Mr. Thiessen points out that so far the biggest damage done by the sequester has been to President Obama’s credibility. The credibility problem began during the final debate with Mitt Romney when President Obama stated, “The sequester is not something that I’ve proposed. It is something that Congress has proposed.” I believe the Washington Post gave the President four pinocchio’s for that statement. The problem with the internet and YouTube is that it is very easy to look up past statements of people in office. The President also stated that the sequester would never happen. Oh well.

The discourse got worse. The sequester would bring plagues and pestilence; the sequester would mean that everything about America we know and love would be gone. The sky would fall, the glaciers would melt, etc. Secretary of education, Arne Duncan, claimed that teachers would get pink slips. Homeland Security began letting criminals out of jail. Children would lose the Head Start Program (which has been proven ineffective anyway). The janitors at the Capitol would take a pay cut. When investigated, all of these claims proved to be false.

The straw that broke the camel’s back for me was the answer given to Charles Brown of Raleigh, North Carolina, (see rightwinggranny.com) when he sent a memo to Washington asking how to implement the budget cuts in sequester. The bottom line of the answer he received was “make the cuts as painful to the public as possible.”

The posturing by the President and the Democrat Party on the sequester is not only bad politics, it is bad for the country. Can we please re-open the debate on term limits for Congress? That is probably not the total answer, but it would be a start. 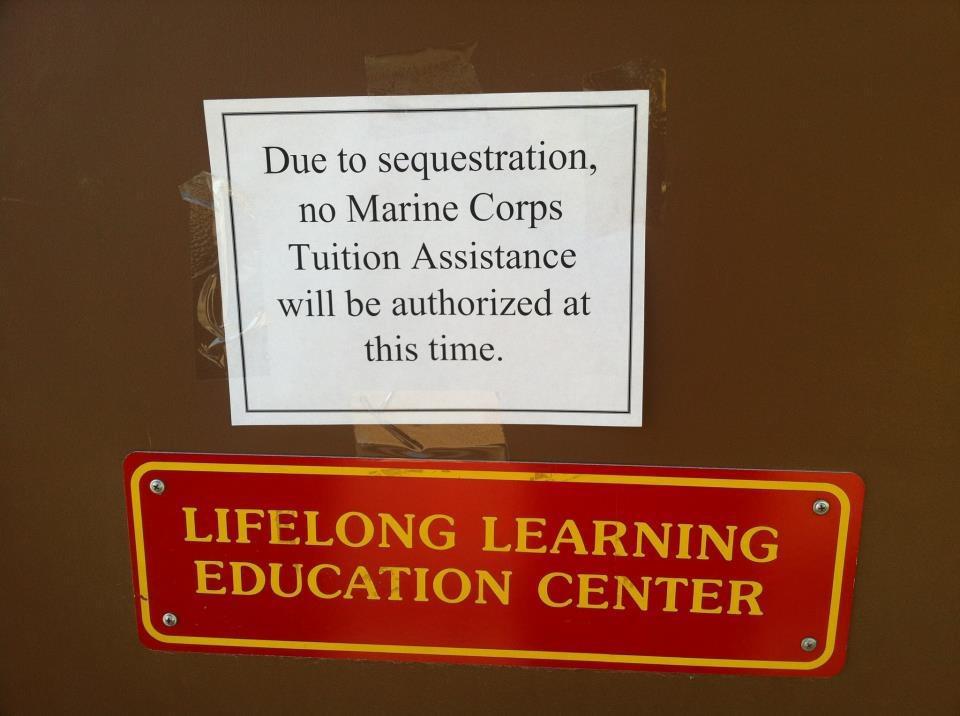 Earlier this week (rightwinggranny.com) I posted an article quoting a government memo requesting all government departments to make the sequester cuts as painful as possible. The picture above was posted by a former Marine and shows how that memo is being carried out.

This is not only an insult to those men and women who serve our country in the Armed Forces, it is an insult to every America who cares about our troops.

I honestly have to admit that both Republicans and Democrats are quite capable of using the fact that the sequester has gone into effect for political gain. What I am deeply concerned about is how President Obama is putting aside the good of the American people in his quest to destroy the Republican party, have Democrats take full control of Congress next year, and put forth an agenda to the left of anything America has ever seen.

The Washington Examiner posted an article on that subject today.

“The goal,” The Washington Post reports, “is to flip the Republican-held House back to Democratic control, allowing Obama to push forward with a progressive agenda on gun control, immigration, climate change and the economy during his final two years in office, according to congressional Democrats, strategists and others familiar with Obama’s thinking.”

The article in the Washington Examiner explains how President Obama plans to use the sequester:

For perhaps the first time in the history of the United States, it is in the political interest of a president to inflict maximum pain on the American people. Obama could have spent the last 16 months preparing to mitigate sequestration’s impact on the American people, as any responsible manager would have. Instead, he has done the opposite, explicitly ordering government agencies not to prepare for the worst. And he has refused all Republican efforts to pass legislation that would minimize the sequester’s pain.

Glen Reynolds at Instapundit has a very interesting take on this:

Somebody should really put in a FOIA request for communications between the White House and agencies about sequester implementation. There’s gold in those emails.

This is the price we pay for putting a community organizer who is not a leader in the White House. It is up to the voters next year to decide how they feel about President Obama’s plan.

Yesterday Senator Rand Paul posted an article at Investors.com detailing some of the actual numbers in the sequester. Senator Paul reminds us that the sequester cuts the federal budget by only 2.3%–leaving 97.7% of the budget intact.

The sequester barely begins to skim the surface of the problem. Since taking office, President Obama has increased federal domestic agencies’ budget by 17%. This 17% increase since 2008 will have to endure a 5% cut.

This expansion of government is equivalent to the entire chain of Whole Foods or Macy’s department stores, in just one year.

President Obama has dramatically expanded our federal government, and the American taxpayers should not have to endure more tax increases to fund it.

We have to start cutting back.

Unfortunately, there are some people in government who do not want to see any cuts at all–they simply want to take more money out of the pockets of working Americans. The scare tactics are everywhere–from releasing prisoners to threatening longer lines at airports. Unless Americans wake up and realize that the Obama Administration and the majority of the news media are lying about the impact of these cuts, we can expect further increases in both taxes and spending and an economy that is simply not growing at an acceptable rate. The voters will determine the future of our country by how they vote in 2014. I think that the voters in that election will decide whether we become Greece or remain America.

This is where we are:

George Will posted an article at the Washington Post yesterday explaining that the current discussions are all smoke and mirrors.

This whole super committee thing seems to be much ado about nothing.