Senator Ted Cruz is not a Washington insider. Despite the fact that his career path has taken him to Washington, he is not part of the ‘in-crowd.’ He has shown numerous times that he has basic principles and that he is willing to take a stand on those principles whether anyone joins him or not. This sort of thinking is dangerous to the Washington establishment–of either party. That is one reason the attacks on him will increase as the primary elections continue.

Currently the Internal Revenue Service Tax Code is a tribute to the effectiveness of lobbyists. The tax code is used to encourage certain behavior and discourage other behavior. There are times when the tax code has been used to encourage marriage and families and times when it has been used to discourage marriage. Certain business with strong lobbyists have received tax breaks in the past. The tax code has been used to subsidize certain industries and behaviors. Crony capitalism has been a major force behind changes and writing of the tax code. It is time for that to end, and Ted Cruz has an interesting suggestion as to how to end it.

The following is taken from Ted Cruz’s webpage: 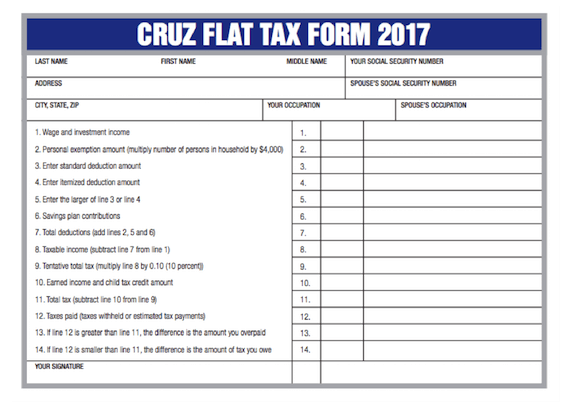 Wouldn’t it be nice to be able to pay your taxes on this simple form?

The corporate income tax along with the payroll tax are abolished, replaced by a 16% Business Flat Tax.

The Simple Flat Tax creates Universal Savings Accounts (USA) allowing savings of up to $25,000 per year in tax-deferred dollars.

Savers can withdraw the funds at any time for any reason – whether it be for college tuition, a down payment on a home, or their son or daughter’s wedding. This savings feature harmonizes with the tax elements of the Cruz Simple Flat Tax to move toward encouraging savings and investment – a recipe for economic growth and jobs.

There are other tax reform plans out there, but this plan looks possible and interesting. The plan also eliminates the death tax, the overseas profits tax, the Alternative Minimum Tax, and the ObamaCare taxes.

I would just like to note that there is some serious double taxation in our current tax code–the death tax taxes money that taxes were paid on during the life of the person who died. Taxes paid on Social Security income are being paid on money that was already taxed when it was earned. The government needs to become considerable less greedy and allow Americans to keep more of the  money they earn.

“TIGTA identified that because of a programming error, over $27 million of refunds were erroneously issued for 13,043 Tax Year 2013 tax returns,” the audit said. “The programming error is overriding the IRS’s two-week processing delay on some refund tax returns that are identified by the IRS as potentially fraudulent.”

The audit said the returns were flagged for claiming a “questionable tax credit” but were then automatically issued before the IRS could complete its verification process.

In addition, the audit identified 3,910 “potentially fraudulent” tax returns that were issued due to ineffective monitoring, totaling $19 million.

“The IRS did not ensure that tax examiners timely completed their verification work,” the audit said. “Name mismatches in IRS systems prevented refund holds from posting to tax accounts. Refund holds were either not set correctly or not functioning as intended.”

The article states that the audit recommended that the IRS improve its screening and verification process. No kidding.

Sometimes you wonder if Congress were spending their own money, would they be a little more careful with it?

…In the last year with complete records, 2010, the amount of fraudulent payments hit 4.2 billion dollars and all tax credits combined cost about 7.6 billion last year.

…Debbie Stabenow, who is one of many democratic women with IQs in single digits said she doesn’t believe illegal aliens are collecting federal benefits even though the idea came from the Treasury Inspector General who stated unequivocally that illegals are collecting benefits was right in front of her.

The amendment failed with unanimous support of the republicans on the committee.

Why don’t we either return illegal aliens to their home countries or take steps to prevent them from taking money out of the pockets of Americans. I don’t mind giving someone a hand-up when needed, but we have reached the point where illegal aliens are committing fraud to take money from Americans. That has got to stop.

CNN posted an article today about how the subsidies paid to ObamaCare subscribers are going to impact their taxes. No one told them this was going to be taxable!

Obamacare enrollees who received subsidies to help pay for coverage will soon have to reconcile how much they actually earned in 2014 with how much they estimated when they applied many, many months ago.

This will likely lead to some very unhappy Americans. Those who underestimated their income either will receive smaller tax refunds or will owe the IRS money.

That’s because subsidies are actually tax credits and are based on annual income, but folks got their 2014 subsidy before knowing exactly what they’d make in 2014. So you’ll have to reconcile the two with the IRS during the upcoming tax filing season.

Filing taxes has never been any fun–ObamaCare just made it worse.

Subsidies were what kept the cost of ObamaCare down for subscribers:

We’re not talking chump change. Those who applied through the federal exchange received an average monthly subsidy of $264, according to the most recent figures reported by the Obama administration. They only had to pay $82 a month, on average, for coverage, Roughly 85% of total enrollees received help with insurance premiums. The administration last month said 2014 enrollment was 6.7 million.

Those who underestimated their earnings could owe thousands of dollars, though there is a $2,500 cap for those who remain eligible for subsidies. The threshold for eligibility is based on income – $45,900 for an individual and $94,200 for a family in 2014.

In June, the Supreme Court is expected to rule on whether or not subsidies can be given in states that did not create healthcare exchanges. If the ruling says no, we can expect total chaos in the healthcare sector of the economy while everyone regroups. Meanwhile, the taxman cometh!

Every time someone threatens to cut government spending, big government types begin screaming that spending is already cut to the bone. Well, if that is true, why don’t we just cut government waste and fraud?

Today The Blaze posted a story about some recent tax refunds mailed out by the Internal Revenue Service (IRS).

The Internal Revenue Service issued $4 billion in fraudulent tax refunds last year to people using stolen identities, with some of the money going to addresses in Bulgaria, Lithuania and Ireland, according to an inspector general’s report released Thursday.

The IRS sent a total of 655 tax refunds to a single address in Lithuania, and 343 refunds went to a lone address in Shanghai.

Again, 343 payments to one address.

There are certain red flags that result in American taxpayers being audited–a change in giving habits, a drastic change in income, and various other things will set off a flag and result in an audit. Doesn’t the IRS software have the capacity to set off a flag if 343 people have the same address? I realize a large apartment building could easily house 343 people, but wouldn’t they have individual addresses? Shouldn’t that many people at the same address raise a question with someone?

Florida is a prime target for identity theft for the purpose of  tax fraud. The article reports:

The article reports that the IRS has developed a computer program to deal with the problem of identity theft and false tax returns. Let’s hope it is more secure than the ObamaCare website. Meanwhile, let’s see if we can end enough fraud to help with the budget deficit.