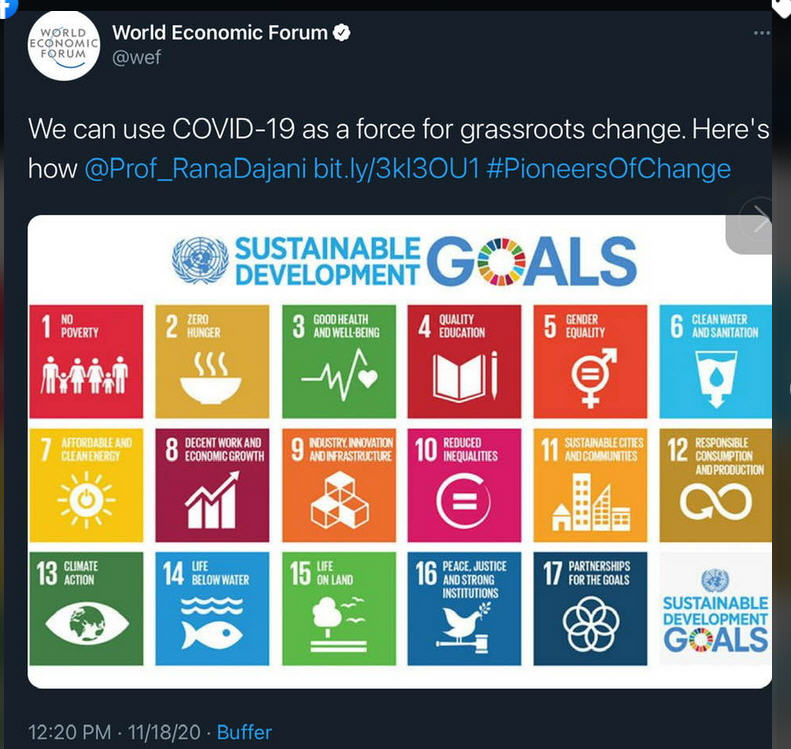 Watch the video below that appeared on American television while considering the fact that the family is the building block of American society:

The United Nations was established for the purpose of promoting freedom, democracy, and world peace. At least that’s what we were told. It has since drifted from those ideals. The United Nations’ Universal Declaration of Human Rights outlines rights given by government. There is no mention of the concept in the U.S. Declaration of Independence that rights come from God and that governments are put in place to protect those rights. The education group of the United Nations focuses on teaching children a perspective based on the UN’s ideals of sustainable development which do not include the concept of nation states or individual freedom.

It should be noted that a document posted on the UN education agency’s website about “Education for Sustainable Development” states, “Generally, more highly educated people, who have higher incomes, consume more resources than poorly educated people, who tend to have lower incomes.” The UN ‘toolkit’ for global sustainable education explains, “In this case, more education increases the threat to sustainability.” So the UN sees education as a threat to their agenda.

The concept of ‘The New World Order’ has been the goal of some in our government for a number of years. This concept is tied up with the United Nations and the move in American education to create ‘global citizens.’ There is nothing wrong with the concept of teaching children to consider themselves citizens of the world as well as Americans, but we are not teaching them to be American citizens. We are not teaching them about the values in America that are worth defending.

So where am I going with this? America is the biggest obstacle to those who believe in the “New World Order” (which means a one-world government ruled by an elite group of people). The New World Order is simply tyranny on a global scale. The public school education our children are getting is preparing them to be open to this form of government. Our AP History courses are distorting our history, the Christian values upon which our nation was founded are being undermined and mocked, and the foundations of America are being attacked in our public schools (and also in some of our private and parochial schools).

Right now, the answer to this problem is homeschooling. Until enough parents wake up and hold local and federal officials accountable, I don’t see the curriculum in our public schools changing.

The website Democrats Against U. N. Agenda 21 does a wonderful job of explaining what is currently happening with Agenda 21 in America. The website explains exactly how the sovereignty of the United States and the freedom we are accustomed to are being threatened by Agenda 21.

But then you have UN Agenda 21.  What is it?  See our videos and radio shows at the bottom of this page (or search YouTube for Rosa Koire) or buy BEHIND THE GREEN MASK: U.N. Agenda 21 by Rosa Koire click here

Considering its policies are woven into all the General Plans of the cities and counties,  it’s important for people to know where these policies are coming from.  While many people support the United Nations for its peacemaking efforts, hardly anyone knows that they have very specific land use policies that they would like to see implemented in every city, county, state and nation.  The specific plan is called United Nations Agenda 21 Sustainable Development, which has its basis in Communitarianism.  By now, most Americans have heard of sustainable development but are largely unaware of Agenda 21.

Please follow the link to the website to education yourself as to what Agenda 21 is and what is happening to the freedom of those who speak out against it. This is a bi-partisan issue–all of us need to pay attention and get involved.

I have written a few articles on Agenda 21. If you use the search engine within this website you will find them. I would like to remind you of a few statements made by those who are in favor of Agenda 21.

“Land, because of its unique nature and the crucial role it plays in human settlements, cannot be treated as an ordinary asset, controlled by individuals and subject to the pressures and inefficiencies of the market. Private land ownership is also a principle instrument of the accumulation and concentration of wealth and therefore contributes to social injustice; if unchecked, it may become a major obstacle in the planning and implementation of development schemes.”  This is a quote from the 1976 UN Conference on Human Settlement, held in Vancouver, Canada. Under “Section D. Land,” of the Report of Habitat, which came out of the conference. It is from the preamble and speaks of the private ownership of land.

The report, “21 Issues for the 21st Century,” from the United Nations Environment Program (UNEP) Foresight Process, is the culmination of a two-year deliberative process involving 22 core scientists. It is expected to receive considerable attention in the run-up to the Rio+20 United Nations Conference on Sustainable Development, which will be held in Rio, Brazil, in June.

The scientists who wrote the report say it focuses on identifying emerging issues in the global environment, and that it is not about mandating solutions.

But its critics see an agenda lurking in its 60 pages, which call for a complete overhaul of how the world’s food and water are created and distributed — something the report says is “urgently needed” for the human race to keep feeding and hydrating itself safely.

There is no mention of the fact that many of the hunger problems in the world are caused by political situations where tyrannical dictators are in charge. During the time of the food for oil program, run by the United Nations, Saddam Hussein was eating well and building magnificent palaces. The United Nations was up to its neck in corruption is managing the program. Have we not learned from our mistakes? Might I also mention that many of those tyrannical dictators currently sit on the United Nations Human Rights Committee.

My favorite quote from the article (the italics are mine):

“We are not talking about a world government,” said Dr. Oren Young, professor of institutional and international governance and environmental institutions at the University of California at Santa Barbara, and one of the scientists who issued the report.

He said the panel’s conversations included questions like, “How do we resolve these problems without creating this monster entity?”

Young said the panel wasn’t tasked with finding all the answers.

If they weren’t expected to find the answers, why did they meet? How much money did they spend not finding all the answers?
More questionable actions by our government:

The State Dept. has already weighed in on many of the issues presented by the Foresight Panel in its own statement, titled “Sustainable Development for the Next Twenty Years United States Views on RIO+20.”

Submitted to the U.N by the Bureau of Oceans and International Environmental and Scientific Affairs (OIES) in November, this policy vision makes it clear the State Dept. will back global government solutions — whether they be in addressing the overfishing of the oceans, making national laws and regulations more transparent, addressing land and ocean-based pollution, or water management.

I think it is time to clean house entirely in Washington–elected officials and bureaucrats. Let’s fire everyone and start from scratch.

…development that meets the needs of the present without compromising the ability of future generations to meet their own needs.

The idea here is simple–rather than aspire to obtain a higher standard of living in countries without infrastructure, reliable electricity, and sanitation facilities, we will simply lower the standards of the western world. This is not about ecology–this is about redistribution of wealth.

According to the study itself, the adoption of the new “sustainability framework” will make the EPA more “anticipatory” in its approach to environmental issues, broaden its focus to include both social and economic as well as environmental “pillars,” and “strengthen EPA as an organization and a leader in the nation’s progress toward a sustainable future.”

Whatever EPA does with its suggestions, the study emphasizes, will be “discretionary.” But the study urges EPA to “create a new culture among all EPA employees,” and hire an array of new experts in order to bring the sustainability focus to every corner of the agency and its operations. Changes will move faster “as EPA’s intentions and goals in sustainability become clear to employees,” the study says.

The National Academies and the EPA held a meeting last week in Washington to begin public discussion of the study.

One of the things we might want to remember here is that the EPA is not an elected body. They cannot easily be held accountable. They cannot be voted out of office. Regardless of how you feel about the environmental issues here, there is definitely a constitutional issue here.

“Sustainable development” is a UN program–it is not an American program. Americans have never had a chance to vote on it or any group implementing it. Giving the EPA any more power than they already have would be a drastic error in judgement. Please google “Agenda 21” for more information on what is behind the move toward sustainable development.

A Threat to Our Constitutional Rights

~ Sponsored by the Northborough Tea Party ~

“All that is necessary for the triumph of evil

is for good men to do nothing” – Edmund Burke