Just the News updated its article about Michael White, a Navy veteran who was recently returned to the U.S. from Iran.

An Iranian doctor living in Florida has in recent days been allowed to return to his country in an apparent exchange with Tehran in which a U.S. Navy veteran was returned last week to America.

The doctor, Matteo Taerri, pleaded guilty late last year in connection with attempting to export a filter to Iran that he said was for vaccine research. However, U.S. authorities said the filter required a license because it could be used for chemical and biological warfare, according to the Associated Press. Taerri was also accused of orchestrating a series of bank deposits less than $10,000 to evade federal reporting requirements.

Last week, Michael White, the Navy veteran, was returned to the U.S.

White, of California, was detained in July 2018 while visiting a girlfriend in Iran. He was convicted of insulting the country’s supreme leader and putting private information online, the wire service also reports. White had been released from prison in March on a medical furlough and was awaiting his return.

Earlier last week, Iranian scientist named Sirous Asgari returned to Tehran after being acquitted in a federal trade secrets case and deported. He was working on a U.S. Navy project at Case Western Reserve University in Cleveland.

I am glad that Michael White was able to return to America, but I am concerned about the price we paid for that return. How many more Americans will Iran take hostage in order to get their intelligence assets out of America?

The easiest way to end the drug war and the power of the cartels would be for Americans to stop using illegal drugs. Unfortunately that has not happened and is not likely to happen. However, that is the true answer to the problem. Meanwhile China continues to smuggle illegal drugs into America–either through the porous southern border and through our ports. A drugged out nation will eventually be very easy to take over.

Sara Carter posted an article today about a recent incident in the Eastern Pacific Ocean.

The U.S. Coast Guard intercepted a vessel in the Eastern Pacific Ocean on May 14 carrying 1.5 tons of cocaine valued at over $28 million, according to the Department of Defense.

…The Trump administration ramped up counternarcotics operations on April 1 after the Pentagon received intelligence that the drug cartels were planning to exploit the coronavirus crisis. In response, General Mark Milley, Chairman of the Joint Chiefs of Staff, announced that the U.S. wouldn’t let the cartels “get past jump street.”

The President and Secretary of Defense Mark Esper confirmed that a number of U.S. vessels had been moved into the eastern Pacific and the Caribbean Sea to counter growing threats from the drug cartels in Latin America. Speaking with reporters at the time, Trump said of the move, “we are tired of drugs pouring into our country from other places.  And we’re tired of seeing drugs pouring into different parts of Latin America, South America, and just coming into our country.”

“Now we’ve got them stopped at the border and they’re trying to do it by sea,” Trump explained. “So we stop them at the border with — and, frankly, with the help of Mexico.  Mexico, right now, has 27,000 soldiers on our southern border.  They never had any soldiers. They’re doing that because I’ve asked them to do it.  That’s the only reason they’re doing it.  They have 27,000 soldiers.”

He continued, “So now they’re trying to bring it in by boat and by ship — the drug lords and the people doing drugs — and trying to destroy our country from inside with drugs.  And we’re hitting them very, very hard.  And that’s why we’re doing that.”

This is another example of President Trump exercising leadership to protect the American people.

Up until this point, one of the ways that people have been checked to see if they have the coronavirus has been with temperature scans. If they have no temperature, it is assumed that they are not carrying the virus. Well, there is some new information about the virus that puts that test in a different perspective.

On Thursday, Just The News reported the following:

Coronavirus infections among Navy personnel have been harder to spot because symptoms among sailors are different from those in the general population, a four-star admiral warned.

Admiral John Aquilino, who commands the U.S. Pacific Fleet, sent the warning this month in a memo to commanders throughout the Navy. The memo described the fleet’s findings on how COVID-19 has presented among sailors.

“While the symptoms largely mirror [Centers for Disease Control] findings there are differences, possibly owing to our younger demographics, a healthy cohort, and rapid medical care,” Aquino wrote in the April 20 unclassified memo viewed by Just the News.

Noting that the CDC names fever as the most common first symptom of COVID, Aquilino wrote that the Pacific Fleet found that among infected sailors, fever appeared last.

“In order of reporting, the symptoms most often reported by sailors are: cough, headache, muscle aches, sore throat, loss of taste/smell, difficulty breathing, and finally, fever,” the admiral wrote.

As opposed to a common assumption that COVID-19 presents first in a way others can detect, Aquilino wrote, sailors’ symptoms are less obvious.

“As our initial symptoms may only be noticeable to the individual sailor, immediate reporting of symptoms to the chain of command and medical department is essential,” Aquilino wrote.

Early reporting will help stop the virus from spreading through ships and work spaces, the commander wrote. The key, he said, is for crews to self-monitor and report health issues as soon as possible.

This may explain why some of our ships have had outbreaks of the virus–it is probably not unusual for a sailor to have a headache or muscle aches after a hard day of work.

Right now, New York is a hot spot for the coronavirus. Samaritan’s Purse has erected a hospital in Central Park, and the USNS Comfort, a Navy hospital ship with 1,000 beds for patients, has arrived in New York harbor. New Yorkers have been asked to stay home to avoid further spread of the virus. So have they listened?

Here are some pictures: 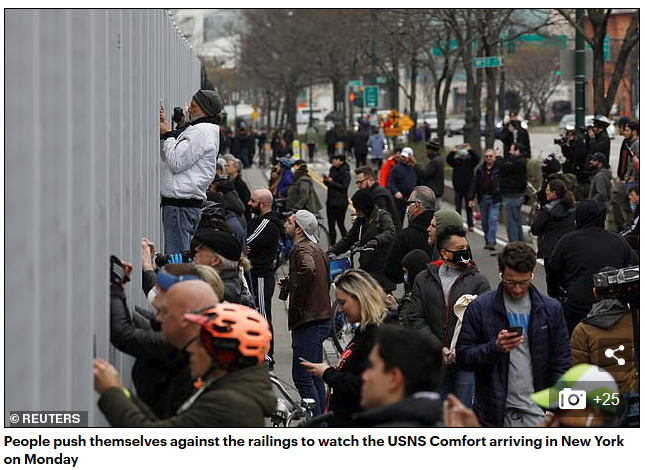 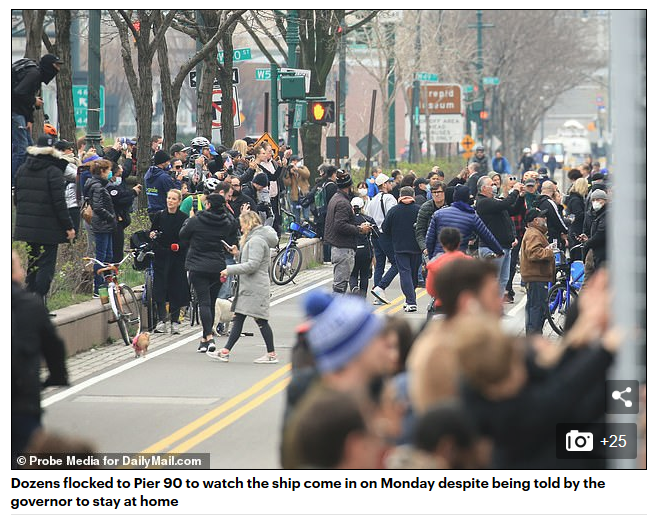 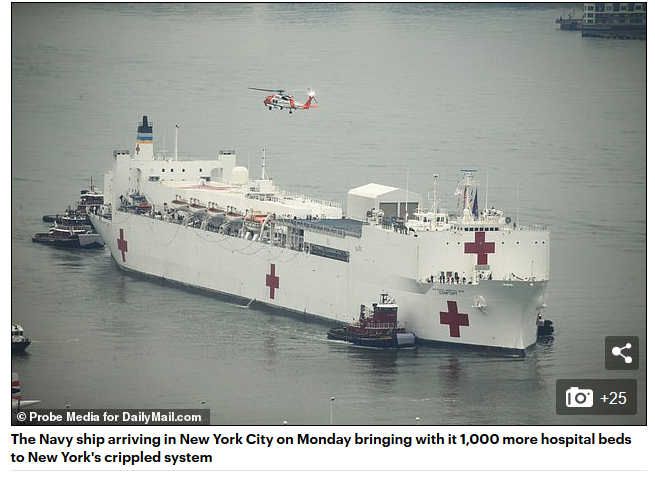 Obviously the arrival of the ship is a historic moment, and represents hope for the city. However, how many of the people in the crowd that came out to watch will be in New York City’s hospitals within the next two weeks? We need to learn to follow directions. At this point in time, that is a critical skill.

The following is a press release put out by Chick-Fil-A on December 4th:

Chick-fil-A is now an official associate partner of the 119th Army- Navy Game presented by USAA. One of the most storied and iconic rivalries in all of sports will take place on Saturday, December 8 at 3:00 p.m. ET at Lincoln Financial Field with the broadcast on CBS. The Chick-fil-A partnership includes a pop-up restaurant in Philadelphia that will be part of an experiential watch party for military service men and women. Chick-fil-A will host active duty military, veterans and their families at the private event.

The Chick-fil-A pop-up restaurant is designed to bring fans of rival football teams together by creating a shared table. Members of the military will attend the event to participate in spirited competition, a shared meal and a watch party. Army and Navy active military and veterans can register to attend the event by RSVP via this link:

Other activities include a card writing station to show military appreciation, giveaways, food and much more. Chick-fil-A will also be flying in Army and Navy veterans nominated by local franchise Operators located across the country to attend the pre-game ceremonies and the game.

Chick-fil-A founder Truett Cathy was a World War II veteran himself, and the company is proud to count many veterans among the more than 120,000 Operators, Team Members, and staff who represent the brand nationwide. The company plans to continue its commitment to hiring and honoring veterans, recognizing the value in their unique skills and easing the transition to civilian life after service. Recently, Chick-fil-A was named No. 2 on Indeed’s list of Top-Rated Workplaces as ranked by military veterans.

There are many reasons I love Chick-Fil-A.

Yesterday’s Navy Times posted a story about the tribute to veterans that took place at the Democratic National Convention. It seems that the patriotic display of military power taking place on the screen behind retired Adm. John Nathman, a former commander of Fleet Forces Command, as he spoke was of Russian ships. Oops.

“I was kind of in shock,” said Rob Barker, 38, a former electronics warfare technician who left the Navy in 2006. Having learned to visually identify foreign ships by their radars, Barker recognized the closest ship as the Kara-class cruiser Kerch.

“An immediate apology [from the committee] would be very nice,” Barker said. “Maybe acknowledge the fact that yes, they screwed up.”

The background — featured in the carefully choreographed hour leading up to the president’s Sept. 6 speech accepting the Democratic Party’s nomination — showed four ships with radar designs not used in the U.S. fleet.

A follow up article in the Navy Times today reports:

Democratic officials apologized Wednesday for mistakenly displaying an image of the Russian Navy during a tribute to America’s veterans at last week’s Democratic National Convention.

This is the text of the DNC statement:

“Due to vendor error, incorrect images appeared briefly on screen behind fifty-one veterans during the convention and the DNCC apologizes for this mistake,” the statement said. “This error should not distract from the words of Admiral Nathman and others who spoke to President Obama’s strong record on issues that impact those who have served our nation. We’re proud of the service and sacrifice of our veterans and military families, and while they were an important and active part our of convention, Mitt Romney failed to even mention them in his speech in Tampa.”

Notice that it was ‘ “vendor error.” They are not taking responsibility for the mistake. That is just too typical.