Yesterday PJ Media posted an article that includes a statement by United States Park Police acting Chief Gregory T. Monahan. As you probably know, the mainstream media accused President Trump of having peaceful protesters dispersed with tear gas so that he could walk across Lafayette Park and the National Mall.

This is the statement from the Park Police:

The United States Park Police (USPP) is committed to the peaceful expression of First Amendment rights. However, this past weekend’s demonstrations at Lafayette Park and across the National Mall included activities that were not part of a peaceful protest, which resulted in injuries to USPP officers in the line of duty, the destruction of public property and the defacing of memorials and monuments. During four days of demonstrations, 51 members of the USPP were injured; of those, 11 were transported to the hospital and released and three were admitted.

Multiple agencies assisted the USPP in responding to and quelling the acts of destruction and violence over the course of the weekend in order to protect citizens and property.

On Monday, June 1, the USPP worked with the United States Secret Service to have temporary fencing installed inside Lafayette Park. At approximately 6:33 pm, violent protestors on H Street NW began throwing projectiles including bricks, frozen water bottles and caustic liquids. The protestors also climbed onto a historic building at the north end of Lafayette Park that was destroyed by arson days prior. Intelligence had revealed calls for violence against the police, and officers found caches of glass bottles, baseball bats and metal poles hidden along the street.

To curtail the violence that was underway, the USPP, following established policy, issued three warnings over a loudspeaker to alert demonstrators on H Street to evacuate the area. Horse mounted patrol, Civil Disturbance Units and additional personnel were used to clear the area. As many of the protestors became more combative, continued to throw projectiles, and attempted to grab officers’ weapons, officers then employed the use of smoke canisters and pepper balls. No tear gas was used by USPP officers or other assisting law enforcement partners to close the area at Lafayette Park. Subsequently, the fence was installed.

On Saturday, the Museum of the Bible opened near the National Mall in Washington, D.C. The museum, founded by Hobby Lobby President Steve Green, houses the world’s largest private collection of rare, historic biblical artifacts, collected by Steve Green since 2009.

Breitbart posted an article about the museum today.

Some critics and biblical scholars are frustrated that the Museum of the Bible does not accurately represent other religions.

One professor said that the museum, which opened Saturday to the public and is located near the National Mall in Washington, DC, presents a point of view that favors American Protestantism over other religions such as Islam.

“There are a number of prominent omissions that make it clear that it’s not a museum of the Bible as one might imagine it from a secular perspective,” Joel S. Baden, a professor of the Hebrew Bible at Yale University, told the New York Times. “They don’t do a good job of talking about whether parts of the Bible are historically accurate.”

Baden added that he thinks the museum does not represent Islam and Mormonism to the same degree as other religions.

The 430,000 square foot Museum of the Bible contains six floors filled with a collection of 40,000 biblical artifacts that include first edition Bibles and Torah scrolls.

First of all, archeologists in Israel have found hundreds of artifacts proving the accuracy of the Bible. As far as I know, there have been no artifacts found that dispute anything in the Bible.

Thirdly, the Declaration of Independence and the U.S. Constitution were written with Biblical Judeo-Christian principles in mind. Our Founding Fathers talked about the fact that men were endowed with certain inalienable rights given to them by their Creator. That concept was revolutionary in its day (no pun intended) and was essentially based on the Bible.

To expect the Museum of the Bible to have documents relating to religions other than Christianity and Judaism is like going to the New England Patriots sports shop to look for New York Jets memorabilia–it’s not going to be there. I don’t mean to trivialize this, but there is a certain amount of common sense involved in realizing that a Museum of the Bible might focus on Christianity and Judaism.

This is a picture taken from Townhall.com: 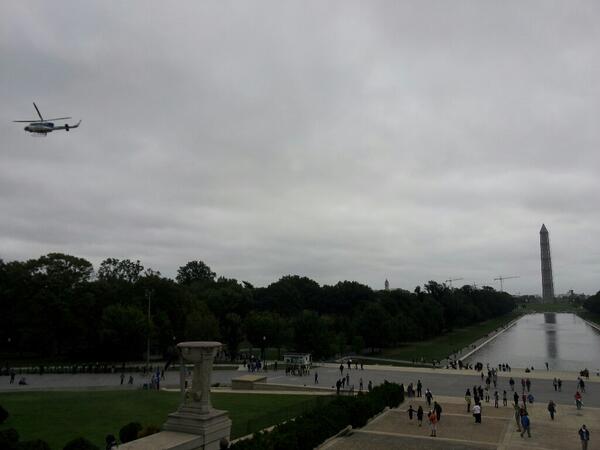 It is a helicopter hovering over the veterans protesting the barricading of the National Mall. The veterans took down the barricades and carried them to the White House, where they left them outside the gates on the lawn.

The article at Townhall reports:

It costs around $15,000 per hour to keep a helicopter in the air. As a reminder, the government is still shutdown and “non-essential” services are still unavailable. Apparently monitoring veterans with a helicopter is an “essential” function.

The National Mall is an open area. The cost of maintaining the Mall is the cost of picking up the trash and mowing the lawn. Neither of these activities approaches $15,000 a month, much less $15,000 an hour.

The closing of the Mall is an attack on the freedom of Americans. It is only one example of the government doing things to inconvenience Americans for political reasons. While World War II veterans are being denied access to their own monument, Camp David is open to the Vice-President and his family for a vacation. The political class should not be given special treatment while American citizens suffer because of their decisions.

This quote has been reported by various sources:

“We’ve been told to make life as difficult for people as we can,” an angry Park Ranger told the Washington Times. “It’s disgusting.”

The National Mall in Washington is closed, the World War II Memorial is barricaded, the Vietnam Memorial is closed, and other monuments are blocked off. However, if your politics agrees with the politics of the Obama Administration, you have access to the closed Mall.

Susana Flores, a spokesperson for the rally (“Camino Americano: March for Immigration Reform“), confirmed for the Washington Examiner that the Park Service will allow the event to take place under the group’s rights granted by the First Amendment.

About 30 members of Congress are expected to attend the rally, including House Minority Leader Nancy Pelosi, D-Calif., and Sen. Robert Menendez, D-N.J.

The event is hosted by several immigration activist groups, together with the Service Employees International Union (SEIU) and the AFL-CIO.

What about the rights of the businessmen the Park Service has closed or the elderly couple the Park Service evicted from their houseboat on Lake Mead? This is politics at its worst. We need to remember this in November 2014. The problem here is not the shutdown–we have had shutdowns before–the problem is the war on the American public by the government. The Obama Administration loves to pick winners and losers. In this battle the losers are the American public. We need to vote anyone out of office who took part in this war on Americans.

Reuters reported on Friday that a “Million Muppet March” is being planned for November 3 at the National Mall in Washington, D.C. The event is a response to Presidential Candidate Mitt Romney‘s statement that he loves Big Bird, but it is time to stop subsidizing PBS with taxpayer money. The implication is that it is time to kick Big Bird out of the public nest.

I like Big Bird too, but enough is enough. If Dora the Explorer can survive without public assistance, why can’t Big Bird? Do you know how many “Tickle-Me Elmo‘s” I have bought for my grandchildren? How many Sesame Street books? Sesame Street coloring books? I realize that Public Broadcasting is more than Sesame Street, but it seems that with an income generator like Sesame Street, it ought to be easy to make Public Broadcasting profitable. What about the fund raisers they do throughout the year? I understand that ‘they do not do commercials,’ but what about all the names mentioned of contributors in between shows?

Anyway, I hope those supporting Big Bird have a happy march. I also hope that someone comes up with a few ideas on some small places to cut the federal budget. If we can’t make little budget cuts, how will we ever make big ones?