Breitbart is reporting the following today:

New weekly jobless claims unexpectedly rose by 13,000 to 861,000 in the week that ended February 13, the Department of Labor said Thursday.

…Jobless claims—which are a proxy for layoffs—remain at extremely high levels. Prior to the pandemic, the highest level of claims was 695,000 hit in October of 1982. In March of 2009, at the depths of the financial crisis recession, jobless claims peaked at 665,000.

Even when the economy is creating a lot of demand for workers, many businesses will shed employees as they adjust to market conditions. But in a high-pressure labor market, those employees quickly find jobs and many never show up on the employment rolls. What appears to be happening now is that many workers who lose their jobs cannot quickly find replacement work and are forced to apply for benefits.

How many workers in the energy sector have lost their jobs because of the Executive Orders signed by President Biden? How many workers in areas that support energy sector jobs have lost their jobs since January 20th? These high unemployment numbers may be partially a result of the coronavirus, but they are more than likely related to the Executive Orders and the economic policies of the Biden administration. Unfortunately we can expect more high unemployment unless the Biden administration changes its policies.

The Big Tech-heavy NASDAQ Composite stock index closed at a record 11,108.07 Thursday evening, well over the historic 11,000 milestone, according to Nasdaq August 7. “A big reason for the market’s second-half momentum today was this week’s better-than-expected jobless claims report,” Nasdaq reported. “[N]early 1.19 million” filed jobless claims, but that marks “the lowest level since the pandemic began.” CNBC reported that this was the NASDAQ’s “seventh straight gain.”

According to comments to CNBC by Jefferies money market economist Thomas Simons on the jobless claims report:

‘The overall tone of the jobless claims data is the best it has been in 3 weeks or so. The decline is the biggest since the week of June 6, so the data does not have the same sort of ‘stalling out’ theme that we have seen in recent weeks.’

That context was apparently not worth reporting by ABC World News Tonight or CBS Evening News.

If you depend on the mainstream media to keep you informed, you might want to rethink that.

Just the News posted an article today reporting that the U.S. added 4.8 million jobs during the month of June, the Bureau of Labor Statistics reported Thursday. The unemployment rate fell to 11.1%. Economists had estimated that 3 million jobs would be added.

The increase in jobs comes as businesses begin rehiring following the height of the coronavirus pandemic in April and May.

The unemployment rate also dropped more than expected. The Dow Jones predicted that it would fall to 12.4% in June. It was 13.3% in May.

We are definitely moving in the right direction.

Also released this morning were the weekly jobless claims, which showed that 1.43 million Americans filed for first time unemployment benefits last week. This number was slightly higher than the expected 1.38 million.

The new numbers will help inform Congress later this month as they debate the possibility of expanding benefits for unemployed Americans.

The expanded benefits system has been providing the unemployed with an additional $600 a week, and covering workers who are not typically included in the state benefit systems.

Sections of the country have begun pausing their economic reopening efforts as the coronavirus spikes sharply in the south west.

It is likely that Congress will ultimately agree to extend those benefits, but decrease the $600 addition.

The $600 addition has been cited by many business owners as the reason some of their employees are not in a hurry to return to work. Whatever Congress subsidizes we will see more of. When unemployment is no longer subsidized, we will see less of it.

Breitbart is reporting today that the Labor Department has stated that initial claims for state unemployment benefits dropped 8,000 to a seasonally adjusted 207,000 for the week ending September 29th.

The article reports on the impact of Hurricane Florence:

Hurricane Florence, which hit North Carolina and South Carolina last month, affected claims, according to the Labor Department. The largest increases in initial claims for the week ending September 22 was in North Carolina. Claims in South Caroline rose by 2,830, the third largest rise behind Kentucky.

Jobless claims, which are a proxy for layoffs, have been closely watched for signs that trade disputes would be a drag on the labor market. Earlier this year, economists predicted that the steel and aluminum tariffs imposed by the Trump administration would cost 400,000 jobs. That prediction now looks way too pessimistic.

The jobless claims data has no impact on the monthly employment report, which is scheduled for release on Friday. Bloomberg’s survey of economists sees nonfarm payrolls likely increased by 18o,000 in September after rising 201,000 in August. The unemployment rate is expected to fall one-tenth of a percentage point to 3.8 percent, an 18-year low first hit in May.

President Trump may not be the perfect role model for your son, but it is obvious that he is a very savvy businessman who is working for the benefit of all Americans. I hope all Americans will vote next month to elect people who will support his policies. His economic policies are obviously working.

Yahoo News is reporting today that jobless claims expectantly fell last week. (Why was it unexpected–the trend has been going downward for a while?) Because of this, the Federal Reserve is expected to raise interest rates next week to keep the economy from overheating. I have mixed emotions about this. We do have to get back to reasonable interest rates, but it seems as if the federal reserve also has a habit of overreacting and slowing down (or speeding up) the economy a little too quickly.

This is a chart of interest rates starting in approximately 2008 taken from trading economics: 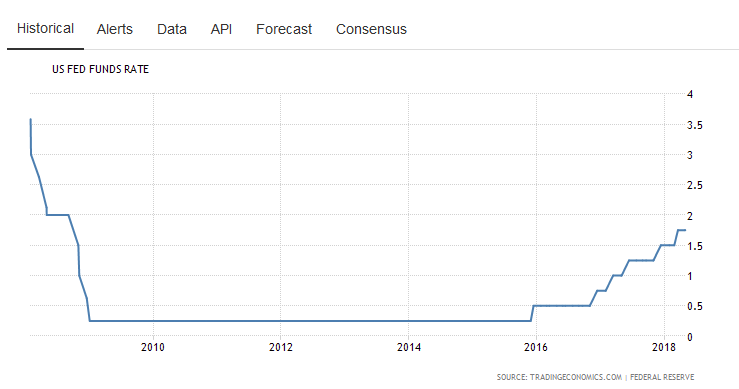 As you can see, the rates were kept very low during the Obama Administration in order to avoid an economic crash. Ideally, the Federal Reserve will raise them very slowly so as to protect the economic growth we are currently seeing.

The dollar was trading lower against a basket of currencies. Prices for longer-dated U.S. Treasuries rose marginally and stocks on Wall Street were mixed. The labor market is considered to be close to or at full employment. Nonfarm payrolls increased by 223,000 jobs in May and the unemployment rate dropped to an 18-year low of 3.8 percent.

The jobless rate, which has declined by three-tenths of a percentage point this year, is now at a level where the Fed projected it would be by the end of this year.

The number of people receiving benefits after an initial week of aid increased 21,000 to 1.74 million in the week ended May 26. The four-week moving average of the so-called continuing claims dropped 13,250 to 1.73 million, the lowest level since December 1973.

…The strong job market conditions were also underscored by the publication on Thursday of the Labor Department’s Contingent and Alternative Employment Arrangements survey, which showed 1.3 percent of U.S. workers in May 2017 held jobs they considered temporary or did not expect to last beyond a year.

That is a decline from 1.8 percent in February 2005 when the government last conducted a similar survey.

When self-employed individuals and independent contractors were included, the share of workers was 1.6 percent in May 2017, down from 2.3 percent in February 2005. Most contingent workers were under the age of 25.

The Labor Department will publish its Contingent Worker Supplement report in September. It is expected to shed light on the so-called gig economy.

Like him or not, President Trump is a successful businessman who understands how economics works. It might be a good idea in the future to elect businessmen to the presidency instead of politicians.

The Obama Administration has proudly announced an unemployment rate of 4.6% for November 2016. That’s nice, but that isn’t the real story.

CNS News posted a story yesterday explaining the 4.6 % number and using some other numbers to put that number in perspective.

Although the “unemployment rate” in the United States for November is 4.6% — a rate last reached 9 years ago in August 2007 – the “real unemployment” rate is much higher, more than double at 9.3% nationwide.

Real unemployment, or the U-6 number, as calculated by the Bureau of Labor Statistics (BLS) includes “total unemployed, plus all marginally attached workers” and part-time workers age 16 and over.

As the BLS explains on its website, the “unemployment rate,” or U-3 number, “includes all jobless persons who are available to take a job and have actively sought work in the past four weeks.”

The other number that is important is the workforce participation rate. The chart below from the Bureau of Labor Statistics illustrates how that number has changed during the Obama Administration:

The article at CNS News concludes:

The real unemployment rate has been in the 9’s since October 2015.

The 4.6% unemployment rate sounds wonderful, but since it does not include those Americans who are out of work and no longer looking for work, it is not a meaningful number. The American economy has not prospered under President Obama. Hopefully, putting a successful businessman in the White House will change the American economy for the better. 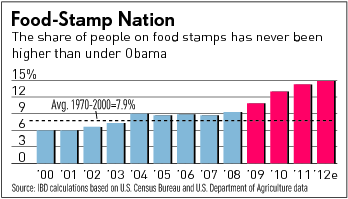 A sharp drop in the number of weekly jobless claims filed last week was caused by the failure of one large state to report all of its claims, a Labor Department spokesman confirmed to FOX Business.

Initial jobless claims, which are a measure of the number of people recently laid off, fell by 30,000 to a seasonally adjusted 339,000, the lowest level in more than four years.

But the Labor Department spokesman said the numbers were skewed by one large state that underreported its data. The spokesman declined to identify the state, but economists believe California is the only state large enough to have such a significant impact on the overall numbers.

Evidently, the state that did not report their numbers forgot to include that stockpile of unprocessed claims in their tally for this week (which is the first week of a new calendar quarter),

This is the equivalent of saying all of your bills are paid because you are haven’t gotten to the pile of bills you left on the kitchen table. We are truly in the silly season and need to discount at least ninety percent of what we read or hear from the media. Just for the record, the number will be revised upward, but at a time when no one is paying attention.