The Labor Department’s Bureau of Labor Statistics released its jobs numbers for June this morning. CNS News posted the numbers.

This is the Labor Force Participation Rate chart taken from the Bureau of Labor Statistics:

As you can see, the Labor Force Participation Rate is fairly steady and moving upward.

The Labor Department’s Bureau of Labor Statistics also said the number of employed Americans — which set records in February, March and April — set another record in June, at 153,168,000 employed.

And the number of Americans not in the labor force — after four straight monthly gains – dropped a bit to 94,813,000.

There is still a lot that needs to be done to put Americans back to work, but we are moving in the right direction. Cutting back on federal regulations should help stimulate the economy, but that impact of cutting those regulations may not be immediately felt.

In a June 29, 2017 update, the Congressional Budget Office said it expects the U.S. labor market to tighten in the next two years, as greater demand for workers will push the unemployment rate down and the labor force participation rate up.

The projected demand for workers will encourage more people to participate in the labor force, temporarily offsetting the projected decline in participation arising from such factors as the ongoing retirement of baby boomers.

CBO projects that the unemployment rate will remain around 4.3 percent by the end of 2017 and then drop further to 4.2 percent in early 2018.

The Bureau of Labor Statistics website includes these two charts that give a clearer picture of the American economy: 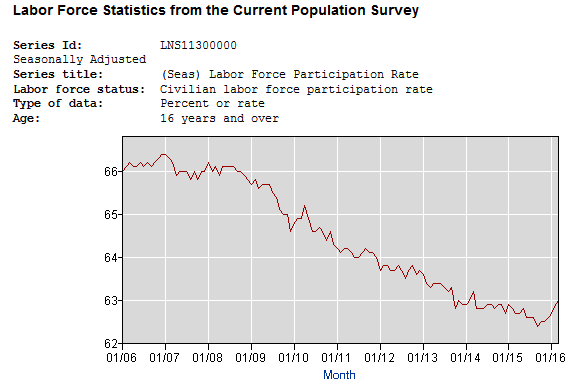 As you can see, we have been losing ground since 2007. It is time to shrink government, limit government regulations, and allow Americans to prosper. Consider this as you decide how to vote in the upcoming election in November. Hillary Clinton would be the third term of President Obama. If we want the above numbers to change, we need to vote for someone who will change our economic direction.

President Obama is not running for office this year. However, he has not hesitated to tell anyone who will listen what a great President he has been. Some of us aren’t convinced.

On Friday, The New York Post posted an article about President Obama’s recent claims about the economy.

‘Anybody who says we are not absolutely better off today than we were just seven years ago, they’re not leveling with you. They’re not telling the truth,” Obama said last week. “By almost every economic measure, we are significantly better off.”

The article then goes on to report some of the actual statistics:

I don’t think we can afford another four years of this sort of economic success.

Yesterday The Washington Times posted an article about America‘s shrinking labor force. Although the unemployment rate is reported at 5.1 percent, that does not take into account the number of Americans who have given up looking for work.

The “unemployment rate” most often cited in the news media is U-3. But U-3 ignores everyone who hasn’t actively looked for work within the previous four weeks. So if you can’t find a job and give up looking, you don’t count as “unemployed” in the U-3 rate.

If we calculated the illiteracy rate that way, we wouldn’t count someone as illiterate unless he had attended a reading class in the past four weeks. In other words, the U-3 figure is fake, because it ignores whether the labor force participation rate has dropped.

According to Diana Furchtgott-Roth, former chief economist at the Labor Department, if America today had as high of a labor force participation rate as we had in 2006, then “last year’s average unemployment rate would have been 11.4 percent instead of 6.2 percent.”

So the U-3 measure of unemployment creates the illusion that the economy is serving American workers roughly twice as well as it really is, when you consider all the persons who’ve given up looking for jobs.

Today’s labor force participation rate is 62.6 percent, a 38-year low. That depressed number wipes out all the gains in employment made during the Reagan era, a time when women by the tens of millions moved into the workforce.

Today, more women are on food stamps than have full-time jobs.

If the economy is doing so well, why are more women on food stamps than have full-time jobs?

The article goes on to explain that before the housing bubble burst, the American economy grew at a rate of about 3.1 percent a year. Since President Obama has been in office, the growth has been slightly over 2 percent. Slow growth is expected to continue due to President Obama’s policies–ObamaCare and excessive Environmental Protection Agency regulations on energy production are expected to have a serious negative impact on economic growth.

Even worse: That idea of a “new normal” 2.1 to 2.2 percent annual growth rate may be overly optimistic. We have yet to see the effect of many recent and proposed anti-growth policies — for example, Obamacare, which is being phased in over a period of years, and the Environmental Protection Agency’s proposed plan, not yet final, to make the price of electricity “skyrocket.” If anti-growth policies push the economic growth rate down to around 1.6 percent a year, that’s like cutting the size of the 2063 economy in half. Long before that, government finances will collapse.

Elections matter. Unless we change those making policy in Washington, D.C., we will become Greece.

The chart below is taken from YCharts: 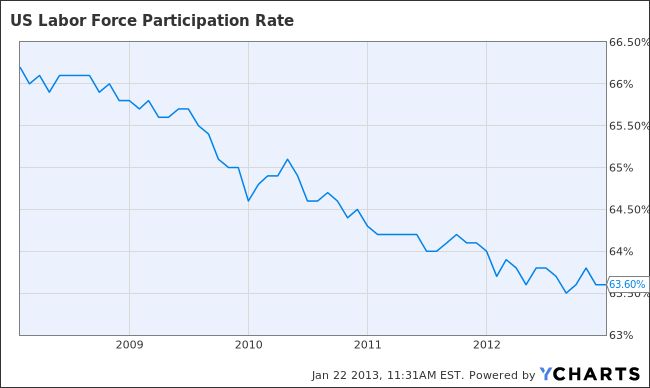 The chart above shows what has happened to the labor force in America since 2009. These are the worst labor participation rates since 1978, Unless Washington begins to get its fiscal house in order, these numbers will become the new normal for Americans.