The tension between America and China is growing. There are reports out of China that the Chinese Communists are preparing to move on Taiwan. Many people assumed that after Hong Kong was brought under control, Taiwan would be the next step. Meanwhile, the Trump administration has ordered the closing of the Chinese consulate in Houston.

Just the News posted an article about the closing of the consulate today.

The Trump administration said Wednesday that it has ordered China to close its consulate in Houston “to protect American intellectual property,” the most recent episode in a growing divide between the two governments over such concerns as trade, the coronavirus, human rights and security.

Firefighters responded to reports of papers being burned on the consulate grounds Tuesday night but were barred entry, according to Houston news media reports.

The consulate was informed Tuesday of the decision, according to the Associated Press.

The Chinese foreign ministry reportedly called the move “an outrageous and unjustified move that will sabotage relations between the two countries.”

The ministry is also warning about countermeasures, the wire service also reports. The U.S. has an embassy in China and reportedly five consulates on the mainland.

Unfortunately, the relationship between America and China will probably get worse before it gets better. China has suffered economically because of the coronavirus and needs an enemy to unite its people as its economy suffers. The move on Hong Kong did not really draw a strong response from western countries, so they may be willing to gamble that this is the time to end Taiwan as a separate country. Stay tuned.

By now most Americans have realized that China is not our friend–they have stolen intellectual property for years, the have manipulated their currency to gain trade advantages, and they have gifted the world with the coronavirus. Well, someone in Washington is attempting to take action to prevent further bad behavior.

The Washington Free Beacon reported yesterday that Republican Senator John Kennedy and Democratic Senator Chris Van Hollen sponsored a bill in the Senate that could prevent some Chinese companies from listing their shares on U.S. exchanges unless they follow standards for U.S. audits and regulations. The bill passed by unanimous consent. It still has to pass the House of Representatives and be signed by President Trump.

“The Holding Foreign Companies Accountable Act” bars securities of any company from being listed on any U.S. securities exchange if it has failed to comply with the U.S. Public Company Accounting Oversight Board’s audits for three years in a row.

The measure also would require public companies disclose whether they are owned or controlled by a foreign government.

The bill is written to apply to all foreign companies, but it is targeted at China, and follows intense criticism of Beijing by Republican President Donald Trump that has been echoed by Republican and Democratic lawmakers.

Trump and other officials in his administration insist that China mishandled the novel coronavirus during the early weeks of an outbreak that has spread into a global pandemic that has killed more than 320,000 people and cratered global economies.

“There are plenty of markets all over the world open to cheaters, but America can’t afford to be one of them. China is on a glidepath to dominance and is cheating at every turn,” Kennedy said in a statement.

On Tuesday, Stars and Stripes reported the following:

Two more Chinese nationals have been arrested for illegally taking photographs at a Florida Navy base, court records show.

The arrests over the weekend of Yuhao Wang and Jielun Zhang bring to four the number of Chinese people charged recently with snapping pictures at the Naval Air Station in Key West, Florida.

An FBI affidavit says Wang and Zhang drove up to an air station annex entrance and were told by a security officer they could not enter the property without military identification. The FBI says the pair drove onto the base anyway and were apprehended by authorities about 30 minutes later after taking photos of structures on the base.

…The arrests follow two similar cases involving Chinese nationals taking photos at the Key West base. On Dec. 26, Lyuyou Liao was charged with illegally taking pictures at another annex of the Naval Air Station.

Liao, 27, is being held without bail. His lawyer argued at a recent hearing that Liao was on vacation taking pictures and that evidence of any crime is thin.

China has a history of freely helping itself to the military technology of America. Trade deals make during the Clinton administration advanced the missile program of China between ten and fifteen years. China also has little respect for intellectual property rights. Hopefully any trade agreement signed with China will take its past behavior into consideration.

It is no surprise that trade negotiations with China have moved slowly. President Trump is attempting to level a playing field that has been tilted for a long time. China has manipulated its currency to gain trade advantage, China has stolen intellectual property, and China has used slave labor to manufacture products at ridiculously cheap prices. We have looked the other way, ignoring human rights abuses. We have also looked the other way in terms of the censorship of speech in China. Google has helped develop a search engine that will meet the requirements of the Chinese censors. We have complied with things that are against our principles for the sake of money. The trade deal being negotiated is not going to change that, but at least it will be a beginning attempt to level the playing field.

Fox Business is reporting today that the U.S. and China agreed to a “phase one deal” in the trade war.

The deal, which has been agreed to in principle and will take three to five weeks to write, includes China agreeing to raise its agricultural purchases to between $40 billion and $50 billion from $8 billion to $16 billion, in addition to making reforms on intellectual property and financial services. The U.S. will not be raising tariffs from 25 percent to 30 percent on Oct. 15. A decision has not yet been made on the tariff increase scheduled for Dec. 15.

A comprehensive trade deal will have two or three phases, according to Trump. China’s trade team is calling the agreement a “pause” in the trade war, and not a deal.

China is not a free country, and the Chinese negotiators who are working out this trade deal will pay a high price if the deal is not totally acceptable to the leadership in China. The fact that a phase one deal has been reached is good news, but China does not have a great track record on keeping promises or abiding by trade agreements.

America has been on the wrong end of bad trade deals for a long time. We watched our manufacturing jobs leave America after NAFTA. We watched the steel industry disappear after being undercut by Chinese steel held up by subsidies by the Chinese government. President Trump is a businessman. As a businessman, he is trying to level the trade playing field. In some areas he is getting cooperation at home and abroad; in some areas he is not. China has been a difficult country to deal with regarding trade. The uneven playing field they have enjoyed for years has been very profitable for them. Because their economy is based on an uneven playing field, they are reluctant to make changes. Their economy is currently struggling, and if President Trump stands his ground, the Chinese economy could face serious challenges. That’s where we are. There is, however, some positive news about where we might be headed.

Ed Morrissey at Hot Air posted an article today about a possible breakthrough in the talks with China.

Did China finally blink in Donald Trump’s trade war? Trump himself seems to think so. At the G-7 summit, Trump told reporters that a statement earlier in the day from a top official in Beijing showed that China had finally expressed a real interest in redefining the trade relationship between the world’s top two economies. It’s “the first time” that Trump sees China acting in good faith, he said

After rapid-fire escalations in tariffs by both sides, China’s vice premiere called for “calm.” Liu He also declared Beijing’s willingness to conclude a trade agreement and called for talks to begin immediately:

“We are willing to resolve the issue through consultations and cooperation in a calm attitude and resolutely oppose the escalation of the trade war,” Liu, who is President Xi Jinping’s top economic adviser, said, according to a government transcript.

“We believe that the escalation of the trade war is not beneficial for China, the United States, nor to the interests of the people of the world,” he added.

U.S. companies are especially welcome in China, and will be treated well, Liu said.

“We welcome enterprises from all over the world, including the United States, to invest and operate in China,” he added.

“We will continue to create a good investment environment, protect intellectual property rights, promote the development of smart intelligent industries with our market open, resolutely oppose technological blockades and protectionism, and strive to protect the completeness of the supply chain.”

The last time we thought we had a deal, the person who made the deal was executed when he returned home. Hopefully this time will turn out better for everyone. 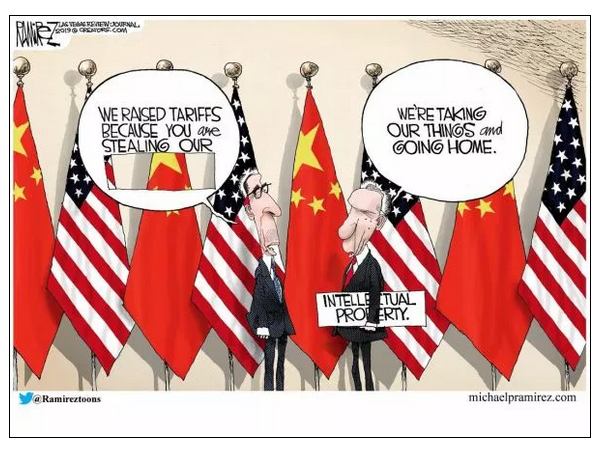 This is what you will see when to go to Wikipedia today:

For over a decade, we have spent millions of hours building the largest encyclopedia in human history. Right now, the U.S. Congress is considering legislation that could fatally damage the free and open Internet. For 24 hours, to raise awareness, we are blacking out Wikipedia. Learn more.

The U.K. Telegraph posted a story today about the Stop Online Piracy Act (SOPA) and the Protect Intellectual Property Act (PIPA). Congress will be voting on the bill today. The intentions of SOPA are valid–stop the piracy of intellectual private property–it’s just that Congress, as usual, has gone overboard.

Spurred on by big media companies, the latest effort by governments to stamp out piracy comes in the form of two bills from the US Congress: the Stop Online Piracy Act (SOPA) and the Protect Intellectual Property Act (PIPA).

According to these acts, if a US site (or a foreign site that has its domain name registered in the US) is found to be “committing or facilitating the commission” of copyright infringment, then, on the request of a rights holder, it is subject to seizure in a way that many scholars believe violates due process, depriving people of a fair hearing and suppressing free speech.

One of the major problems with SOPA is the lack of due process. Unfortunately, our current Justice Department has a very uneven record on law enforcement–prosecutions often have a political aspect (Fast and Furious, Black Panther voter intimidation, the list goes on). Do we really want to give the government the power to shut down an Internet site? Will SOPA prevent me from quoting the sites I reference? Will SOPA allow the government to shut down any site that disagrees with the administration politically? There are simply too many unanswered questions.